While welcomed by many Iranians, President Hassan Rouhani’s trip to Europe, which involved extensive deal making, has triggered a backlash among hard-liners in Iran. 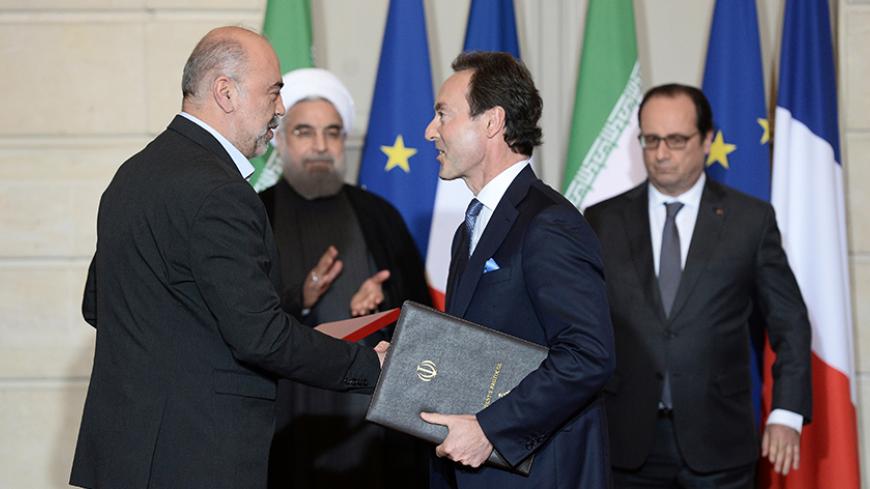 TEHRAN, Iran — Many Iranians welcomed President Hassan Rouhani’s recent tour of Italy and France, during which billions of dollars in deals — including the purchase of 118 new Airbus passenger jets — were hammered out. However, the hard-liners in Iran have been raging against the tour, considering it a major humiliation.

The first salvo came from historian Hussein Dehbashi, a critic of Rouhani, who penned a post on his Facebook page in which he slammed the Iranian president for appearing in a room dominated by a giant bronze statue of Marcus Aurelius at his joint press conference with the Italian prime minister. “[Roman Emperor] Marcus Aurelius [161-180] defeated Iranians in the era of the Parthian Empire. Why did the advisers of President Rouhani not pay attention to that?” Dehbashi wrote. Hard-line outlets warmly welcomed this censure, following Dehbashi’s lead in attacking Rouhani.

“The West is seriously concerned about Iran becoming a regional power, and namely the expansion of Iran’s strategic depth in Iraq and Syria. What kind of message would this send to people when Rouhani is inking contracts in Rome and under the hooves of the horse of Marcus Aurelius, who took a part of Iraq and the Levant from the Parthians?” the hard-line Nasim news agency wrote.

Meanwhile, Iran’s Quds newspaper argued that Marcus Aurelius didn’t conquer modern-day Iran and never set foot in the Parthian Empire, but merely dispatched an army that succeeded in taking over Seleucia — a city on the Tigris that was a major Mesopotamian city of the Seleucid, Parthian and Sassanid empires. Quds further explained that after a while, a contagious disease forced the Romans to leave.

Fayaz Zahed, a political analyst, told Al-Monitor, “It is highly unlikely that the Italian government, which did its best to observe protocol during President Rouhani’s trip, would try to disparage Iran by forcing Rouhani to stand next to a statue. They even covered the nude statues, which is a part of their identity, just to respect Iran’s president.” He added, “This is just a propaganda war [waged] by Rouhani’s opponents. It is funny that we didn’t even hear a peep from them when [Mahmoud] Ahmadinejad sat under the tableau of the fake name of the Arabian Gulf.”

The next attack by hard-liners came when Rouhani left Rome for Paris. Laurent Fabius, the French foreign minister, officially welcomed Iran’s president at the Les Invalides complex. Hossein Shariatmadari, editor of the hard-line daily Kayhan, told Iranian media, “Rouhani humiliated the Iranian nation by agreeing to be welcomed by the French foreign minister.” Iranian state television, which is controlled by hard-liners, also expressed wonder and astonishment over this matter.

Despite the ruckus, it was later revealed by moderate Iranian media outlets that Rouhani was in fact welcomed at the highest possible level in France, as the Jordanian and Spanish kings were also welcomed by the premier and foreign minister during their visits to Paris.

In an article published by Iranian news outlet Entekhab, law researcher and Al-Monitor contributor Reza Nasri wrote that French President Francois Hollande not only welcomed Rouhani at the Perron de l'Elysee in the presence of the Garde Republicaine, but also rolled out the red carpet and walked down the steps in his honor. In Nasri’s telling, the manner in which the French president welcomed his Iranian counterpart was above and beyond the common standard.

Iranian Foreign Minister Mohammad Javad Zarif also responded to the criticism of the French reception of Rouhani: “The French government observed the highest protocols during President Rouhani’s trip to Paris. I’m really ashamed that some people with the very aim of proscription are saying that the French foreign minister received our president in an unusual manner. You should see who received the Indian prime minister or even Mr. Putin in France. Do we also welcome a foreign official before the formal welcoming by the president? Why do you try to turn our pride into humiliation?”

While in France, Rouhani signed a $25 billion deal with Airbus to buy 118 passenger jets and also a $430 million contract with carmaker Peugeot. The ink on both deals was barely dry when other Iranian hard-liners furiously attacked the Iranian president for signing such agreements. The head of the paramilitary Basij, Mohammad Reza Naghdi, accused Rouhani of hurting the “resistance economy” by signing contracts in France and Italy. “Buying aircraft from Airbus has imposed a cost of 128 billion [dollars] for Iran, and this will be of no help for resolving the unemployment issue in our country.” Moreover, Hossein Safar Haranadi, a former culture minister under ex-President Ahmadinejad, said, “Is signing a contract with Peugeot our priority? I have heard that Peugeot’s workers who had been laid off celebrated the [nuclear] deal after hearing about the contract. But our workers in Iran are currently sad.”

In response to the criticism, Vice President Eshaq Jahangiri said, “It is unfair to the supreme leader to say that President Rouhani’s visit to France and Italy was a stab in the back of the resistance economy.” Jahangiri then described the critics of Rouhani’s efforts in his first European visit since taking office as the same people who opposed the Joint Comprehensive Plan of Action of July 14, 2015. “During the nuclear talks, these guys used to say that it is not possible to reach an agreement and witness the lifting of sanctions,” he said.

With attention on the warm reception of his European tour by many Iranians, it seems that Rouhani is buying planes to make people really feel the post-sanctions era that has been brought about after the nuclear deal. In addition, the deals inked in Europe will help Rouhani attract more votes for moderates in the upcoming parliamentary and Assembly of Experts elections and keep people away from the hard-liners, who oppose such contracts and are held accountable for the sanctions.

Zahed said, “The purchase of 118 aircraft by Rouhani was a symbolic move, because any time a plane crashed in Iran, people would blame the sanctions.” He added, “We shouldn’t expect hard-liners to welcome Rouhani’s success. They are upset, because Rouhani’s achievement may lead the moderates and Reformists to gain victory in the parliamentary elections, and more importantly, it may guarantee a second term for Rouhani.”