5 Rouhani allies in the crosshairs of Iran's hard-liners

In the months leading up to Iran’s May 19 presidential election, conservative opponents will likely focus on incumbent President Hassan Rouhani's inner circle. 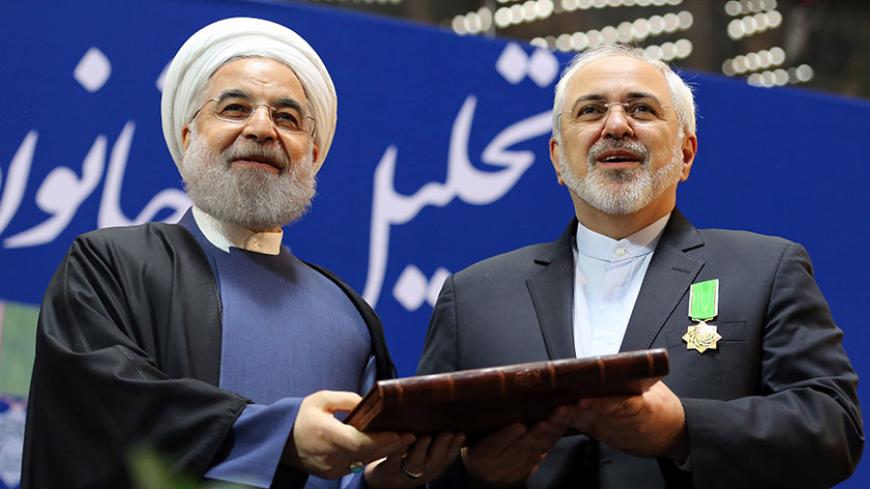 Iran’s upcoming presidential election is set to be contentious, pitting the ruling coalition of moderates and Reformists against hard-line conservatives. As moderate incumbent President Hassan Rouhani seeks a second term, his opponents are striving to reach a consensus over a single candidate — a prospect that appears unachievable given deep disagreements among conservatives, with former chief nuclear negotiator Saeed Jalili and Ayatollah Mohammad-Taghi Mesbah Yazdi’s hard-line Endurance Front opting not to join a grand coalition. Whether the conservatives back only one or several candidates, Rouhani certainly faces tough days ahead. As the only candidate of the moderate-Reformist coalition, he will have to deal with not only direct attacks by his opponents but also likely revelations and leaks targeting his inner circle.

The hard-liners have five main Rouhani allies in their crosshairs:

Iran's chief nuclear negotiator has been one of the most frequent targets of the hard-liners, mainly over his foreign policy approach. His management of the 2013-2015 negotiations with six world powers to resolve the Iranian nuclear crisis faced great domestic opposition, with the hard-liners accusing Rouhani and his foreign minister of betraying the country and conceding too much to the West. After the nuclear deal was finally reached in July 2015, the attacks didn’t stop. Instead, the criticism intensified as hard-liners argued that Iran had received nothing in return for curbing its nuclear program. This conflict remains heated and will probably be dragged into the presidential debates. It should be noted that in the 2013 presidential debates, Rouhani — who was then campaigning on a promise to end the nuclear crisis, and slamming the negotiation methods of rival candidate and then-chief negotiator Jalili — was in turn accused by Jalili of bowing to pressure from the West and being deceived by the 2003 Tehran Declaration signed with Britain, France and Germany. Iran had agreed to temporarily freeze uranium enrichment for the duration of the talks, but in 2005, under US pressure, the Europeans demanded that the freeze be made permanent rather than a condition for further negotiations.

When he took office, Iran was suffering from rampant inflation, an unemployment rate of 12.2%, a recession, and major currency volatility — all inherited from the administration of hard-line President Mahmoud Ahmadinejad. Tayebnia, who is known for his anti-inflation efforts, has brought Iran's runaway inflation down to single digits. He is also credited for turning the negative growth rate positive even before the lifting of sanctions last year. But his efforts have not protected him from attacks. Following the nuclear deal, hard-liners purposefully raised people’s expectations of the landmark accord’s impact on the economy and are now publishing negative reports about the low purchasing power of ordinary Iranians and complaining about the “inability” of the government to fix the economy. As such, despite Tayebnia’s performance — verified and commended by the International Monetary Fund and the World Bank — it seems the pressures on him and Rouhani will increase as election day nears.

Since the first days of the Rouhani administration, and even before he was confirmed by parliament, Zanganeh was grilled by conservatives over his role in the 2001 Crescent contract, during which he also served as oil minister. Hard-liners claim the contract was executed through a middleman and that it arranged for the exportation of Iranian natural gas to the United Arab Emirates at an unusually low price. Past issues aside, Zanganeh has overseen since 2013 a boost in crude oil production to pre-sanctions levels of 3.9 million barrels a day, while new oil contracts are expected with major international oil companies. However, hard-liners have seriously criticized the contracts on the basis that too many concessions have been granted to Western firms.

Along with Zarif, Ghazizadeh Hashemi is considered one of Rouhani’s trump cards in the May 19 vote. The implementation of what has been labeled "RouhaniCare," a plan that has many parallels to the US Affordable Care Act or "ObamaCare," has meant that more than 10 million Iranians who were unable to pay steep health care bills are now covered by insurance. This feat has been welcomed even by some conservatives, but it has not protected the health minister from hard-liner attacks. Ghazizadeh Hashemi was recently grilled on live state TV by a presenter who questioned his ability to counter corruption and maintain the health care plan. Hard-liners now claim that the plan has failed, prompting Ghazizadeh Hashemi to protest that the Iranian public disagrees with such characterizations.

The moderate politician and Rouhani's younger brother has been one of the most controversial figures in Iranian politics over the past years. At first, he was not well known, always seeking to work from behind the curtains. However, gradually, perhaps because of the trust stemming from his literal fraternity with the president, Rouhani entrusted him with special tasks, including playing a role in the nuclear talks and meeting with various figures such as opposition leader Mehdi Karroubi, who has been under house arrest since 2011. Conservative media outlets regularly accuse Fereydoun of financial corruption. He was most recently tied to jailed tycoon Babak Zanjani, and some hard-liners have called for his detention. So far, none of the corruption allegations have been proven.

Perhaps needless to say, Rouhani is thus bracing himself for a heated war in the coming months, as his hard-liner foes are expected to use every means available to undermine him ahead of the elections — including the usual airing of dirty laundry. The climax of this war will likely be the presidential debates, traditionally an arena for discrediting one’s rivals on live television.