Iran nuclear diplomat known to US as tough, professional

Prior to the nuclear negotiations, Iran Deputy Foreign Minister Sayed Abbas Araghchi impressed the United States at the Iraq summit in 2007, as a popular and poised envoy to Japan. 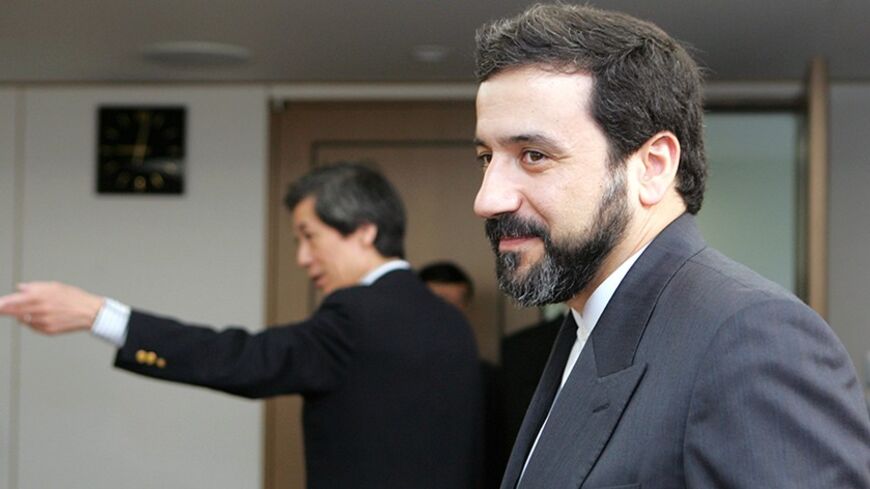 When lead US negotiator Undersecretary of State Wendy Sherman and Iran Deputy Foreign Minister Seyed Abbas Araghchi and their teams met on the sidelines of nuclear talks in Vienna this week, US officials described the now commonplace encounter between the US and Iranian delegations as “useful and professional.”

“It’s now normal,” a senior US administration official, speaking not for attribution, described the bilateral meeting with Araghchi to journalists at a briefing in Vienna on April 9. “We met for about an hour and a half. … We make sure that Iran understands our perspective on all of the issues under discussion, and they’re able to tell us directly their views about our views.”

"Mr. Araghchi is a very professional negotiator and also a tough negotiator,” Sherman told Al-Monitor by email on April 11.

Araghchi, 53, the lone holdover from Saeed Jalili’s nuclear negotiating team, has previously served as Iran’s envoy to Japan, Asian affairs deputy and briefly during Iran’s presidential campaign and transition last summer, as the spokesman for Iran’s Ministry of Foreign Affairs.

Since Hassan Rouhani tapped Mohammad Javad Zarif as Iran’s foreign minister and lead nuclear negotiator last August, Araghchi has been a key player in the nuclear talks that produced an interim deal last November, and a principal interlocutor in bilateral discussions with the United States aimed at advancing a comprehensive nuclear accord.

While Zarif’s willingness to engage with US officials was perhaps not surprising — the affable Iranian diplomat spent almost 20 years in the United States, earning graduate degrees and serving as Iran’s UN envoy in New York during the moderate Mohammad Khatami administration — his deputy Araghchi is less well-known to Western audiences.

Though Araghchi earned a doctoral degree at Kent University in the United Kingdom and speaks fluent English, he is not one of Zarif’s so-called “New York gang” or “New Yorkers,” as the Iranian diplomats who studied in the United States and served with Zarif in New York have been dubbed at home. A career diplomat who ascended under then-Iran Foreign Ministers Ali Akbar Velayati and Kamal Kharazi, Araghchi is “not political,” an Iranian scholar, speaking not for attribution, told Al-Monitor. But it turns out that Araghchi was not entirely unknown to US officials before he was tapped as Zarif’s deputy last August and became part of the Iranian delegation that secretly met with US officials a half dozen times in Oman, New York and Geneva last fall to try to advance a nuclear deal.

Interviews with former officials by Al-Monitor and US diplomatic cables indicate that Araghchi had a previous engagement with the Americans, at a regional summit in Iraq in March 2007, in which he impressed one observer as “extremely professional,” and constructive in the proceedings, in a rare departure from what were otherwise frustrating and unproductive US-Iranian encounters on Iraq at the time.

Araghchi subsequently appeared on the Americans’ radar as a highly effective and press-savvy Iran ambassador to Japan in 2008, in a move some US diplomatic interlocutors read as an effort by the Iranian Foreign Minister Manouchehr Mottaki to “protect” Araghchi from Iran’s hard-line then-President Mahmoud Ahmadinejad, US diplomatic cables show. Other US cables suggest that Araghchi played a quietly helpful background role in urging for the release of an Iranian-American reporter acquaintance, Roxana Saberi, who was arrested in Iran in January 2009.

“Araghchi is a young, personable, polished and accomplished diplomat who presents well, argues his case calmly and rationally and who is clearly at ease making public presentations and dealing with the press,” then-US Ambassador to Japan Thomas Schieffer wrote in a March 2008 diplomatic cable to Washington about his newly arrived Iranian diplomatic counterpart in Tokyo.

One Japanese diplomat “told Embassy Tokyo,” Schieffer’s cable continued, “that former Foreign Minister Taro Aso speculated after meeting him … that if the US and Iran were to resume diplomatic relations, Araghchi would be a likely candidate to become ambassador to Washington.”

Araghchi, then — as now — Iran’s deputy foreign minister for international and legal affairs, led Iran’s delegation to a summit of Iraq’s neighbors in Baghdad in March 2007, attended as well by then-US Ambassador to Iraq Zalmay Khalilzad and then-State Department Iraq coordinator David Satterfield. The meeting came amid growing US frustration at Iran’s support for Iraq “special groups” conducting attacks against US-led coalition and Iraqi forces. Iran denied providing such support, while at the time making repeated overtures to the Americans that it would be interested to engage on Iraq, US cables show. The United States pursued several trilateral meetings with the Iranians on Iraq during 2007, but ultimately determined they were fruitless and counterproductive. But not so at the first meeting attended by Araghchi in March 2007.

“That recollection stays with me … the wholly professional conduct of the Iranian delegation, but particularly the Deputy Foreign Minister [Araghchi], which was quite striking,” a firsthand observer of the meeting, who requested to speak anonymously, told Al-Monitor in an interview on April 10.

The Iranian delegates, led by Araghchi, were “very professional, correct and polite,” at the meeting, but they were “not cordial or friendly,” he said. “We did not engage in chitchat. … The conversation was focused solely on the conference and the outcome of the conference.”

“While there was an exchange at the conference over Iran’s behavior in Iraq [about] actions which threatened Iraq’s security, when it came to the formal work of the conference, in particular the drafting of the concluding statement, I was struck, and remain struck to this day, that in the end the Iranian delegation was critical to achieving consensus on a statement regarding respect for Iraq’s security which the Syrian delegation, headed by [Deputy Foreign Minister] Faisal Mekdad, had opposed,” the firsthand observer at the Baghdad meeting said.

“And I still recall what an amazing circumstance it was in which the Iranians — and not just in private discussions with delegations, but openly — [were] confronting the Syrians over the intransigence of the Syrian position,” the attendee at the March 2007 Baghdad meeting said. “The Iranians were clearly unhappy with this. They were out of patience with the Syrian delegation’s performance and were quite abrupt with them on the floor as we attempted to get closure on the statement.”

The US claim that Iran supports militants in Iraq is “false,” Araghchi said at a Baghdad news conference following the summit on March 10, 2007.

However struck US officials might have been with Araghchi’s professional performance at the March 2007 Baghdad meeting, further US-Iran encounters on Iraq in May and July 2007, led by then-US Ambassador to Iraq Ryan Crocker and Iran’s then-Ambassador to Iraq Hassan Kazemi-Qomi, were ultimately deemed counterproductive by the United States.

“We came to the conclusion that the discussions had not produced any progress at all,” the observer at the 2007 Baghdad meeting told Al-Monitor. “And it was used by Iran against us. Iran would tell other international partners, including the Europeans, 'Don’t talk to us about the nuclear program or terror or human rights. We are conducting a private dialogue with the Americans. You don’t know what’s going on.'”

“We faced the classic negotiators’ dilemma … no progress, no substantive benchmark to judge if the talks were succeeding,” the source said. “And so like every preceding [US] administration that attempted such talks [with the Iranians], we came to the substantive, not political judgment, that not only were the talks not productive, but they were counterproductive.”

As to whether he thought the recent US-Iran engagement that resulted in the interim nuclear agreement last November was a new chapter, the source advised to judge by the results.

“If you can get it and it’s verifiable, it’s an exceptional achievement, and well worth it,” the source sad. "But you better have a timeline in mind, … and have a specific strategic goal [that doesn’t allow the Iranians] to relieve pressure on themselves while they continue their behaviors unabated.”

A May 2009 US cable from the US charge d’affaires in Tokyo noted Araghchi’s reported efforts on Saberi’s behalf, as relayed by Japanese diplomatic contacts. (Saberi was born in the United States to an Iranian-born father and a Japanese-born mother.) “On the margins of the meetings, the Japanese also discussed Saberi's case with Iranian Ambassador to Tokyo Seyed Abbas Araghchi, who was in Tehran for the visit,” the cable states.

“Araghchi, who personally knows Saberi … said that he has discussed her case with Iran's National Security Council, which is also involved, and that he continues to hope for a positive outcome.” (Saberi was released from Iran on May 11, 2009.)

Even as the United States, the P5+1 and Iran report progress in nuclear talks in Vienna this week, the United States and Iran continued to trade barbs over Iran’s nominee to be its next envoy to the UN. Given Hamid Aboutalebi’s acknowledged role serving as an occasional translator for the hostage-takers in the 1979 Iran hostage crisis, the White House has called his nomination for the UN envoy post “not viable.” Iran in turn has said the US position is “unacceptable.”

As to the former Japanese Foreign Minister's speculation that Araghchi would be a candidate for Iran envoy to Washington should the US and Iran ever restore diplomatic ties, perhaps New York in the meantime might make more sense.