Though Turkey wiped off six zeroes from its currency a decade ago, politicians stick to old figures, hoping for a stronger propaganda impact in the run-up to general elections. 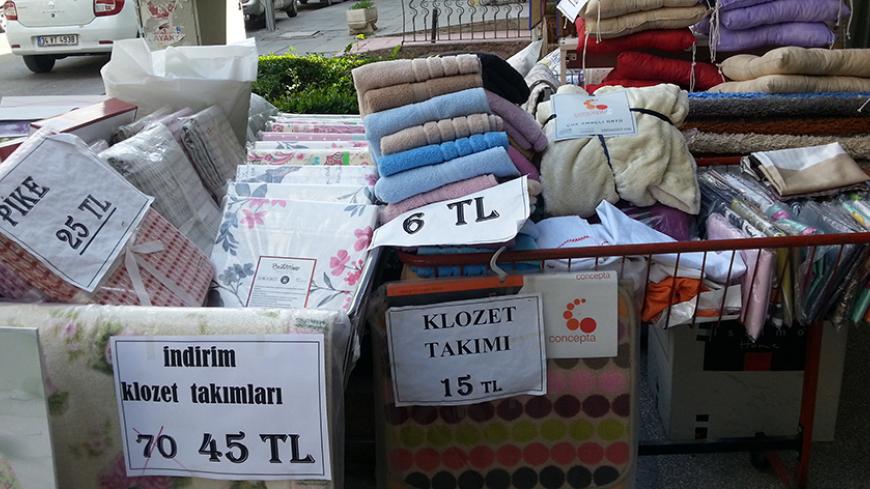 This shop in Ankara, like most stores in Turkey, uses the slimmed-down version of the Turkish lira in its pricing, May 2015. - Tulay Cetingulec

Awesome. In current exchange rates, the figure amounts to more than $2.3 quadrillion. What city could have seen such colossal investment in 12 years? Batman must be the wealthiest place in the world. But no, it is a small, underdeveloped city in Turkey’s southeast, known for rampant unemployment and poverty, along with an extraordinary suicide rate among women.

In another instance, main opposition Republican People’s Party leader Kemal Kilicdaroglu, addressing a crowd in the northwestern city of Tekirdag on Feb. 15, slammed Erdogan’s new palace, a lavish complex built on a protected site despite court rulings barring its construction. “You’ve seen the 1 trillion electricity bill of the illegal palace. I’ll put an end to all this. I’ll put an end to all this siphoning and give the money to retirees and farmers,” he said.

On May 8, 2014, Devlet Bahceli, leader of the second-largest opposition force, the Nationalist Action Party, addressed a rally in Bursa, northwest Turkey, saying, “You know they erected a palace with your honest pennies. They spent 1.37 trillion lira for this illegal, murky palace.”

The figures flying about seemed to have confused Bahceli as well. He actually meant to say 1.37 quadrillion lira, the figure opposition politicians and media usually cite as the cost of Erdogan’s palace.

For example, columnist Mehmet Turker wrote in the leading opposition daily Sozcu on Jan. 18 that “1.37 quadrillion lira were let flowing and the Gentleman got a palace in 18 months.”

On May 15, a dollar was worth 2.59 lira. The amount of money the figures denote is inconceivable. A palace worth 1.37 quadrillion lira! Unbelievable. But there is more.

Addressing a crowd in the southern city of Kahramanmaras on May 9, Figen Yuksekdag, co-chair of the pro-Kurdish People's Democracy Party, said, “The head of the Religious Affairs Directorate rides in a car worth 1 trillion.”

Now, we have a car worth 1 trillion lira, or some $385 million. Where in the world could a car be so expensive? With a quick Internet search, I found a Dubai-based company that has manufactured ultra-luxury sports cars — only seven in total — worth $3.4 million. Yuksekdag must be speaking of a spacecraft.

The examples are abundant. Ordinary Turks speak in multi-zero terms as well. Apartments are being bought and sold for 300 billion lira, or rented for 2 billion lira per month. A bottle of water is worth 1.5 million Turkish lira.

A whole decade has passed since Jan. 1, 2005, when Turkey wiped off six zeroes from its currency, the legacy of years of chronic inflation, and introduced the new Turkish lira. After a four-year transition period, the currency returned to its old name — simply Turkish lira — and got a new sign, which resembles the euro symbol. Most Turks have failed to adapt to the new sign as well.

Only shopkeepers have loyally embraced the new currency. They know that shop windows displaying multi-zero price tags would scare off clients. But they, too, have failed to adapt to the new lira sign. The old one — simply the letters TL — remains in widespread use, making for a mix of a new currency with an old sign.

In everyday speech, the six zeroes remain omnipresent. Beyond the hardship of breaking old habits, Turks are fond of exaggerating. Statesmen, politicians, columnists and citizens alike behave as if the six zeroes were never wiped off.

Hence, the president speaks of a 6 quadrillion investment instead of a 6 billion lira one, the main opposition leader refers to a 1 million lira electricity bill as 1 trillion, and critics slam the 1.37 billion lira presidential palace as a 1.37 quadrillion affair. Similarly, the 1 million lira official car of the religious affairs head becomes a vehicle worth 1 trillion. So, what’s the ordinary citizen supposed to do? He or she follows in the steps of those supposed to lead the change and sticks to the old currency.

But why is it so hard for Turkey to part with the zeroes? I posed the question to Ahmet Tan, a veteran journalist, politician and former culture minister.

“They like it,” Tan said. “Everyone is fond of exaggerating. The multi-zero years had spawned a culture of their own in Turkey. People could not adapt when six zeroes were wiped off at a stroke. Even those who introduced the change have continued to use figures as if the old currency is still in place. Politicians, unfortunately, are fond of using big numbers. The zeroes may have disappeared on paper, but politicians feel unsatisfied to speak in fewer zeroes.”

And now that campaigning is in full swing for the June 7 elections, the ruling Justice and Development Party is keen to embellish its accomplishments with plenty of zeroes. Its election posters boast about “wiping off six zeroes,” but party leaders keep those zeroes in place when speaking of public investments and services. The opposition, for its part, uses the extra zeroes when blasting government spending, hoping for a stronger impact on the masses.

“The zeroes have a powerful propaganda effect,” Tan said. “No one wants to forsake them.”