Turkey’s top official Islamic cleric has found himself in a tight spot after his decision to give up a flashy Mercedes under public criticism prompted a defiant Erdogan to send him an even more expensive car, complete with a pledge for a private jet. 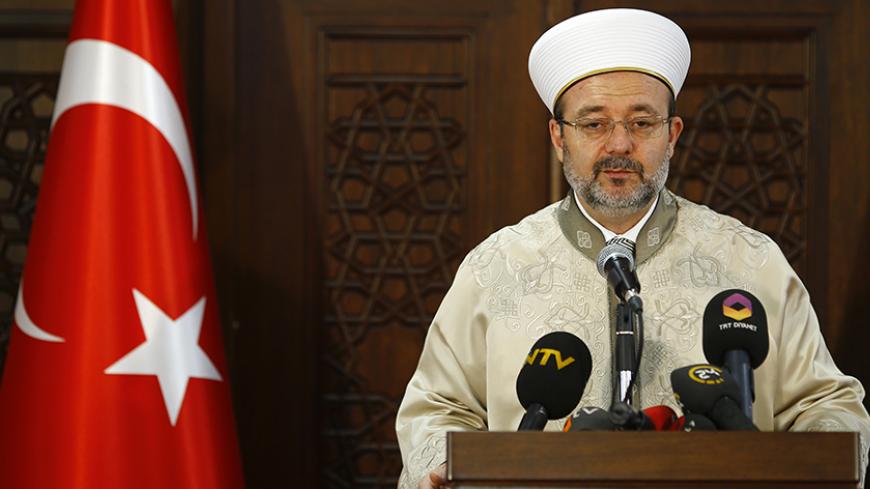 For the past six months, Turkey has been talking about the official car of the head of the Religious Affairs Directorate. It is the first time that the institution, traditionally held in high esteem for representing spiritual virtues, has become embroiled in a controversy over worldly luxuries.

It all started in December, when the popular daily Hurriyet reported that the directorate had bought a top model Mercedes S500, worth 1 million Turkish lira ($376,000), for its head, Mehmet Gormez. The report sparked strong reactions and a prolonged debate, discouraging Gormez from using his new car. Finally, in a televised interview with Haberturk on May 5, he announced he would return the vehicle.

“Something [ordinary for] any institution in Ankara has been exaggerated and made into a spin operation to discredit an institution and its head,” he said. “The moment I realized this, that car became a grave for me. I didn’t use it even once. That’s not possible for me. This turban cannot tolerate any blemish, not even a spot. This post is not just another post. I’ll return the car to set an example for all to see.”

Gormez did return the vehicle. President Recep Tayyip Erdogan, however, was unhappy that the head of the Religious Affairs Directorate (RAD) had backed down in the face of criticism. Speaking to reporters on a flight back from Bosnia-Herzegovina on May 21, he said, “I’ll allocate a Mercedes from the presidential office to our RAD head. Moreover, it will be an armored one.”

A week later, he did send the directorate head an armored Mercedes, even though Gormez had earlier turned down a similar proposal, saying in the Haberturk interview, “Colleagues had suggested that an armored vehicle be purchased for me. I told them, ‘Can there be a stronger armor than the turban and the robe?’”

This time, the opposition media picked on the armored Mercedes, fueling the controversy. Sozcu reported, “The million-lira car has been returned only to be replaced with a 4 million-lira one. … a special production with top-level protection against any long- and short-barreled firearms and hand grenades.”

So now the controversy was about a car that was four times as expensive — and armored, no less. Gormez found himself in a tight spot. He has a vehicle delivered personally by the president and can’t snub the gesture. But should he use the car, he will contradict the strong statements he made earlier. He has yet to be pictured in his new car.

But while Gormez struggled with this dilemma, Erdogan went further, announcing the head of the Religious Affairs Directorate would get also a private jet, saying in an interview with NTV Television last week, “Why wouldn’t they look at the Christian world and the Vatican? The religious leader in the Vatican has a private jet and vehicles — armored vehicles. Why do we ignore that? Are we an ordinary country? While the Vatican has such practices, why should our religious leader travel on commercial planes? I’ll speak to [Prime Minister Ahmet Davutoglu] on this issue so that the head of the Religious Affairs Directorate uses the planes in the pool for his trips abroad.”

That’s how the Vatican entered the fray. In remarks to Turkey’s Dogan news agency, the Vatican’s deputy spokesman Father Ciro Benedettini said, “The pope has neither a private jet nor a helicopter. He never had one. In his trips within Italy and abroad, the pope uses a plane chartered from Alitalia. The Vatican pays for that. Anyone who gets on the plane with the pope has to pay their share. The only privilege the pope has … is that he can sit alone in the front seat.”

In response, anonymous sources from Erdogan’s office told Anatolia news agency: “The plane doesn’t have to be a property of the Vatican or the pope to [classify as] a private jet.”

The exchanges over the plane ended there. But what about the armored vehicle? Why does a religious leader need an armored car?

Al-Monitor posed the question to Mehmet Nuri Yilmaz, a former head of the Religious Affairs Directorate. His first reaction was, “Could there be a threat? An assassination threat could justify the car.”

Yet such a threat has not come. Had there been one, it would have been immediately made public, for it would have made perfect campaign material ahead of the June 7 legislative election.

Yilmaz, the second longest-serving head of the directorate, never once rode in an armored vehicle during his 11 years in office. Did this cause any security problems? “Our people have always shown respect to religious figures,” he said. “Dragging the RAD into political disputes is not a good thing.”

Ihsan Ozkes, former mufti of Istanbul’s central Beyoglu district and now a deputy for the main opposition Republican People’s Party (CHP), stressed that Islam denounces extravagance and waste. “There is a hadith that one should not overuse the water even when performing ablution in a river. Mr. Gormez got an armored vehicle and now they are talking about a plane. I’m not sure whether the armor could protect the RAD head against transgressions,” Ozkes told Al-Monitor.

He argued the prolonged debate over costly items for the directorate has served to distract attention from the luxury and pomp of Erdogan’s new presidential palace. “The RAD is being exploited in politics. The opposition is being portrayed as an enemy of religion for criticizing the overspending,” he said, adding that Gormez should return the armored Mercedes, just as he did with the first one.

CHP leader Kemal Kilicdaroglu charged that Erdogan was “using the RAD to justify his own extravagance.”

Nationalist Action Party chairman Devlet Bahceli urged Gormez to step down. “RAD has become politicized under its current head. … If he has any intention to rid himself and his institution of this exploitation, he should resign, for he seems powerless in restraining the president,” he said.

True to style, the head of the pro-Kurdish Peoples' Democratic Party, Selahattin Demirtas, was arguably the wittiest. “Does that Mercedes protect you against transgressions?” Demirtas asked the head of the directorate. Referring to the narrow bridge that, according to Islam, only true believers will manage to cross on the way to paradise, he added, “For your information, one can’t pass the Sirat Bridge in a Mercedes.”