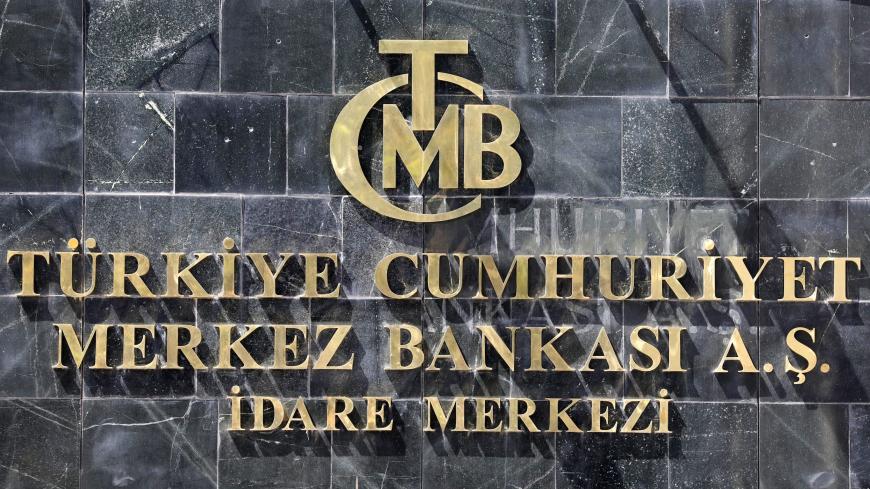 The logo of Turkey's Central Bank is seen at the entrance of the bank's headquarters in Ankara, Turkey, Aug. 14, 2018. - GETTY/Adem Altan

ANKARA, Turkey — Turkey’s Central Bank stunned the markets Thursday, raising interest rates by 6.25% — the highest hike since Recep Tayyip Erdogan became prime minister in 2003. The move strengthened the lira, which has lost 40% of its value this year, and defied Erdogan, who had expressed his aversion to an interest rate increase only hours earlier.

Analysts praised the increase as a long overdue correction for an economy where inflation rose to 18% last month. On Aug. 13, the lira fell to as low as 7.24 against the dollar. In August 2017, the lira stood at 3.5 to the dollar.

“It’s unusual because President Erdogan has been putting a lot of pressure on the Central Bank not to increase interest rates,” said Cem Oyvat, a Turkish economist who teaches at the University of Greenwich in London. Oyvat told Al-Monitor that Thursday’s meeting by the Central Bank’s monetary policy committee was late in coming: ”If the Central Bank had met earlier, maybe they would have kept the dollar-TL rate at lower levels."

The dollar-lira exchange rate see-sawed through the day. In the morning, Erdogan told a meeting of business executives in Ankara, “What is happening today in our economy is not a crisis, but only manipulation. Such manipulative attacks are connected to outside of our country. These days will pass.”

Erdogan went on, “Inflation is a result of the wrong steps [the Central Bank] has taken,” adding the populist refrain: “And who pays the price? The people.” He reiterated his opposition to interest rate hikes and reaffirmed that the Central Bank was independent.

The markets reacted as they usually do when Erdogan talks economics. The lira fell — by about 2%.

However, at 2 p.m. Turkish time, the Central Bank announced it was raising the benchmark interest rate from 17.75% to 24%. Within minutes, the lira rose more than 5%, before settling at about 6.1 to the dollar.

The question is: Will the increase stabilize the economy?

“It was something that had to be done, but the vulnerabilities of the Turkish economy are still there,” Oyvat observed, referring to the foreign debt of the private sector, the current account deficit and the low level of foreign exchange reserves.

Kathleen Brooks of the brokerage firm Capital Index told CNBC, “We doubt that the Central Bank of Turkey will have the teeth to continue to raise rates, thus the surge in the [lira] may not be sustainable over the long term."

The move brings into question the Central Bank’s relations with Erdogan, a president who is a master of enhancing his powers. Before the June elections, he told the press that after polling day he would take steps to ensure that Central Bank listened to him more closely — a comment that sent the lira tumbling.

The financial news agency Bloomberg said its circle of economists had predicted the Central Bank would raise interest rates by an average of 3.25%. The actual increase was almost twice as much. In a sense, the Central Bank proved its independence for once.

However, today’s move could be a flash in the pan. “Interest rates have been kept very low for a long time because of the pressure of Erdogan,” Oyvat commented.

Asked what Erdogan should do to strengthen the Central Bank's independence, Oyvat said, “He should not make comments that would undermine the decisions of the Central Bank.”

This is not likely to happen. Erdogan is a leader who believes that Turks need his advice on issues as diverse as how many children a woman should bear (three) and whether a TV drama about the court of Suleyman the Magnificent is historically accurate.

But the deeper question is why Erdogan quietly relented from pressing the Central Bank to keep interest rates low. One answer could be the severe impact on his popularity from the collapse of the lira.

As Al-Monitor reported earlier this month, the respected polling company Metropoll found that the president, who won the June elections with 52.6% of the vote, saw his approval rating drop to 44.5% in August.

On a lighter note, Turks were captivated Thursday by Qatar’s emir giving Erdogan a plane that was described as a flying palace.

The emir, Sheik Tamim bin Hamad al-Thani, delivered to Istanbul a Boeing 747-8 worth $400 million. Hurriyet reported that such planes normally carry 400 passengers, but this one seats only 70 people because it has been refitted with a presidential bedroom and a dining table that seats 14.

The gesture seems to express the emir’s gratitude to Erdogan for support in Qatar’s quarrel with other member-states of the Gulf Cooperation Council. When the emir visited Ankara last month, he pledged $15 billion worth of investment in Turkey. (US National Security Adviser John Bolton commented that the pledge was “utterly insufficient to have an impact on Turkey’s economy.”)

From the extravagant to the ridiculous: A young woman became extremely frustrated when a post office ATM in the southern resort of Antalya refused to give her cash or return her bank card.

She knocked over a flower pot and kicked the glass wall of the post office. Finally, the 24-year-old woman, identified as Dilara A, lay down on the pavement and waited, according to Demioren News Agency. Eventually police arrested her.