Inflation has hit a new recent high of 25% in Turkey and the president's son-in-law and finance minister is struggling to convince the public his anti-inflation plan is getting anywhere. 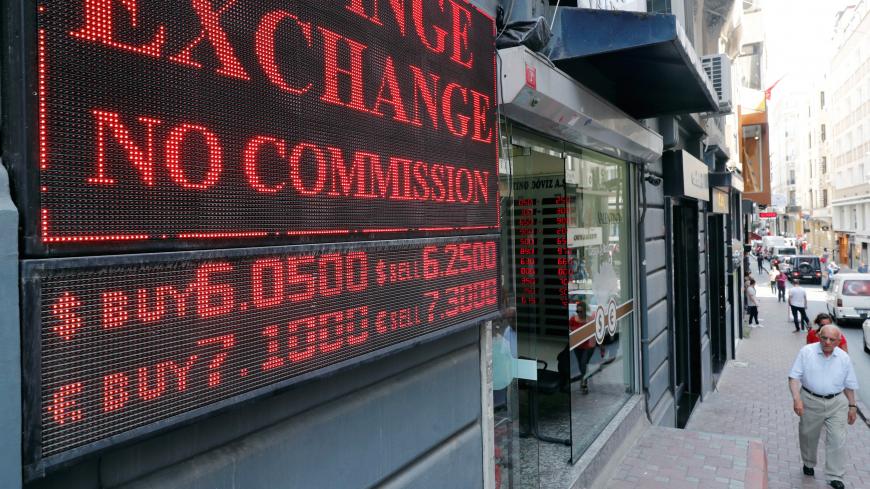 A man walks past a board showing the exchange rates next to a currency exchange office in Istanbul, Turkey Aug. 28, 2018. - REUTERS/Osman Orsal

ANKARA — The annual inflation rate has hit 25%, the Turkish Statistical Institute declared Monday. It was the first time since July 2003 that inflation had climbed so high, causing Turks to recall the turbulence of the 1990s and early 2000s when people bought eggs and cheese with banknotes denominated in millions of lira.

“There has been an improvement in the price of raw materials,” he told A Haber. “In November and December inflation will fall,” he said.

But the son-in-law of President Recep Tayyip Erdogan was quickly contradicted by the economists that other TV channels approached.

“The Total Struggle Against Inflation seems to have been ineffective in October,” professor Erhan Aslanoglu of Istanbul’s Piri Reis University told NTV. He added the campaign might yield results this month, but Turks will have to wait until the second half of 2019 to see a substantial fall in inflation.

Gizem Oztok of Istanbul’s Ozyegin University told CNNTurk that inflation could reach 28% in April and May.

Cem Oyvat, a Turkish economist at Greenwich University’s international business and economics department, told Al-Monitor in an interview that the chief reason for high inflation was the decline in exchange rates. The Turkish lira had lost 40% of its value against the dollar by the time Erdogan allowed the Central Bank to raise interest rates by a whopping 6.25% in September.

Last week, Albayrak cut the taxes on white goods — large household appliances — furniture and cars, and called on companies to offer 10% discounts on goods impacting inflation until the end of the year.

“The government is prioritizing growth over inflation, which is understandable because the country is in a crisis,” Oyvat told Al-Monitor. “Demand is down, and they don’t want to reduce demand further by introducing austerity measures.”

Oyvat is one of the many economists who fault Erdogan for pressing the Central Bank not to raise interest rates when the warning signs were flashing last year. The president holds the unorthodox view that the answer to inflation is low interest rates.

“If last year’s boom had not been supported by low interest rates, then the situation [now] would have been better,” Oyvat said.

The return of high inflation is a major setback for the ruling Justice and Development Party (AKP). The AKP’s electoral success — re-elected in 2007, 2011, 2015 and in June — is largely a product of its having given voters levels of growth and low inflation that they had not enjoyed for decades.

Turkey goes to the polls in March next year in local elections that are already perceived to be a test of the popularity of Erdogan and the AKP. High inflation reduces real wages, and the lower-income groups are the bedrock of the AKP’s constituency.

In research conducted with Alper Yagci of Ozyegin University’s economics department, Oyvat found that an annual decline of 1% in the real incomes of voters reduces the probability of their voting for Erdogan by between 0.7% and 1.0%.

“I would definitely expect Erdogan to lose votes in the next election,” Oyvat said.

By coincidence, Monday saw Turkey’s two largest parties take important steps toward the local elections. The AKP opened its doors for candidates to apply to run in the March polls, saying that applications had to be filed by Nov. 12.

And the opposition People’s Republican Party (CHP) announced it would not forge an alliance with any other party. Analysts had thought the CHP would make a deal with the new Good (Iyi) Party, which ate into its electoral base in the June legislative elections.

The main prize in the elections is Istanbul, a city of 14 million people currently held by the AKP. The favored AKP candidate in the race for Istanbul mayor is Binali Yildirim, formerly prime minister under Erdogan and currently speaker of parliament. Today Yildirim said he did not approve of declaring one’s candidacy until the party executive had decided, but “up to now I have served wherever my party and country needed me.”

Opposition supporters had wanted Muharrem Ince to run for Istanbul mayor. The CHP physics teacher had polled significantly higher than his party in the June presidential elections, drawing crowds of over a million people in Istanbul, Ankara and Izmir. But after a disagreement over nomination procedures, Ince did not apply for the Istanbul ticket.

One piece of good news for Turkey arrived late on Monday afternoon: US Secretary of State Mike Pompeo announced that Washington is granting an exemption to Turkey and seven other countries from the sanctions it has re-imposed on Iran’s energy, banking and shipping industries.

The move means that Turkey may continue to buy oil and natural gas from Iran. The other seven countries enjoying the waiver are China, Greece, India, Italy, Japan, South Korea and Taiwan.