A significant amount of loan money, released as incentives for the Turkish business community, appears to have ended up in high-yield bank deposits and foreign currency, reflecting widespread mistrust in the future of the Turkish economy. 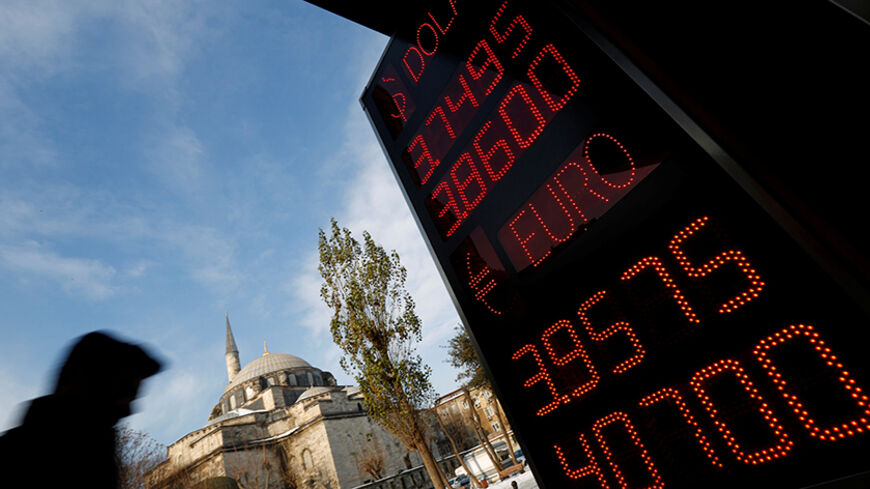 On July 15, 2016, the day of the botched coup attempt in Turkey, the foreign-exchange bank deposits of Turkish citizens and companies totaled $191 billion. The putsch worsened the country’s already troubled economic outlook, stoking concerns of political and economic instability. In the ensuing months, international credit rating agencies cut Turkey to non-investment grade, while global factors contributed to a drastic slump in the Turkish lira, which further compounded the problems. President Recep Tayyip Erdogan described the downturn as an economic coup that sought “to bring Turkey to its knees.” He urged citizens and institutions to convert their foreign exchange savings to Turkish liras.

As of Dec. 30, 2016, Turkey's foreign exchange deposits had declined by about $17 billion to $174 billion. In fact, the dollar and the euro had appreciated so much against the Turkish lira that exchanging them at those rates was quite profitable.

In the past several months, however, the tide seems to have turned. According to central bank figures released May 12, foreign exchange deposits stood at $195 billion, up from $173 billion Jan. 6. In other words, deposits increased by $22 billion over five months, a trend that seems to have picked up ahead of and after the April 16 referendum. From Jan. 6 to Feb. 3, the total increased by $7 billion to $180 billion. On April 14, just before the eve of the referendum, deposits reached $188 billion, and rose further to $194 billion on April 28.

One explanation is the renewed flight from the Turkish lira to hard currency, which many in Turkey see as a means to protect their savings in times of economic distress and uncertainty. Yet, there is another important factor: the abundant issuance of loans that the government encouraged ahead of the referendum in a bid to secure the approval of the critical constitutional changes.

In its campaign ahead of the vote, the ruling Justice and Development Party (AKP) mobilized all budget funds and public resources at its disposal, encouraging the issuance of hundreds of thousands of loans under a newly established credit guarantee fund, among other steps. About 7% of those loans were in the scope of Treasury guarantees. In addition, hundreds of thousands of small enterprises and shopkeepers received “lifeline loans” of 50,000 Turkish liras ($14,000) with zero interest rates and a one-year grace period. Public lender Halkbank issued the loans under the guarantee of another public institution, the Directorate for the Development of Small- and Medium-Scale Industry (KOSGEB).

Deputy Prime Minister Nurettin Canikli said in early May that loans worth 160 billion Turkish liras ($45 billion) had been issued as part of the credit guarantee fund system over a month and a half, while those issued under KOSGEB guarantees totaled 6 billion Turkish liras (about $2 billion). In sum, the government funneled 166 billion Turkish liras into the private sector ahead of and after the referendum until the end of April, with the stated aim of reviving the economy and encouraging investment.

Despite this sizable support, the investment drive is nowhere to be seen.

Bankers, some bureaucrats and opposition lawmakers claim that most of those low-cost loans were misused, and that huge sums went to government cronies. The money, they claim, was spent not on investment but on homes and cars or was deposited to high-yield accounts in other banks.

Erdogan Toprak, a lawmaker for the main opposition Republican People’s Party (CHP), points to the more than $20 billion increase in foreign exchange deposits since the beginning of the year. He claims that loan recipients converted significant amounts into hard currency, taking advantage of the relatively low exchange rates in recent weeks, with a view of making profits in the future. “If they fail to repay those 166 billion Turkish liras [in loans], the debt burden will fall on the credit guarantee fund and the Treasury. So, the whole nation will be paying the bill of loans that the AKP distributed to enrich certain people,” Toprak said in a May 20 statement.

A former Treasury deputy undersecretary, Hakan Ozyildiz, voiced similar concerns, urging an “immediate” and “detailed” investigation into how the loans were spent.

The fact that the foreign exchange deposits increased simultaneously with the loan drive adds credence to the claims.

The Turkish Statistical Institute’s figures for home sales in April point to a new boom on the property market. The number of home sales increased by 10.8% in April, when loan issuance accelerated, which suggests that an important portion of the loan money could have been used for home purchases as well.

Given that Turkey’s inflation is 12% and the central bank’s maximum rate stands at 12.5%, the banks’ eagerness to offer 20% on Turkish lira deposits and 10% on hard currency is the sign of a risky outlook. It suggests that banks have begun to feel financial strains and are competing to lure money by hiking interest rates.

Since the beginning of the year, Turkish lira deposits have increased by 16%, while foreign exchange deposits have grown by 24%, according to the latest central bank figures.

As allegations of loan misuse intensified, the head of the Banking Regulation and Supervision Board, Mehmet Ali Akben, said May 13 that the board would investigate the claims.

Speaking to entrepreneurs and tradesmen on May 24, Erdogan reiterated his opposition to high interest rates, describing them as “an exploitation instrument.” He urged the business community to boost investments and renewed calls for one of his most coveted projects: “an automobile that is 100% locally produced.” His words were met with applause by the same people who are said to have put their loans into high-yield deposits and hard currency — a contradiction that reflects the business community’s mistrust in the future of the Turkish economy.