Foreign Minister Avigdor Liberman's announcement that he will not join the Netanyahu coalition was carefully planned, placing the prime minister between a rock and a hard place, with just two days left to form a government. 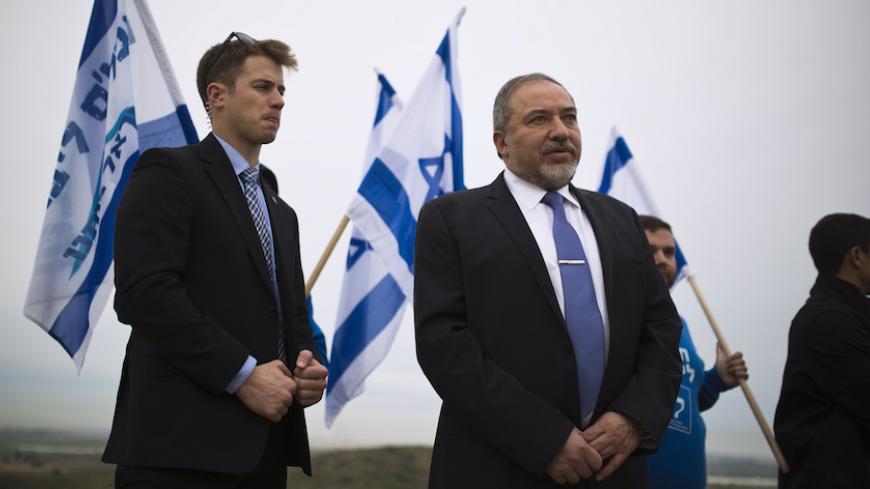 Israel's Foreign Minister and head of Yisrael Beitenu Party Avigdor Liberman stands on a hill overlooking the Gaza Strip, as he campaigns in the southern town of Sderot, Feb. 23, 2015. - REUTERS/Amir Cohen

Israeli Foreign Minister Avigdor Liberman planned this ruse as one would plan a political assassination. On May 1, he told Al-Monitor in a phone conversation that “everything is possible. The chances that I’ll become part of the government are 50-50; I'm truly undecided because [Prime Minister Benjamin] Netanyahu violated his promises and I cannot be partner to a government that will cancel all the achievements we scored in the previous government.”

My guess is that during that conversation, Liberman already knew he was not part of the game. His supreme goal at this very moment is to bring Netanyahu down, and Liberman has the knowledge and the talents to carry this out. “I assume that this government won’t survive to the end of the year,” Liberman said the day after he resigned. In closed talks, he added that panic will cause Netanyahu to make mistakes that will speed up the end to his fourth government. Liberman promises that he will do everything possible to forestall a fifth Netanyahu government. It is a life-or-death political duel between two historic allies who burst into Israeli politics together in the 1996 elections and since then have steadily moved apart, until becoming almost opposites on the spectrum.

On the morning of May 5, after his resounding resignation and proclamation that he would not join the coalition, Liberman told Al-Monitor, “I will not join the government because Netanyahu has no intentions of doing anything and is not capable of carrying out anything. Note the similarities between Netanyahu and [Palestinian] President Mahmoud Abbas, it is fascinating: You see, President Mahmoud Abbas will never fight us, will never sign a peace agreement with us and will never resign. Bibi [Netanyahu] is the same. He will not take any real steps, not in the direction of the Middle East, not in the direction of a regional arrangement and also not an assault on Iran. The only thing he will do is to preserve things as they are, mainly his rulership. I remember the letter that Netanyahu sent to Prime Minister [Yitzhak] Shamir prior to the Ahmed Jibril prisoner exchange deal [in May 1985]. The letter contained all the correct, intelligent arguments and rationales; there's no one like Bibi writing these kinds of letters, he explained exactly why it is forbidden to surrender to terror and all the harmful repercussions of such a move. Afterward he comes and does exactly the same in the [Gilad] Shalit deal. You have to remember what he said after Operation Cast Lead [2008-2009] when he promised to bring down the Hamas regime, and what he actually did in the territory [Gaza] during the Protective Edge campaign [July-August 2014], when he ensured the continuation of the Hamas regime. I’m finished with his way of doing things.”

Liberman has a long list of political debts to settle against Netanyahu, some of which he detailed here. There are other slights, too, which include Netanyahu’s promise to the ultra-Orthodox to revoke the conversion reforms — reforms that are very important to Liberman’s constituents; the decision to again increase the number of ministers in the government; the attempt to force all the coalition partners to sign a clause ensuring Netanyahu’s sole rule of Israel’s media market; and Netanyahu’s intentions of attaching the Zionist Camp to the government immediately after its current leader Isaac Herzog wins his party’s primaries. Liberman knew that he would have been a temporary foreign minister, only until Herzog was ready to join and get the portfolio, so he decided to cut loose now.

But Liberman’s real considerations were not political or principled in nature. What really played center stage in the dramatic telenovela concocted by the outgoing Israeli foreign minister is emotional-base instinct. Liberman was Netanyahu’s all-powerful CEO in the latter’s first term of office (until his angry resignation); Liberman was the coalition partner who handed Netanyahu the rulership in 2009 due to the pre-election alliance. Now Liberman has decided to be the one to put an end to Netanyahu’s rule. That is the reason for the precise timing he chose: two days before the end of the deadline of the extension Netanyahu received from President Reuven Rivlin in which to assemble a government.

If Netanyahu does not inform Rivlin of a coalition by midnight May 6 (Israel time), he will irrevocably forfeit his mandate to assemble a government. To keep his seat, Netanyahu will have to hope and pray that the other Knesset member who would be tasked by Rivlin with assembling a government — who can also be a Likud Knesset member — will not succeed either. That would mean that new elections would be called.

The reason that Liberman waited until now was to prevent Netanyahu from taking a sharp turn to the left and bringing in Herzog. Such a stunt has no chance in succeeding now when only hours remain before the deadline. Herzog announced, an hour or two before Liberman, that there’s no way he’d enter Netanyahu’s government. Now that option is gone. With regard to Yesh Atid head Yair Lapid, there is no chance at all of him joining the coalition. Bibi is blocked on all fronts. Liberman has cooked up a dead end for him. The strange thing is that HaBayit HaYehudi leader Naftali Bennett, who previously had a low profile under Netanyahu, has suddenly become the person holding Netanyahu’s political fate in his hands. If he gives the OK, Netanyahu will establish a narrow government. If he doesn’t, then Netanyahu falls. This is an incredible, startling, uncommon situation that only Israeli politics could produce.

Bennett can currently demand the Foreign Ministry portfolio that is now available. Ostensibly, there’s no reason why Bennett shouldn’t receive it. If this portfolio was given to Liberman with six seats, why shouldn’t it be given to Bennett with eight seats? Bennett, ever since he became a minister under Netanyahu two years ago, was not privileged to catch a glimpse of the prime minister’s residence from the inside or accompany the prime minister on his plane trips. But on the night of May 4 he was suddenly crowned as the omnipotent king for the day, actually for 48 hours. The indignities and humiliations perpetrated by Netanyahu on Bennett over the last two years have now suddenly morphed into a sizzling, desperate courtship on Bibi’s end. On the other hand, tremendous pressures are being inflicted on Bennett not to join Netanyahu’s government and instead announce that he will support any alternative from the Likud to establish a government. As we said, Netanyahu’s fate is in Bennett’s hands. Will he have Liberman’s guts?

So why did Liberman turn against Netanyahu? In closed talks, Liberman accuses Netanyahu of orchestrating the resounding police investigation that opened against his party’s senior officials, just before the elections. Liberman thinks that Attorney General Yehuda Weinstein, who formerly had served as the Netanyahu family lawyer, was “in Bibi’s back pocket” and marched to Bibi’s tune. Liberman says that the investigation was political and its entire purpose was to thwart his plan to be Israel’s next prime minister — a plan he devised together with Moshe Kahlon and with the knowledge of Lapid.

Moreover, Liberman was frequently humiliated by Netanyahu during the Protective Edge campaign. Netanyahu and his Defense Minister Moshe (Bogie) Ya’alon hurled numerous accusations at Liberman during the campaign: of not attending Cabinet meetings regularly, not taking a real interest in the military campaign and exhibiting shallowness while disseminating belligerent, populistic statements for political purposes.

Now that Liberman managed to survive the elections somehow (he views the six seats he raked in as a real achievement, in light of the slippery slope he faced), he decided to take revenge. What we saw May 4 is only the first stage of Liberman’s retaliation against his former political patron and eternal boss, Netanyahu. No one can now guess what will happen in future stages.