“A Parallel Time,” at Al-Midan Theater in Haifa, has sparked an outcry amid allegations that the play glorifies an alleged terrorist. 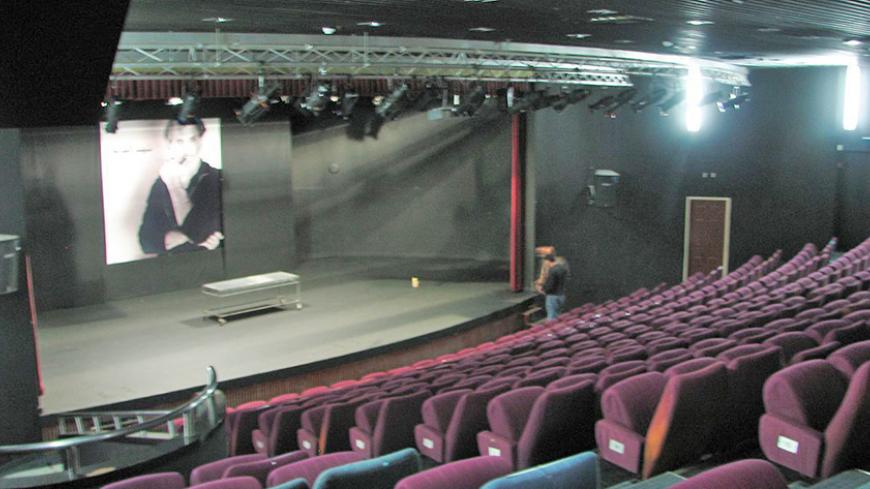 A view inside Al-Midan Theater in Haifa is seen in this photo, April 6, 2011. - Hanay/WikiCommons

Adnan Tarabash, the manager of Al-Midan Theater in Haifa, remains unable to understand what sparked the public uproar over “A Parallel Time,” a play by Bashar Murkus that he says prompted the city council to freeze funding for the theater. One city council member, Shai Blumenthal from HaBayit HaYehudi, submitted a point of order, arguing that the play was based on a story written by Walid Daka, convicted of being a member of a terrorist cell that 21 years ago kidnapped and murdered Moshe Tamam, an Israeli soldier.

“You take a terrorist, a murderer, you give him a platform and try to turn him into something positive,” Blumenthal said to council members. Yet, in an interview with Al-Monitor, the manager of Al-Midan said that the people who have raised a hue and cry over the play had never seen it and don’t know what it is about.

“We are very surprised by the bluster against the play, which we originally staged 14 months ago and is now playing for the 26th time,” Tarabash said. “The play is a far cry from the cliches about acts of heroism, or lack thereof, by security prisoners in Israeli prisons. We didn’t even go into those things. We only explored the question of how people go about their daily life in prison. We’ve already been asked to stage the play in France and England. I really don’t understand who made up the allegation that we praise terrorists or political prisoners.”

The play was written and directed by Murkus, a mere 22-year-old, who graduated from the department of theater at Haifa University. He approached the theater with a proposal to hold writing workshops focusing on writing plays dealing with the security prisoners. From that, a play emerged revolving around the life of six prisoners and a jailer in an Israeli prison. One of the inmates, a musician, is granted permission by the authorities to marry. At that point, the musician prisoner’s cellmates secretly plan a wedding party for him. They even plan to build an instrument, an oud, as a gift. For the most part, the play deals with building the oud, the problems that ensue and the maneuvering required to smuggle the strings and other raw materials into the prison.

“It doesn’t focus on Walid Daka at all,” Tarabash said. “Playwright Bashar Murkus had been working on that project for five years. He really did his research and submitted to the theater a proposal to develop the text together with the theater’s ensemble of actors. The playwright culled stories from many discharged prisoners, mainly about their daily life and their coping mechanisms in prison. One of the prisoners whose stories Tarabash heard was Walid Daka. The play is not about him. But suddenly everything has turned political — security prisoners, terrorists, murderers. What we have here is a theater piece. Come and watch it. No one has even seen the play.”

Indeed, in a May 6 interview with the Israeli daily Haaretz, Blumenthal admitted that he hadn’t seen the play. He had only read the synopsis, sparing himself the need to attend it from start to finish.

In contrast to the theater manager, Murkus told Al-Monitor that he is not surprised by the public uproar and the desire to silence the Arab theater in the city. “Given the situation in the country, it isn’t surprising. But it also says a lot about the place where we are at,” he said. “It gets to the point where the municipality and the Ministry of Culture are trying to muzzle the theater. They say ‘You can’t ask questions, you can’t explore.’ The whole play started with exhaustive research I did with the play’s cast. We came across a few interesting stories, one of which was Walid Daka’s. We delved into his story and decided to use it to develop the play.”

I asked Murkus whether the core plot was based on Daka’s story, his feelings and sentiments. “That too,” he replied. “But it was also based on in-depth research of the subject. It was based on material we collected about his family and his wife and also material about other prisoners. Those who find the play objectionable don’t know how he is portrayed, because the play isn’t about his biography. But they think that because of their pain, which I understand, they have the right to tell me and tell the theater that we mustn’t broach the topic of security prisoners in general. Maybe it’s because Daka, despite his actions, is an interesting person. The very fact that he is a writer that did very well in prison and is thinking of the future frightens those who don’t want to hear about it.”

Meanwhile, the theater's managers and actors are worried that because of this play, Al-Midan Theater, which has built a devout audience of spectators and followers, both Jews and Arab, will have to close its doors. “Yesterday it was decided to freeze the financial support of the Haifa municipality, which makes up half of the theater’s budget,” Tarabash said.

“This morning we got a call from the city tax department telling us they would put a lien on our [bank] account because we haven’t paid city taxes. But according to our agreement with the municipality, it should deduct the city taxes from the budget it gives us, which is 1.2 million shekels [about $300,000]. Now we are strapped for money. I don’t know what to do.”

Al-Monitor asked Tarabash if he understood why the storm erupted at this time. “This is the anti-democratic atmosphere in Israel in which we’re living, and it doesn’t have to do only with Arabs,” he said. “Look at what they did to the Ethiopian community. There is a racist atmosphere by fulminatory bodies that progressively display the hallmarks of fascism. I’m worried about our life here in this country. Some of the bereaved families associated with the Almagor movement [an Israeli association of terror victims' families] have approached, so I’ve heard, the Ministry of Culture. But I can tell you that at the same time, many other bereaved families watched the play and loved it very much. Now we want to turn to those bereaved families that watched the play, those that really watched it, and hear what they have to say — if it really hurt their feelings.”

When contacted by the author, the Haifa municipality responded as follows:

The funding has been approved by the city council, as it has been for many years.

The budget will be transferred as soon as the committee appointed by the mayor completes its inquiry into the matter.

​We believe that the problem will be resolved in a matter of days.