How will Turkey explain $4.3 billion in unidentified foreign currency?

Is it a coincidence that an unexpected gush of foreign funds from unidentified sources occurs in election periods? 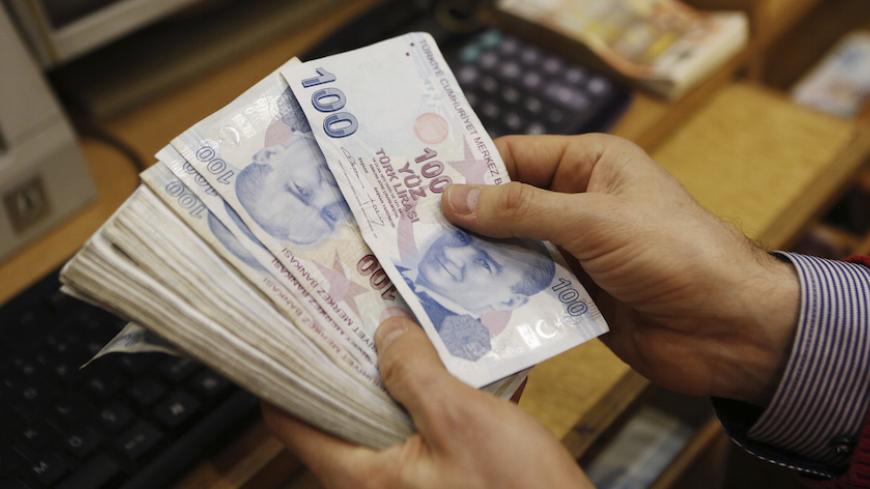 A foreign currency influx that has reached $40 billion since the Justice and Development Party (AKP) came to power in 2002 tends to reach record levels prior to the elections. This inflow, which the Central Bank has not explained, is now $4.3 billion in the lead-up to the June 7 elections, prompting questions as to whether the AKP is getting election support from abroad.

This is why the surge of the transfer of funds from unidentified sources just before elections adds credence to claims that this is money to give election support to the AKP.

In 2011, before the general elections, the amount in the net errors-omissions account had reached an annual total of $9.4 billion, the highest until then.

In 2014, when local elections were held March 30 and presidential elections Aug. 10, $6.4 billion from unidentified sources arrived in six months, bringing the total such funds during AKP rule to $36 billion as of 2014. With $4.3 billion more in February 2015, the total is now above $40 billion.

Two economics experts from the opposition — Faik Oztrak, deputy chairman of the Republican People's Party and Ahmet Kenan Tanrikulu, deputy chairman of the Nationalist Action Party, have called on the Central Bank to lift the curtain from this entry of unreported funds. Tanrikulu said these funds always surge in election periods. He added, "This much coincidence is a bit too much."

This unprecedented amount of foreign currency from unknown sources was transferred from abroad in February when the struggle peaked between President Recep Tayyip Erdogan and the Central Bank on lowering interest rates.

The arrival of such high amounts of undeclared dollars at a time when the Turkish currency was rapidly losing value indicates that those who are transferring these funds are making substantial amounts of "unreported profits." Why be surprised, then, if some people are asking whether the president of the republic instigated the interest rate fight with the Central Bank for the benefit of the unknown proprietors of these unknown funds.

There is another question that needs an answer. In February, when $4.3 billion entered the country, the Central Bank’s foreign currency reserves were reduced by $1.1 billion. This signified that this influx of dollars from unidentified origins did not go to the Central Bank, but to some "unspecified destinations."

As the foreign currency inputs from unidentified sources peaked, there was sharp decline in exports, except of gold. This brings to mind the unrecorded trade of oil and natural gas where Iran was reimbursed with Turkish gold for several years to bypass the international embargo on that country.

This payment with gold became known in the course of the Dec. 17-25, 2013, bribery and corruption investigations that implicated four former ministers and their sons. While the government was desperately trying to close the file by reassigning the police, judges and prosecutors involved, the Hassan Rouhani regime that took over in Iran reactivated the file and accused Turkey of causing Iran a $14 billion loss.

After the heavily publicized corruption investigations, the gold trade and exports slowed down and disappeared from the news. But suddenly, in January and February of this year, in parallel with a surge in foreign currency from unknown sources, gold exports boomed by 117.9% and reached $3.5 billion in two months.

But these rapid increases in the net errors-omissions account before the June 7 elections have not affected the foreign currency and monetary markets at all. Does this mean that these funds are being pooled somewhere else?

Saudi Arabia, Qatar and capital from the Gulf support Erdogan and AKP rule. What is drawing attention in Turkey is that despite reports that this Arab support is behind the accumulation of funds in net errors-omissions, the Central Bank, Deputy Prime Minister for Economy Ali Babacan, Prime Minister Ahmet Davutoglu and Erdogan all remain mum; they don’t react in the slightest, or deny these charges.

Of course, it is not rational to give credence to explanations that this money is coming to Turkey to be invested at a time of political and economic uncertainty when political and tensions risks are high and economic indicators are hitting bottom.

As Citibank is leaving Turkey by selling its shares in Akbank, as the Royal Bank of Scotland is deciding whether to depart, as HSBC lets it be known that it is getting ready to leave and credit rating agencies such as Fitch, Moody’s and Standard & Poor's warn of high risks and fragility, one wonders who the brave souls who poured $4.3 billion into this country are.