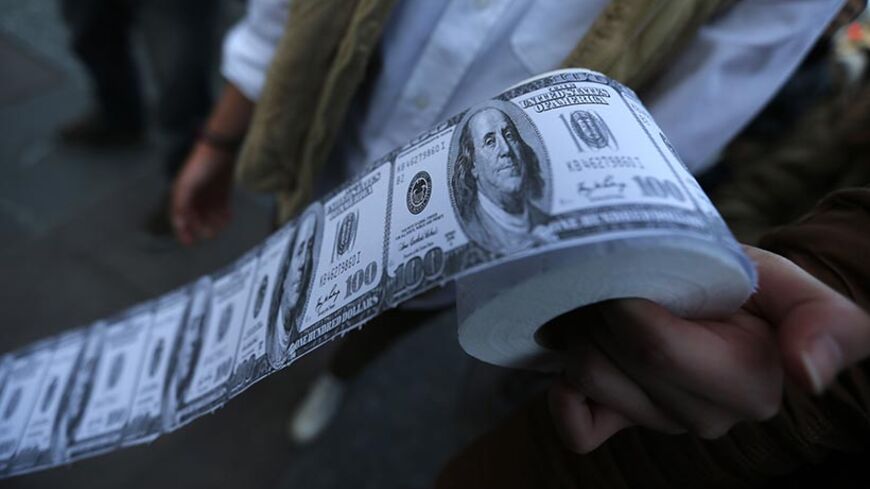 The pace of foreign currency coming to Turkey from unknown sources for the past 12 years keeps on climbing. Nobody says where the money is coming from. In the Central Bank’s “balance of payments” table these unregistered funds are shown under the item “net error and deficit.”

But all economists know that it is impossible to conceal such high amounts. Anyhow, they have learned to look under the “net error and deficit” column to follow the movement of mystery funds.

This flow of funds from unknown sources is closely linked to political changes in Turkey in the last 12 years and to regional developments.

Mahfi Egilmez, a former undersecretary of the Treasury, has prepared a detailed table which clearly shows that following the Justice and Development Party's (AKP) victory in the first elections it contested in November 2002 there has been a boom in mystery funds coming to Turkey. In 2002, $758 million exited Turkey but in 2003 $4.489 billion entered. The pouring in of mystery funds gained momentum in 2007, when the AKP also took over the presidency of the country, thus giving rise to confidence that AKP would be governing for a long time to come. While the incoming mystery funds were $517 million in 2007, in 2008 that increased sixfold to $3 billion. The year 2011 was a record-breaker, with $9.4 billion arriving in mystery funds.

In the 11 years before the AKP, the unrecorded funds were flowing in the other direction. Between 1992 and 2002, $3.5 billion from unknown sources left Turkey. But a total reversal followed in the next 11 years under AKP. Between 2003 and 2013, a total of $29.3 billion entered Turkey. When you add the $6.4 billion from unknown sources in the first half of 2014, the total from mystery sources is $36 billion. This amount is expected to rise to more than $40 billion by the end of the year.

Is it possible to classify such a huge amount as an “accounting error” and to cover it up as “net error and deficit”? Former Treasury undersecretaries Faik Oztrak and Mahfi Egilmez are calling on the Central Bank to disclose the source of this “net error and deficit” item, otherwise warning that these mystery funds will generate dangerous speculation about many ministers and bureaucrats.

With an anticipated $15 billion coming in by the end of 2014, the record of $9.4 billion for 2011 will be broken. Monthly receipts this year are exceeding annual receipts of earlier years.

So where is this money coming from? To discover the source of the mystery funds, Oztrak submitted queries to the parliament for Ali Babacan, the minister responsible for economic coordination, to respond. But to date, he hasn’t heard either from Babacan or the Central Bank.

Oztrak said: “If $13.5 billion of mystery funds from unknown sources come to a country in one year [July 2013-June 2014] but no questions are asked why this money is coming and from what sources, then the seriousness and competence of our institutions will be subject to questioning.” Oztrak said the state has to give a satisfactory explanation of this phenomenon and warned that keeping silent will only fuel speculations about the source of these funds.

Oztrak, however, provided some information on possible origin of these funds: “At one point Iran was cited as the source. Now the addresses are Syria and Gulf countries. The state must investigate this seriously and should not allow speculation."

Former undersecretary Mahfi Egilmez also alludes to the same sources: "There are allegations that unregistered mystery funds are coming to Turkey from various countries, primarily from the Middle East. None of these claims have been verified, however.”

Political scientist Mustafa Sahin, known to be close to the AKP, looks at the question from a different perspective. He said the AKP has discovered the importance of these unregistered funds and said: “The secret of how Turkey avoided the 2008 global economic crisis is in these mystery funds. The West suspects that Middle East capital is entering Turkey without records, without being registered. Qatar and other Muslim countries have money in Turkey. These unrecorded funds came to Turkey because of their confidence in Erdogan and the Muslim features of the AKP and the signs of Turkey restoring its historic missions.”

What happened to the funds from unknown sources? Were they taxed?

Going back to the question of the origin of these mystery funds, Naki Bakir, economics writer of for the Gazeteciler Online website, makes this assessment: “The movements in the ‘net error and deficit’ account illustrate an ever-increasing inflow of money from unknown sources. They coincide with the data and documents strewn about following the Dec. 17 corruption operations. Clearly, considerable funds from unknown sources, primarily from Middle East countries, are coming into Turkey, thus making Turkey an important junction in black money traffic.”

To conclude, the Central Bank has two options: Either it will give a detailed explanation to prevent speculation or it will continue to conceal the facts. But the numbers are growing. How much longer can they hide $36 billion?