Money inflows of unknown origin headed for record in Turkey

As Turkey’s current account deficit continues to widen in the coming months, foreign currency inflows of unknown origin might end up covering more than 70% of the gap. 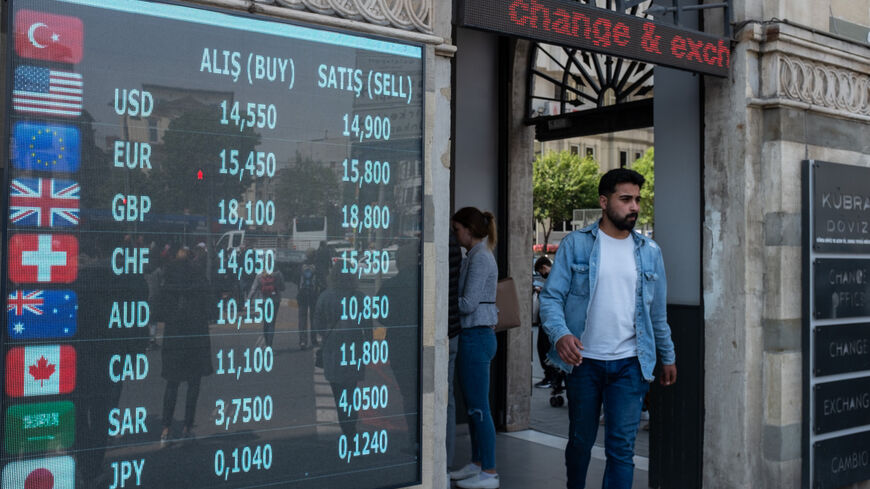 Inflows of $17.5 billion from unknown sources covered more than half of Turkey’s current account deficit in the first half of the year — and the rate could reach a record level in the coming months, underscoring how acute the country’s need for foreign investments has become.

Turkey’s current account gap widened to $32.4 billion in the first half of the year, reflecting its worsening trade imbalance due to a global rise in energy and commodity prices on top of the depreciation of the Turkish lira. Official data indicate that inflows of foreign funds, including direct and portfolio investments, were enough to finance only 8% of the gap, while 38% was met through central bank reserves and a whopping 54% by inflows of unknown origin.

A significant part of those inflows — recorded in the “net errors and omissions” category in the balance of payments — stems from legitimate foreign currency funds that the private sector holds abroad for various reasons and brings home out of necessity or to take advantage of some favorable condition or because of compelling government measures. This category reflects also the illicit movements of money earned from criminal activities, but naturally, their amount is hard to tell.

Judging by leading foreign trade data, Turkey’s current account turned up a deficit of some $4 billion in July, which would bring the cumulative deficit to at least $36.5 billion in the first seven months of the year. It is likely to reach $40 billion to $45 billion by the end of 2022, and inflows of unknown origin appear headed for a record rate in financing the gap.

Foreign currency shortfalls or current account deficits have been a chronic problem of Turkey’s economy, which relies on foreign funds to grow. In the years after a far-reaching IMF-sponsored overhaul following a grave economic crisis in 2001, the Turkish economy grew fast and posted big current account deficits — but ample inflows of foreign funds easily covered the gaps. Emboldened by the abundance of foreign capital, the Justice and Development Party (AKP), which came to power in 2002, promoted growth at the expense of growing current account deficits. In the AKP’s first decade in power, annual current account gaps stood at no less than 5% of gross domestic product (GDP). The largest one, recorded in 2011, was $74.4 billion — nearly 9% of the GDP. Yet foreign monies pouring into Turkey in the form of direct and portfolio investments, bank deposits and loans were able to cover 80% of the deficit that year. Inflows of unknown origin met only 16% of the gap.

That tide, however, began to turn after the US Federal Reserve began to hike rates in 2013. Foreign investors grew more cautious about putting money in Turkey also because the country’s own economic indicators began to deteriorate. That’s how the era of easily afforded current account deficits came to an end.

President Recep Tayyip Erdogan, meanwhile, was bent on promoting growth to keep up his popular support, but that growth was driven heavily by construction and focused on the domestic market, failing to boost the foreign currency revenues of Turkey’s import-reliant economy. This trend of high foreign currency spending and low foreign currency earnings kept widening the current account deficit, while the financing of the gap had to rely increasingly on central bank reserves and foreign currency inflows of unknown origin. Global headwinds following Russia’s invasion of Ukraine in February have only aggravated Turkey’s woes.

The role of the inflows of unknown origin has grown since Erdogan assumed sweeping executive powers in 2018 — a period widely seen as a one-man rule during which Erdogan’s economic management has further discouraged foreign investors. Such inflows peaked to $22.7 billion in 2018 when a crisis with Washington over Turkey’s detention of an American pastor sent the lira tumbling.

In the four and a half years from 2018 through the first half of 2022, inflows of unknown origin became the main means of financing a current account deficit totaling some $98 billion, official data show. Such inflows covered 45% of the gap, while the share of coverage of incoming foreign funds dropped to 23.5%. The remaining shortfall was met at the expense of burning through $31.5 billion in central bank reserves. Consequently, the lira lost 68% of its value in the same period. The price of the dollar averaged over 15 liras in the first half of 2022, up from 4.8 liras in 2018.

With the current account deficit expected to widen beyond $40 billion by the end of the year, inflows in the net errors and omissions category are likely to end up covering more than 70% of the gap and setting a new record.

The central bank notes that net errors and omissions stem mostly from export revenues kept abroad and time lags in accounting records and the dissemination of relevant statistics, which, indeed, is the case in the balance of payments of any country.

Turkish companies that keep foreign currency holdings abroad for various reasons would sometimes bring those monies in because of operational needs and sometimes because of incentives or pressure by the government.

In recent years, Ankara has persistently sought the transfer of such assets to the country. The central bank has introduced measures aiming to force companies — primarily exporters — to bring their foreign currency holdings home. There have also been verbal admonitions to that effect, sometimes in a menacing tone.

Speaking to the Istanbul Industry Chamber in late July, central bank governor Sahap Kavcioglu said, “Companies are said to have $500 billion in nonregistered money abroad. Even if 90% of this sum is false and only 10% true, it makes $50 billion. They should convert that money.” His claim may have been met with derision but is important in terms of reading Ankara’s intentions.

The widening current account deficit was among the reasons that credit rating agency Moody’s cited on Aug. 12 as it lowered Turkey’s sovereign credit rating by one notch to B3 or deeper into junk territory. Standard & Poor’s and Fitch are likely to follow suit.