An extraordinary uptick in capital flows of unknown origin to Turkey has left many wondering whether Russian money could be involved. 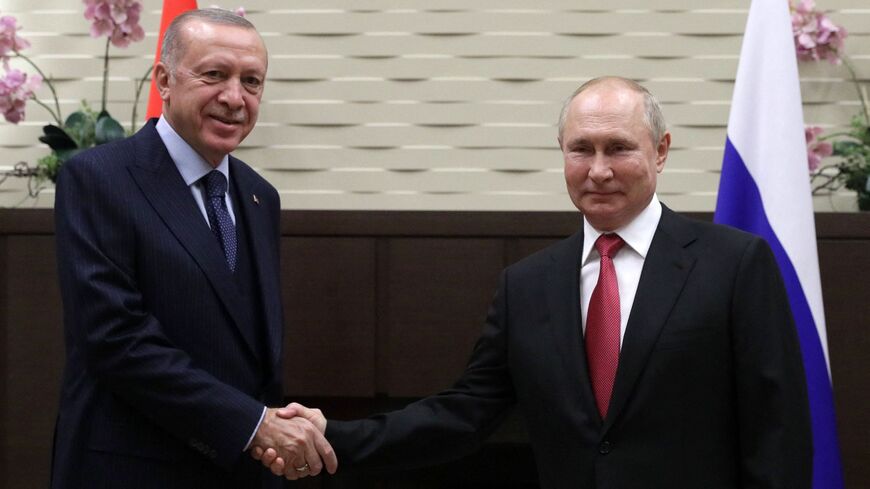 Turkey’s energy import bill — standing at $83.5 billion over 12 months in July — is a major factor behind its gaping current account deficit. And with Russia being Turkey’s main energy supplier, President Recep Tayyip Erdogan seems to have pinned hope on his Russian counterpart Vladimir Putin to help ease Turkey’s foreign exchange shortfall, wary that the Turkish lira might nosedive anew ahead of elections next year.

Erdogan’s political opponents are suspicious that his government could seal opaque deals with Moscow to secure fresh financial means or defer the bills of energy imports to after the elections, due in June 2023 at the latest.

Turkey’s current account registered a $4 billion deficit in July, bringing the cumulative gap to $36.6 billion in the first seven months of the year, according to central bank data released on Sept. 12. The country’s foreign trade deficit stood at $10.7 billion in July, meaning that tourism revenues and other foreign currency inflows failed to cover the gap, resulting in the $4 billion current account deficit. A foreign trade deficit of $11.2 billion last month portends a similar current account gap in August, which would bring the eight-month cumulative to more than $40 billion. In light of this trend, the government’s year-end forecast of $47.5 billion appears rather optimistic.

Adding further pressure on the battered lira is a $182.5 billion external debt maturing over the next 12 months. The weakening of the lira has been the main inflamer of inflation in Turkey, which topped 80% in August and must be giving Erdogan sleepless nights as the grievances of the electorate grow.

The current account gap stems mainly from Turkey’s growing import bill, which rose 43% to $206 billion in the first seven months from the same period last year. Energy alone accounted for 23% of the imports. With a share of 15.5%, Russia is Turkey’s top trade partner in terms of imports, chief among them energy supplies. Hence, any Russian gesture on Turkey’s energy bill would be important for Ankara as it scrambles to prop up the lira and curb rising foreign currency prices.

Erdogan has sought such favors from Putin since Russia’s invasion of Ukraine, drawing on his heightened diplomatic profile as a mediator in the conflict. As Bloomberg reported in July, Turkish officials have floated a mechanism to allow Turkey to pay in liras for its energy imports from Russia. But in his meeting with Erdogan in early August, Putin agreed only to partial Turkish payments in rubles for Russian gas. Since then, the talk has shifted to the prospect of Turkey borrowing rubles from Russia to make the payments.

On Sept. 9, Erdogan said that borrowing from “friendly countries” was helping to replenish the central bank’s depleted foreign reserves. “Many friendly countries are currently extending the necessary support. Our borrowing from them makes our central bank stronger. Hopefully, we’ll succeed in this and overcome the foreign currency hardship,” he said.

Russia’s publicly known support began in late July as its state-owned nuclear energy company Rosatom started to wire dollars to its subsidiary in Turkey, which is building the country’s first nuclear power plant in Akkuyu, near the Mediterranean coast. After an initial transfer of about $5 billion, the sum was expected to reach $15 billion down the road.

Gazprom might also step in. According to Bloomberg analysts, Turkey will likely receive a credit line from Gazprombank in rubles and use it to pay for the gas. The Russian government would provide the bank with an explicit or implicit guarantee for the loan, meaning that Turkey’s borrowing cost would be lower than the current market rates. The scheme would ease Turkey’s demand for hard currencies such as the dollar, while lowering the risk of frozen assets for Russia, the analysts say.

According to some economists, however, such a scheme could hardly resolve Turkey’s hard currency shortfall, even though it might provide some relief.

Meanwhile, some pundits have come to question whether Russian money could be involved in the extraordinary increase in capital flows of unknown origin to Turkey. Such inflows — recorded under “net errors and omissions” in the balance of payments — totaled more than $24 billion in the first seven months of the year, and financed 66% of the current account deficit in July.

Home purchases by Russians have spiked in Turkey in recent months. Russian nationals bought a fifth of the nearly 25,000 homes sold to foreigners from April to July. A number of arrangements encouraging the flow of Russian tourists to Turkey are also seen as part of Moscow’s support for Ankara.

The give-and-take between Erdogan and Putin is irritating Washington over the prospect of sanctions evasion, with US officials occasionally shaking a finger at Ankara. Turkish opposition parties, meanwhile, are wary of any gestures by Putin to Erdogan’s government in the lead-up to the elections. While some contend that Russian support could barely boost Erdogan’s economic credentials, others remain apprehensive of what might be in store.