Why does Netanyahu really want to sabotage the Iran deal?

Israeli Prime Minister Benjamin Netanyahu's attempt to introduce non-nuclear-related demands in the negotiations with Iran is being dismissed as lacking credibility. 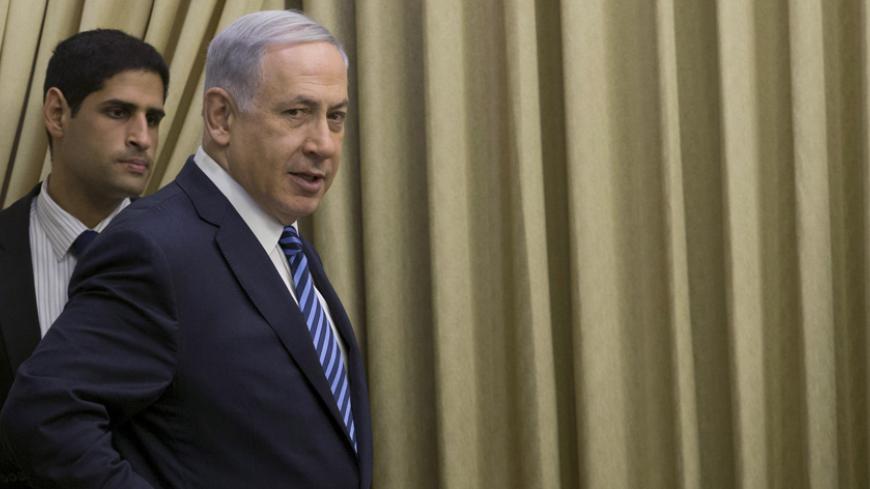 Let us assume for a moment that a major terrorist attack with multiple casualties occurs in downtown New York this week and that it can be traced back to Tehran. Would President Barack Obama instruct Secretary of State John Kerry to maintain a “business as usual” approach toward Iran in the negotiations to freeze its nuclear program in return for lifting sanctions? Let us assume that a Mexican anti-American terrorist organization with thousands of missiles supplied and funded by Iran aimed its missiles at major cities across the southern United States. Would the president need Congress' approval to demand that continued negotiations depend on the immediate removal of those missiles from his country’s border? Now replace New York with Aden, Yemen, and Mexico with Lebanon. Instead of the southern United States, substitute northern Israel. Now, these hypothetical questions become very real indeed. From a moral perspective, and from a strategic one as well, is there any room to lift a single symbolic sanction on Iran as long as it attacks one country after another in the Middle East and supports regimes and terrorist organizations that massacre innocent civilians?

In an article published April 8, Hanin Ghaddar, editor of the Lebanese website NOW, wrote, “The threat was never Iran’s nuclear program; it has been and still is Iran’s interventionism. Iran’s Revolutionary Guard and their proxy militants in Lebanon, Syria, Iraq and Yemen, encompass the real source of danger.” According to this Lebanese journalist, giving up on the goal of attaining a nuclear bomb is a very small price to pay for the lifting of sanctions, because it will enable Iran to bolster its proxies in Yemen, Iraq, Syria and Lebanon. In fact, Ghaddar warns that the lifting of sanctions could lead to nothing less than a full-blown regional war, so she calls on the United States and its allies to immediately formulate a regional strategy to include ways to restrain Iran and its allies. According to her, the need to prevent desperate Sunnis from finding solace in the arms of radical groups such as al-Qaeda and the Islamic State and to defend peaceful Shiite civilians from the ayatollahs’ proxies takes precedence over any nuclear agreement.

Professor Matti Steinberg of Jerusalem is a Middle East scholar who agrees that the major threat posed by Iran lies in how it is taking advantage of the disintegration of the Arab order to embark on regional adventurism. Nevertheless, in a conversation with Al-Monitor, Steinberg shared his belief that under no circumstances should Iran be presented with a demand that it put a stop to its involvement in other countries of the region as a precondition for a nuclear agreement. He asserted, “On the contrary, the time left until the signing of the agreement and immediately afterward should be used to rein in Iran’s border infringements.” He emphasizes that the strategic objective should be the dismantling of the Revolutionary Guard units responsible for foreign interventions. In other words, Iran should be forced to transition from a “revolution” into a “state.”

Israeli Prime Minister Benjamin Netanyahu is also asking that the conventional threat that Iran poses to Israel be included in the agenda of the six powers negotiating with Tehran. He is increasing his efforts to cause what he considers a bad deal to fail by demanding that Iran recognize Israel’s right to exist. Actually, he is not introducing anything truly earth shattering with this demand. Iran’s violent rhetoric against Israel has been the primary reason behind every Israeli government's struggle to prevent a nuclear Iran. Furthermore, this rhetoric is the reason why Israel has refused for decades to sign the Nuclear Non-Proliferation Treaty in regard to the dozens of nuclear weapons that Israel is hiding in Dimona according to the foreign press.

The issues involving Netanyahu's position lie in a combination of the demand’s problematic timing, the problematic identity of the person making the demand, and the problematic relationship that the prime minister has with the person from whom he is making the demand. As Obama noted, making the nuclear agreement conditional on Iran’s recognition of Israel and its right to exist, especially at this particular juncture, would actually make the emerging agreement with Iran conditional on a fundamental and comprehensive change within the Iranian regime. Upon reading between the lines here, it is easy to find the president’s implicit acceptance that Iran’s anti-Israel policies, expressed through its support of terrorist organizations, is a pillar of the regime in Tehran.

The leadership in Tehran has not to date exhibited self-destructive tendencies. On the other hand, Obama has turned this agreement into the highlight of his foreign policy; hence he is rejecting any effort to shackle negotiators’ hands and feet. Professor Ephraim Kam, an Iran expert, wrote an article for the Institute for National Security Studies website claiming that Iran’s refusal to discuss any issues not directly related to its nuclear program, such as its ballistic missiles, is based on the assumption that the Obama administration will not blow up the talks over it.

When Netanyahu makes the demand that the United States take advantage of Iran’s eagerness to have the sanctions against it lifted for some non-nuclear-related issue, there is reason to suspect that this is just another attempt to harm a Democratic president and help the Republicans win the White House. Furthermore, the demand that the Iranians recognize Israel’s right to exist as a condition for removing sanctions is reminiscent of Netanyahu’s rigid demand that the Palestinians recognize Israel as the nation-state of the Jewish people as a condition for his agreement to establish a Palestinian state. The number of Israeli politicians who believe that this demand was not intended to sabotage a two-state solution, after Netanyahu himself reneged on it, can be counted on one hand. That same number of fingers could be used to count the number of American politicians who believe that the demand that Iran recognize Israel’s right to exist was not intended, first and foremost, to sabotage the nuclear agreement.