One Republican senator said the United States would need to ratify the Iran nuclear agreement as a treaty to be able to provide such an assurance. 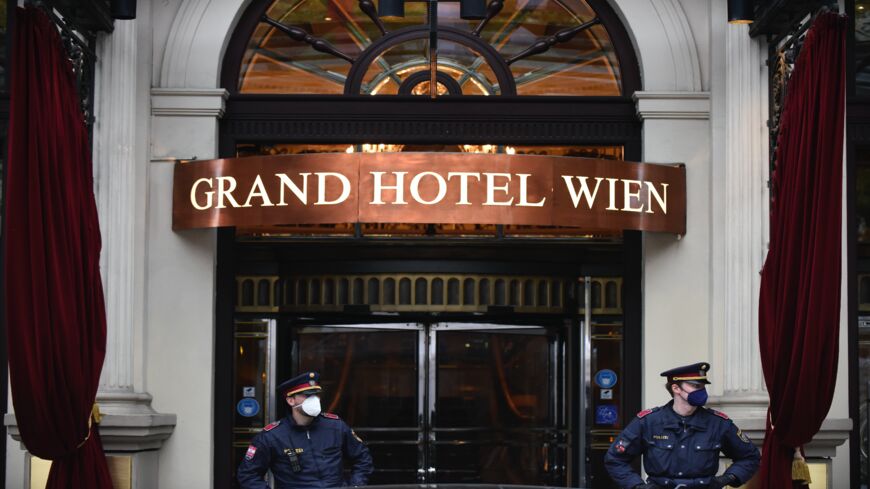 Police guard the Grand Hotel on the day the JCPOA Iran nuclear talks are to resume on May 25, 2021, in Vienna, Austria. - Thomas Kronsteiner/Getty Images

Iran wants a guarantee from the United States that it will not leave the Iran nuclear agreement again.

“The US must give a guarantee,” Iranian Foreign Ministry spokesperson Saeed Khatibzadeh told reporters on Monday, according to the semi-official Tasnim News Agency.

The United States and Iran are currently participating in indirect talks in Vienna on a possible US return to the Iran nuclear deal, formally known as the Joint Comprehensive Plan of Action (JCPOA). The 2015 agreement required Iran to scale back its nuclear program in exchange for international sanctions relief. In 2018, then-US President Donald Trump removed the US from the deal, alleging Iran sought to build a nuclear weapon.

Current President Joe Biden is now open to returning to the JCPOA but wants Iran to return to compliance. Iran is currently enriching uranium, which is required to develop nuclear energy, well above the deal’s stipulations.

Trump’s withdrawal from the nuclear accord is still a sore point for Tehran.

“The US has once shown during Trump’s tenure that it can ignore the interests of nations in a defiant manner,” said Khatibzadeh.

The minister’s comments elicited a strong reaction from one influential US member of Congress. Republican Sen. Ted Cruz of Texas said the nuclear deal would need to be ratified by the Senate as a treaty if Iran wants such a guarantee.

“Not sure how many times Republicans need to say and do this, but the only way the Ayatollah can get his assurances is if the catastrophic nuclear deal he's working on with Team Biden is passed by the Senate as a treaty,” said Cruz in a tweet Sunday, referencing Iran’s Supreme Leader Ayatollah Ali Khamenei.

A treaty would require significant input from the US Senate to pass, per the US Constitution.

A US return to the JCPOA faces several additional political roadblocks. Iranian President-elect Ebrahim Raisi said Monday that there will be no negotiations with the United States on Iran’s missiles program nor its support for regional military allies.

Some US senators have been advocating for a more comprehensive Iran nuclear deal that would also curb Iran’s ballistic missile program and proxy groups such as Hezbollah in Lebanon and the Houthi rebels in Yemen. Arab Gulf states have similar demands.

Other Republicans in Congress want to use the 2015 Iran Nuclear Agreement Review Act to review any agreement the Biden administration makes with Iran. Some observers contend the law would not apply to a return to the JCPOA, on the other hand.