Israel understands that Hamas is in Gaza to stay and is now searching for balance between easing the blockade for Gaza residents and limiting Hamas' military activity. 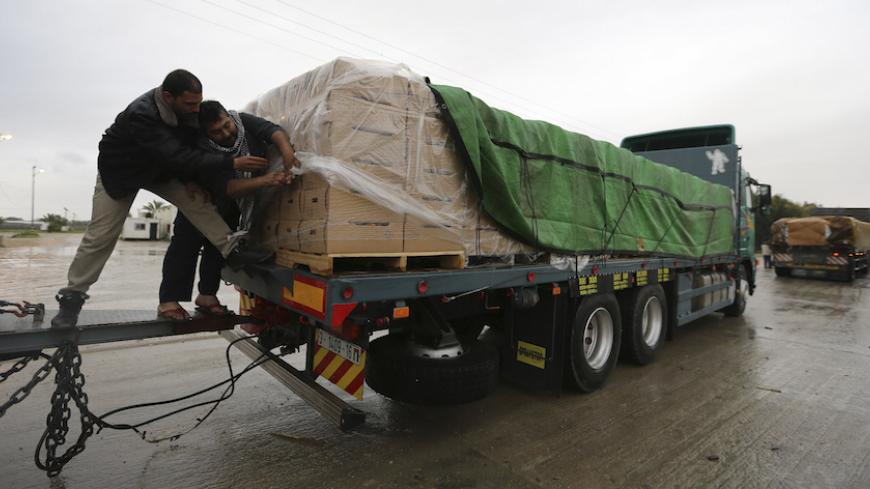 Palestinians cover cartons containing vegetables before exporting them to Israel at the Kerem Shalom crossing in Rafah in the southern Gaza Strip, March 12, 2015. - REUTERS/Ibraheem Abu Mustafa

Slowly, quietly and under the radar, Israel recently completed a full U-turn regarding everything connected to its relations with Hamas. The same Prime Minister Benjamin Netanyahu who declared the day after the Cast Lead operation ended that he would overthrow the Hamas regime in Gaza has in recent years become the bulwark of that exact same regime. Netanyahu and Defense Minister Moshe Ya’alon keep their new policy under wraps for internal domestic political considerations, but as for now, the blockade on Gaza is almost nonexistent and Israel maintains ongoing if indirect contact with Hamas. Israel has no intention of operating to change this regime. On the contrary: Israel prays for governmental stability in the Gaza Strip. According to several reports, Israel even conducts indirect negotiations under Qatari mediation for a long-range settlement of the situation, including a cease-fire of five or more years.

This changeover began on the Israeli side among the officers and experts who liaise between the Palestinian territory, mainly Gaza, and the Israeli diplomatic echelons. The Israel Defense Forces' (IDF) Protective Edge campaign caused tremendous damage in Gaza. The Gaza economy was hit, thousands of people were slain, tens of thousands were wounded and hundreds of thousands were uprooted from their homes. Nevertheless, the fact that there were no protests on the part of the Gaza people against their regime caused the penny to drop on the Israeli side.

“I [finally] understood,” an upper-echelon security official told me recently, “that Hamas is here to stay. That even if the IDF entered Gaza and brought down the Hamas regime, it wouldn’t help. When we left, they’d return. It is not easy to come to terms with this understanding,” my source admitted. “But it is important to know that this is the situation. And if this is the situation, we have to make the best of it.”

According to Israeli analysis, the masses in Gaza translate the Protective Edge campaign into a heroic effort by Hamas to fight for the welfare of the Palestinian civilian. This includes lifting the blockade, increasing the work quotas, expanding the fishing range and increasing the supply of basic commodities. That’s why they agree to make such tremendous sacrifices. Once this was understood in Israel, the time came to translate understanding into action. This, too, took time to sink in.

The Israeli military leaders — starting from the head of Southern Command, the chief of IDF intelligence, the head of the Shin Bet and the chief of staff — view Gaza as a military threat, and rightfully so. From the IDF point of view, that Hamas went back to digging tunnels and producing rockets is the dominant issue. But this time, another point of view has grown from the insights gleaned from the territory. This is the reason why Ya’alon ultimately adopted a middle-ground policy, with preference to the civilian approach. This approach mandates an easement of the blockade on Gaza, while maintaining close supervision over security-related issues and multipurpose (construction) materials, a clear Israeli interest. Otherwise, the pressure cooker will explode again. “And every time that it explodes,” says the senior Israeli defense officer, “the damage will be greater.”

Ultimately, things started happening on the ground. Coordinator of Government Activities in the Territories Brig. Gen. Yoav (Poli) Mordechai, in close coordination with UN Special Coordinator for the Middle East Peace Process Robert Serry, established a sophisticated reconstruction apparatus. This apparatus facilitates Israeli-UN supervision and oversight to ensure that the cement entering Gaza will not be used for tunnels and that the industrial materials entering Gaza will not be used for rockets. Now, certain Gaza residents are permitted to leave the Gaza Strip: merchants, physicians, ill patients and other specialists. Gaza now receives export permits relatively easily: flowers and strawberries to Europe, laborers to the West Bank, agricultural products and fish to the Gulf states. The restricted, paralyzed Gaza economy is starting to show signs of life.

Simultaneously, all the destroyed houses in Gaza were mapped. A list was prepared of all the suppliers authorized by Israel, including lists of authorized materials to be brought into Gaza and the specific suppliers permitted to import them to the Gaza Strip. All homeowners whose houses were damaged and are in need of reconstruction get a voucher allowing them to receive a specific amount of cement and iron for repair and renovation. Meanwhile, the monies promised for Gaza reconstruction are not yet flowing; most of the countries that made verbal promises to contribute “forgot” to actually send the money. This shortage of cash means that it is impossible to smuggle large quantities of cement or iron into Gaza, and homeowners pay out of pocket for the materials. Thus, Israel is able to ensure that most of the cement and iron indeed reaches its original destinations.

As of now, Israel maintains a fragile equilibrium in its relations with the Gaza Strip: On the one hand, Israel understands that amelioration of Gaza distress will give Israel more time before the next explosion and decrease the frequency of conflicts with Gaza. On the other hand, Israel understands that a complete lifting of the blockade will allow Hamas to strengthen itself. This situation necessitates a fine-tuning coordination of interests and expectations even within the defense system between those who think that Gaza ought to be stabilized and others who feel that the pressure should continue, not let up.

In reality, the blockade has been largely lifted and the Hamas regime is stable. Israel hopes that it will continue to be so and that its governability in the Gaza Strip will persist over time.

Behind the scenes, the reality of the region subordinates the Middle East players to its caprices, time after time. If once upon a time, the word “Hamas” was analogous to the "Great Satan" in the eyes of the average Israeli, today Hamas has become the long-standing, familiar enemy, much preferred over the alternatives of al-Qaeda, the Islamic State (IS) and murderous Islamist chaos knocking on Israel’s gates from every which way. The Syrian Golan Heights is the scene of heavy conflict between the Jabhat al-Nusra rebels and President Bashar al-Assad’s army and Hezbollah; Jordan is beginning to receive threats and absorb terror attacks by IS along its main border and the Sinai Peninsula endures terrorist chaos running wild under IS inspiration. The proportions and venues change from time to time, but the overall picture remains the same.

Hamas underwent the same change that befell Assad’s regime in Syria: If at the beginning the consensus in Israel was that Assad had to go and that his departure would deal a strong blow to the “axis of evil” extending from Tehran via Damascus to Beirut, today the Israeli establishment is confused and no longer convinced of this axiom, in light of the IS alternative to Assad. In Israel, experts are saying, we are familiar with Hamas, Hamas is an address. Hamas’ goal is the welfare of the Gaza public, and it is aware of the fact that it cannot destroy Israel. We can live with that.

So what we see now on the ground are the constrained relations that are developing between Israel and Hamas' Gaza. Is this an apocalyptic vision of the “end of days”? Hardly. Is it the lesser of two evils? Evidently, it is.