Iranian negotiations and analysts have shown more nuance in latest statements about the process of removing sanctions. 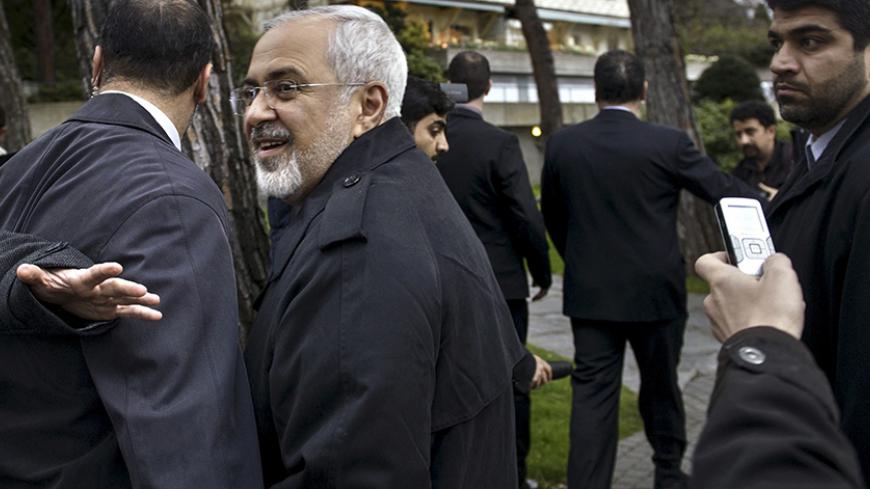 Iranian Foreign Minister Javad Zarif talks to members of the media while walking through a courtyard at the Beau Rivage Palace Hotel during an extended round of talks in Lausanne, April 1, 2015. - REUTERS/Brendan Smialowski
Arash Karami
@@thekarami
April 1, 2015

As nuclear negotiations between Iran and six world powers in Lausanne continue past the soft deadline of March 31, Iranian officials have made statements regarding sanctions removal that may show more flexibility than previously assumed.

Ayatollah Ali Khamenei, Iran’s supreme leader who has final say on the nuclear program, has previously said that all sanctions on Iran must be removed and that the deal will not be a multistep deal. Members of parliament and other officials have also stated this. Presumably, this means that once a deal is signed, all nuclear-related sanctions on Iran will be removed.

As with all other comments made by the supreme leader, competing sides attempt to interpret Ayatollah Khamenei’s statements through a bias that is beneficial to their own talking points. However, comments by Abbas Araghchi, one of Iran’s top negotiators, and Mehdi Mohammadi, a prominent conservative analyst whose views reflect the previous more hard-line nuclear negotiators in Iran, there appears to be a public consensus that not all sanctions will be removed at once but rather the removal of sanctions must be clearly stated.

Speaking from Lausanne to Iranian reporters April 1, Araghchi said: “We cannot have an agreement that does not contain the removal of sanctions. Certainly all the sanctions must be removed but the sanctions have a wide range, both quantitatively and qualitatively. The topics and issues of sanctions are very diverse. The types of sanctions and the issuer of sanctions are diverse: the Security Council, the European Union and America. These have to be separated and it has to become clear in what order it will take place.”

In a column titled “Dos and Don’ts of a Political Agreement,” Mohammadi also addressed the issue of sanctions, clarifying his views on how they should be removed. “All the sanctions have to be immediately removed after Iran implements its commitments within the framework of the final step,” he wrote. Second, “all the timing has to be in an fixed, clear and unconditional text.”

The article also referred to other instances of “final rounds” and “final steps,” implying that Iranian negotiators and analysts understand that, given the complex nature of how sanctions were applied, a very complex procedure would be required to remove them. This nuance may not be enough for some members of the six world powers, but it's a clearer picture of what the Iranians are thinking regarding the removal of sanctions.

The official deadline for these nuclear talks is the end of June, though by the end of March there was supposed to be an announcement of a political framework agreement. There have been reports that as negotiators work around the clock there may be a press announcement rather than an announcement of a deal. Though given the confidential nature of the talks, and the conflicting information released by the various sides, this too may change.