90% of Iran MPs: All sanctions must be removed

260 members of parliament signed on to a statement saying that, in case of a nuclear deal, all sanctions against Iran must be removed. 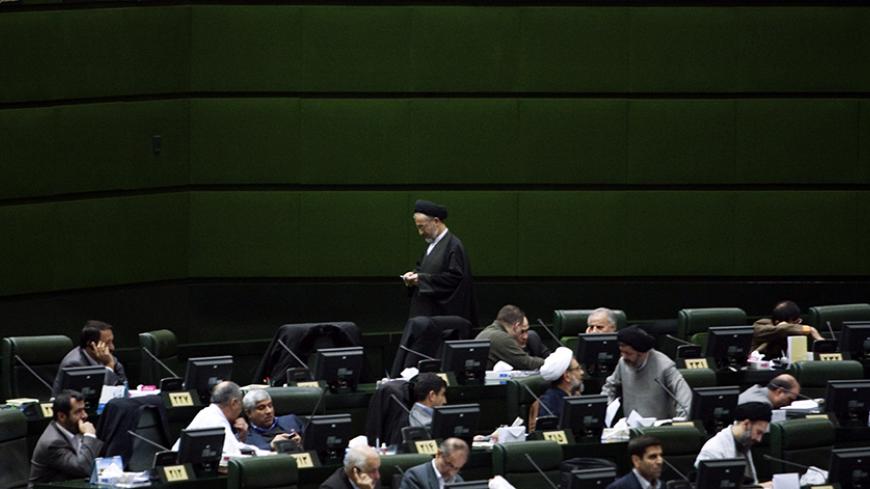 In their final session before the March 20 New Year, 260 of the 290 members of Iran’s parliament have signed a statement demanding that all sanctions on the country be removed in the case of a nuclear deal. According to Mehr News Agency, the statement has three conditions:

The statement is significant because if Iran and the five permanent members of the UN Security Council plus Germany (P5+1) agree to a comprehensive nuclear deal, Iran’s parliament would need to ratify additional protocols, which allow greater scrutiny for nuclear inspectors. But Speaker Ali Larijani said "cases that are at the National Security Council [such as the nuclear file] are authorized by the supreme leader [and] it's possible it may not reach parliament for ratifying."

Still, most Iranian officials who call for “all” sanctions to be removed seem to be vague if they are referring to nuclear-related sanctions or all the sanctions that have been imposed on Iran by the P5+1 countries. Ayatollah Ali Khamenei, the supreme leader who has final say on the nuclear program, has also said that a nuclear deal must be a one-time deal rather than a multistep deal. This could be construed as relating to sanctions as well, though it’s uncertain.

Larijani, a former chief negotiator himself, in discussing parliament’s role, also said that if the negotiators reach a “good” deal, that parliament will ratify the nuclear deal. He didn’t explain what a good deal would look like but added: “If we don’t reach a comprehensive deal, it’s not the end of the world and we’re living our own lives now without a comprehensive agreement and we have other approaches if there is not an agreement.”

In the 36 years since the Islamic Revolution, there have been numerous sanctions against Iran for various reasons. Presidents Jimmy Carter, Ronald Reagan and Bill Clinton all issued executive orders sanctioning Iranian goods and the oil sector. In 1995, Congress passed the Iran and Libya Sanctions Act, which was renamed the Iran Sanctions Act in 2006. Some US sanctions against Iran are related to human rights, specifically those targeted as human rights violators by the US Treasury, and are not connected to the nuclear program. The sanctions against the oil sector and financial transactions have been by far the most crippling.

Besides the US and European Union sanctions, however, since 2006 there have also been six UN Security Council resolutions against their nuclear program. While Iranian members of parliament insist that sanctions be removed at once, US media have reported that nuclear negotiators are discussing attempts to “phase out” sanctions against Iran.