What is Khamenei thinking on removing sanctions?

Ayatollah Ali Khamenei, Iran's supreme leader, said that the removal of sanctions has to be part of the nuclear agreement, not something that happens after the deal. 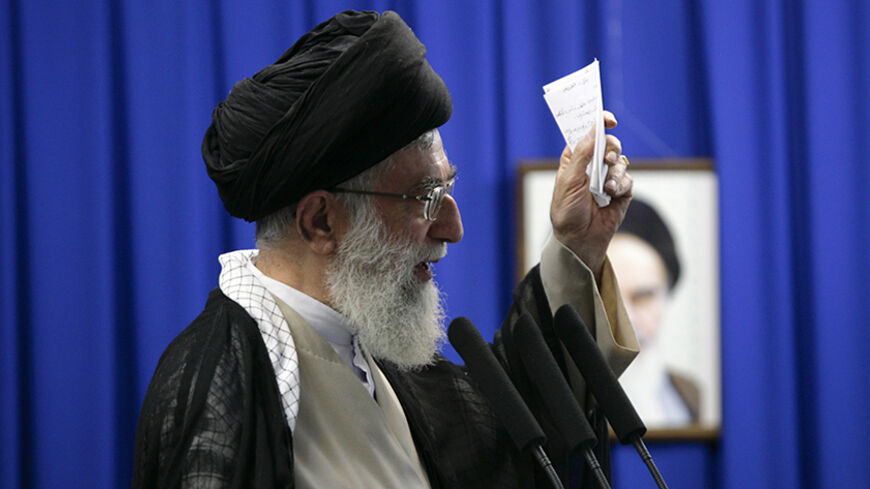 The issue of removing international sanctions on Iran is one of the most important aspects of the nuclear negotiations between Iran and the five permanent members of the UN Security Council plus Germany (P5+1). While the nuclear talks are confidential, there have been conflicting reports about how the sanctions can and should be removed in return for Iran reducing their nuclear program. During his March 21 Iranian New Year's speech, Ayatollah Ali Khamenei, the supreme leader who has final say on the nuclear program, discussed his positions on the nuclear talks and sanctions removal.

“What the Americans repeat, ‘We’ll sign the contract with Iran, then we’ll see if they act upon the contract, then we’ll remove the sanctions’ — this is wrong and unacceptable," Khamenei said. "The removal of sanctions is part of the negotiations, not the result of negotiations. Those people involved [in the talks] know well the difference between the two.

“The removal of sanctions should happen without any distance [delays] when an agreement is made.”

Sa’adollah Zaeri, an Iranian analyst whose work is published on the supreme leader’s website and in the hard-line Kayhan newspaper, spoke to Tasnim News Agency about the issue. “One of the important statements of the supreme leader is that the removal of the sanctions be in the text of the negotiations.” Zaeri said, “However, the last few months, the West tried with cleverness to avoid its commitments and introduce the sanctions as an issue of time and connected to Iran’s commitments.”

Zaeri said that the West tried to make sanction removal a “marginal issue” and that they had proposed “Iran reduce the nuclear program for 10 years and afterward if the West gives Iran a passing grade, then the sanctions will be removed.”

During his Nowruz speech, Khamenei also rejected the possibility of cooperation between Iran and the United States in the Middle East. The idea that both countries have a common interest in fighting the terrorist group the Islamic State and can cooperate on this issues has been floated by some in Washington and even by members of President Hassan Rouhani’s administration.

On this, Khamenei said: “The negotiations with America are about the nuclear program and nothing else, everyone should know this. We will not negotiate with America over regional matters. The goals of the Americans on regional matters are exactly the opposite of our goals. We want security and calm in the region … the policy of the US in the region creates instability.

“We definitely do not speak or negotiate with the Americans on regional, domestic or weapons matters. The negotiations are merely on nuclear matters and how we can reach a conclusion on the nuclear negotiations through diplomacy.”