Turkey sidelines itself in US-led coalition against IS

Turkey prefers to be a "reluctant subcontractor" rather than active participant in the international coalition against the Islamic State; US envoy seems to contradict Kerry on Syria diplomacy; Israel faces possible "diplomatic siege" after election; majority of Americans back US negotiations with Iran; Al-Monitor endorses new global standards to protect freelance journalists. 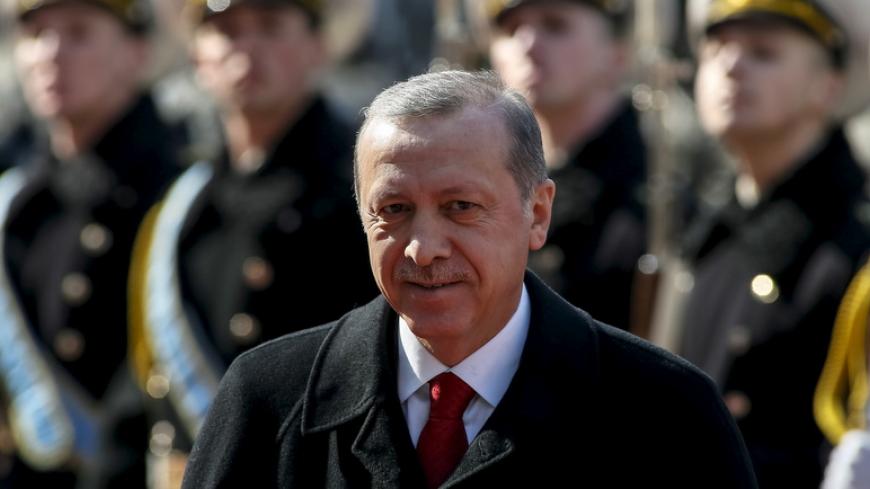 Semih Idiz writes this week that Turkey has sidelined itself in the battle against the Islamic State (IS) due to its single-minded pursuit of the ouster of Syrian president Bashar al-Assad:

“Ankara’s insistence on a military defeat of the Assad regime appears to be a recipe for prolonging the Syrian civil war. Assad, who continues to get support from Moscow and Tehran, has proven his staying power. The West, meanwhile, much to [Recep Tayyip] Erdogan’s annoyance, has made it clear it will not put the boots on the ground that would be required to defeat Assad.

“The West has also made it clear that its first priority is to defeat IS, and not to go after Assad. The same applies with regional countries like Saudi Arabia, Jordan and Egypt, which are all part of the US-led coalition against IS. The [Ahmet] Davutoglu government, however, continues to believe that targeting Assad should be the main priority, but has no power to bring this about.”

Kadri Gursel explains: “Turkey is hardly to be seen in the picture, neither in the small nor the big one [in the fight against IS]. Not because it lacks weight, but because it has refused to be an active member of the anti-IS coalition — ever since summer 2014 when it chose to withhold military support from its ‘strategic ally,’ the Kurdistan Regional Government (KRG), as IS threatened Erbil after capturing Mosul.

“Turkey is not an active coalition member because it has refused to open its air bases to the use of coalition aircraft bombing IS. Had it opened those bases, especially the Incirlik base, the [Justice and Development Party's (AKP)] Turkey — so fond of the Sunni power image — would have become part of the coalition that would eventually liberate Mosul or Anbar, alleviating the Sunni sentiment of defeatism.

“AKP’s Turkey, however, chose to be the coalition’s reluctant subcontractor rather than its active member. Its essential motive was ideological. AKP ideologues see IS as a 'Sunni actor' and thus attribute the group a certain rationale.”

A test of Turkey’s willingness to be an active, rather than reluctant, participant in the anti-IS coalition could be the forthcoming attempt by Iraqi military and allied forces to retake Mosul. The use of the Incirlik air base would be an assist for the air campaign against IS. Turkey has so far held the use of the base hostage to a US commitment for a more assertive US policy to oust Assad.

Making his umpteenth visit to Turkey since his appointment as envoy in September 2014, presumably in part to try to get an agreement for use of the Incirlik air base, John Allen, in a statement released by the US Embassy in Ankara, lauded the “constructive” talks around the “shared efforts” of the United States and Turkey “to degrade and defeat ISIL [IS].” Allen “welcomed Turkey's support in training vetted Syrian opposition, noted recent Turkish actions to increase border security and restrict the flow of foreign fighters, and thanked Turkey for its generosity in hosting Syrian and Iraqi refugees displaced by violence.”

Allen did not mention either Incirlik or that Turkey recently closed one of the key border crossings for Syrians seeking to flee the carnage in Aleppo, as Mohammed al-Khatieb reported from Aleppo.

Nor did Allen clarify the US position on Foreign Minister Mevlut Cavusoglu’s Feb. 23 statement that Turkey expects Syrian fighters trained in Turkey to battle the Syrian government, as well as IS, as this column has reported.

Allen did, however, make a point to clarify, or reiterate, “that the United States' position on Assad has not changed. He has lost all legitimacy to govern, that conditions in Syria under his rule have led to the rise of ISIL and other terrorist groups, and that we continue to seek a negotiated political outcome to the Syrian conflict that does not in the end include Assad.”

Allen’s "reiteration" was interpreted as a reaction to US Secretary of State John Kerry’s comments on CBS’ "Face the Nation" March 15 that the United States would “have to negotiate in the end” with Assad, which enraged Turkish officials.

Meanwhile, Russian Deputy Foreign Minister Gennady Gatilov said that invitations had been extended to UN Special Envoy to Syria Staffan de Mistura and “a broad range of opposition organizations and groups,” as well as Syrian government officials. While many opposition figures refused to attend the first round of talks in February, as this column has reported, the announcement of a second round, which could include de Mistura, while perhaps still a thin reed, remains the only diplomatic track among Syrian parties since the collapse of the Geneva process last year.

Turkey’s hedging on IS may yet force a more honest presentation by US officials about the divisions between Ankara and Washington over Syria. A better outcome would of course be an agreement for the United States to use the Incirlik air base to strike terrorist bases in Syria and Iraq, because it is the right thing for a NATO ally to do, not as a result of a quid pro quo for a deeper US military commitment against the Syrian government. Americans are convinced of the threat from IS and worried about being drawn into another protracted conflict in the Middle East. A CNN/ORC poll last week indicated that 80% of Americans believe IS poses a “fairly serious” or “very serious” threat to the United States, and 79% are “somewhat worried” or “very worried” that the conflict could become a wider regional war.

Ben Caspit writes that Israeli Prime Minister Benjamin Netanyahu is in a “panic” to walk back the hard-line positions he took during the waning days of his campaign for prime minister:

While Netanyahu may have a suitably diplomatic foreign minister candidate in Moshe Kahlon, as analyzed by Akiva Eldar, Caspit notes there could be consequences if he cannot convince Kahlon to accept the position:

“If Netanyahu does have a right-wing, ultra-Orthodox government, if the peace process disappears from the region once and for all, and if Netanyahu does nothing to try and restore trust between him and the Palestinians, Israel could find itself in diplomatic siege in less than a year.”

Shlomi Eldar reports that Israeli Arabs are beyond frustrated with the results of the elections after fielding a united party for the first time:

“Even though they fulfilled their goal of becoming the third-largest party in the next Knesset (with 13 seats), they were disappointed. The party will not be able to block a right-wing government, and the promise to work for a fruitful coexistence with the Jewish sector appears as distant as ever.”

In the West Bank, Palestinian President Mahmoud Abbas is hoping to utilize the Israeli swing to the right to appeal to the international community.

Daoud Kuttab writes: “To further isolate Israel, the Palestinians will be pushing hard to show the world that the so-called only democracy in the Middle East is in reality implementing an apartheid regime against 4 million Palestinians. Palestinians living under Israeli military control are disenfranchised and are denied their basic political rights. If the idea of a Palestinian state is no longer on the books, as per the statement of Netanyahu on the eve of the elections on March 16, this automatically means that the majority of Palestinians in Palestine are being ruled by the Israeli minority.”

The Palestinian leadership faces its own problems, however, with a deepening rift between Fatah and Hamas, both parties in a consensus government.

Ahmad Melhem reports: “The consensus government was sworn in last June 2, yet it has failed to conduct the task of preparing for presidential and legislative elections, as required. As detailed in the agreement, the government's main duty was to prepare for elections, since the Legislative Council is disabled and no longer has any powers. Furthermore, the institutions of the West Bank and the Gaza Strip were to be unified under the supervision of a government based on popular support.

“Fatah and Hamas have also failed to implement other clauses in the reconciliation deal, including ‘community reconciliation, developing the PLO, holding elections and resuming the work of the Legislative Council.'”

While the two parties have recently traded accusations of treachery and coup-plotting, Hazem Balousha reports that a truce under the aegis of the unity government could be in the works to ease the Israeli siege of Gaza.

Asmaa al-Ghoul writes that Hamas has launched its own diplomatic initiatives with Islamic Jihad seeking to repair fractured relations with Egypt.

68% of Americans back Obama stance on Iran

The diplomatic talks in Lausanne, Switzerland, are expected to resume as soon as March 25 after a break for Nowruz, the Persian New Year holiday.

Al-Monitor reports this week from Tehran on the clash between traditionalists and modernists over the Iranian fire festival Chaharshanbe Suri.

Although some members of Congress continue to seek to derail a nuclear agreement between the P5+1 and Iran, including a joint letter circulated by hawkish US and European lawmakers warning of more sanctions in the event of a bad deal, as reported by Julian Pecquet, a CNN/ORC poll last week revealed that 68% of Americans favor US negotiations to prevent Iran from developing a nuclear weapon.

Every day Al-Monitor’s writers, many of whom are freelancers, deliver some of the best reporting from the region. Sometimes telling those stories means they face difficult and potentially dangerous situations. The safety and security of all those who report for Al-Monitor is a top priority for us, and this week we are proud to announce that Al-Monitor has endorsed the Global Safety Principles and Practices, which outline a global standard for protecting freelancers.