Where is Turkey’s place in strategy against IS?

Turkey is absent from the Iraqi leg of the strategy to defeat the Islamic State, and stands no chance of any major role in the Syrian leg, too, as long as it remains obsessed with toppling Assad. 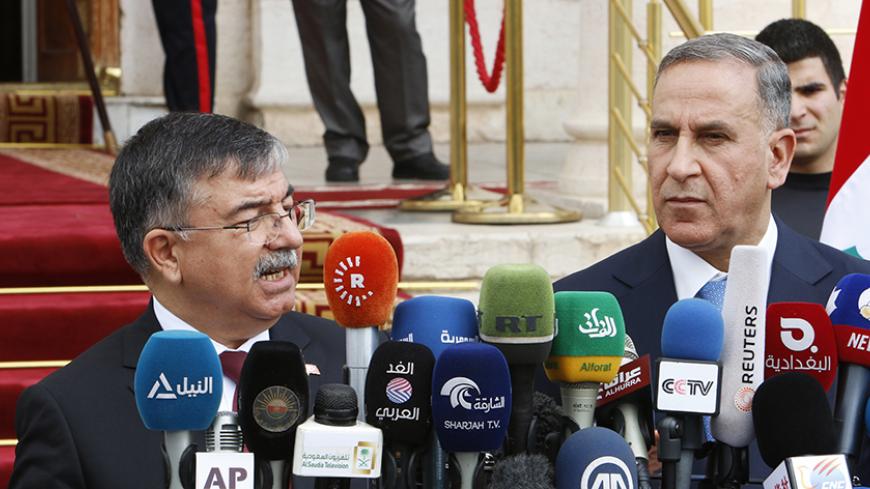 The Iraqi army and Shiite militias are widely expected to begin a major offensive to retake Mosul from the Islamic State (IS), backed with air support by the international coalition. The eventual recapture of Iraq’s second-largest city is likely to mark a turning point in the strategy against IS.

Based on latest information from various sources, the outlines of the planned strategy against IS in Iraq and Syria emerge as follows: In Iraq, the primary objective is to terminate IS’ current de facto “statehood,” whereby it rules over wide swaths of territory and urban areas, and reduce it back to a terrorist organization. This requires dismantling the group’s geographical contiguity. Hence, the initial strategy aims to retake only some of the IS-controlled cities, towns and regions to break their link with the remaining areas and deprive IS of territorial depth. The initial phase also aims to break or weaken as much as possible the connection between the group’s bases in Syria and its forces in Iraq.

Notable progress has already been achieved. Since August 2014, IS reportedly has been ousted from a quarter of the territory it had seized in Iraq.

The recent offensive of the Iraqi army and Shiite militias on Tikrit as well as the Kurdish peshmerga’s attacks on IS forces west and south of Kirkuk have all been part of the same strategic rationale. By losing Tikrit, IS will largely lose the territorial connection between Mosul and the western province of Anbar.

If things go as planned, a large-scale offensive will kick off in the spring as the second phase of the strategy. Though all indications point to Mosul as the objective, the city is not the sole potential target of the spring offensive. Anbar and its two largest cities, Fallujah and Ramadi, stand out as two other possible targets on the map.

The sectarian rift dividing Iraq’s Arab population has emerged as a major factor to be considered in the second stage of the war. Before the IS occupation, the population of Ninevah province, where Mosul is located, had an ethnic, religious and sectarian diversity, with Sunni Arabs forming the majority in Mosul city. IS’ religious and sectarian cleansing campaigns should have tipped the demographic scale further in favor of the Sunnis.

The Sunni-majority Anbar province, for its part, represents a “Sunni depth” in the war against IS. The ground forces supposed to liberate Anbar’s Sunni population are the Shiite-dominated Iraqi army and Shiite militias backed by Shiite Iran. Given the animosity between Iraq’s sectarian groups, another wave of defeatist sentiment is likely to descend on Sunnis when they end up being liberated by Shiites from the Sunni IS. Hence, the second stage of the strategy dictates the need for a political settlement to back up the military solution.

The decision-makers’ failure to do some brainstorming on this issue could result in a post-IS lull becoming the incubator of a new war.

Let’s do that brainstorming by magnifying a bit the picture to include Iraq’s neighbors. Iran was already part of the smaller picture. And where does Turkey stand as Iraq’s northern neighbor that has positioned itself as a regional “Sunni power” under the rule of the Islamist Justice and Development Party (AKP)?

Turkey is hardly to be seen in the picture, neither in the small nor the big one. Not because it lacks weight, but because it has refused to be an active member of the anti-IS coalition — ever since summer 2014 when it chose to withhold military support from its “strategic ally,” the Kurdistan Regional Government (KRG), as IS threatened Erbil after capturing Mosul.

Turkey is not an active coalition member because it has refused to open its air bases to the use of coalition aircraft bombing IS. Had it opened those bases, especially the Incirlik base, the AKP’s Turkey — so fond of the Sunni power image — would have become part of the coalition that would eventually liberate Mosul or Anbar, alleviating the Sunni sentiment of defeatism.

AKP’s Turkey, however, chose to be the coalition’s reluctant subcontractor rather than its active member. Its essential motive was ideological. AKP ideologues see IS as a “Sunni actor” and thus attribute the group a certain rationale.

Turkey’s absence from the picture in the war against IS in Iraq was demonstrated once again at the Sulaymaniah Forum held March 11-12 in the northern Iraqi city of the same name. At a panel titled “The Strategy to Defeat ISIS: An End or Sowing the Seeds of a New Conflict?” none of the prominent speakers mentioned Turkey or its president, Recep Tayyip Erdogan, even once. The panelists included Iraqi Vice President Osama al-Nujaifi, Iraqi national security adviser Faleh Fayadh, KRG presidential chief of staff Fuad Hussein and Brett McGurk, the US president’s deputy special envoy for the Global Coalition to Counter ISIL.

In the Q&A session, I asked the panelists why they failed to mention Turkey or Erdogan. Fuad Hussein was the one to reply. “Turkey’s priority is different. For Turkey, the fight has to be done against Bashar al-Assad, while the priority of Arabs, Kurds and the international community is to fight against ISIS. If Turkey would change its own priority then the question would be different,” Hussein said.

And he was right. Ankara prioritizes Assad and Syria, while the international coalition and its regional allies see IS and Iraq as the priority.

McGurk did say that defeating IS in Iraq was likely to be a long-term struggle. Yet, sooner or later Syria’s cities will be next in line for liberation from IS. Hussein also underscored this prospect, stressing that any comprehensive strategy against IS that ignores Syria was doomed to fail. “The fight must be a collective fight. If the strategy is about weakening and turning ISIS into a terrorist organization, this strategy for all of us must mean defeating ISIS in Iraq and in Syria. If it’s not defeated in Syria, they will come back to Iraq. The Kurds in Syria can be our partners,” he said.

The Syrians Kurds have already demonstrated they are an ally in the international effort to combat IS. Yet, their support is not enough. The prospect of training and equipping several thousand “moderate rebels” to create a force to fight and defeat IS in Syria is not seen as a realistic option either.

And what about Turkey? Could it become an active member of the coalition when the effort against IS shifts to Syria? Or shortly put, will Turkey open its air bases then?

The AKP’s position has not changed so far. Back on Nov. 15, Prime Minister Ahmet Davutoglu said Turkey would “assume a responsibility” if an “integrated strategy” was adopted to remove both IS and Assad. In hindsight, he was basically saying that Turkey would open its air bases to the use of coalition aircraft only on the condition that Assad is toppled.

Today, however, the United States has a CIA director who says they don’t want to see “a collapse of the government and political institutions in Damascus” because it could open the way to IS and other jihadists seizing power. The US secretary of state also believes “we have to negotiate in the end” with Assad.

This new American approach is no doubt a political investment in the prospective Syrian leg of the war strategy against IS. Once the group is defeated in Iraq and retreats to Syria, cooperation with Assad would become inevitable. A sort of a “Geneva III” political settlement format could lay the ground for such cooperation.

Again, the same question pops up: Where does Turkey stand in the picture?

Turkey has conditioned its support for the coalition on the toppling of a regime with which the international community is bound to cooperate against IS as part of the parameters of a political solution. By doing so, Turkey has tied its own hands. It can have a place only in the fringes of the picture as long as it remains obsessed with bringing down Assad.

The Institute of Regional and International Studies of American University of Iraq, Sulaimani provided flights and accommodations for the author to attend the Sulamani Forum.