Turkey is not keen to have the Kurds, Shiites and the Damascus regime be bolstered in the fight against the Islamic State. 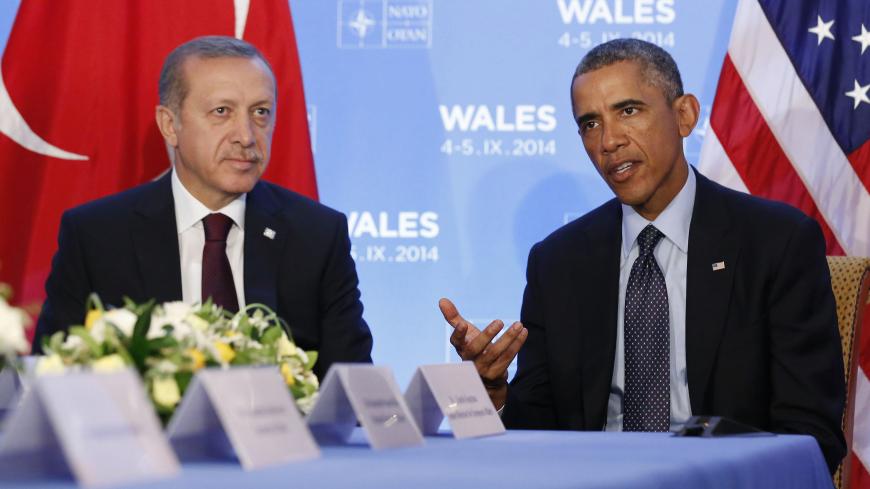 US President Barack Obama speaks as he hosts a bilateral meeting with Turkish President Recep Tayyip Erdogan during the NATO summit at the Celtic Manor Resort in Newport, Wales, Sept. 5, 2014. - REUTERS/Larry Downing

After the United States announced that it was forming a "core coalition" of 10 countries to combat the Islamic State (IS), eyes turned to Turkey. Will Turkey really have a place among the 10 countries listed by Reuters? If so, what role would it play? After the NATO summit in Wales on Sept. 5, US Secretary of Defense Chuck Hagel said that the core group will facilitate the formation of a wider and more comprehensive group in the future. US Secretary of State John Kerry said the coalition should be set up in such a way to prevent IS from gaining more territory without having to send in alliance soldiers, by supporting Iraqi security forces and others who are ready to take on IS. He said the red line for everyone is not to launch a ground operation.

According to behind-the-scenes information reported by CNN Turk after the meeting between US President Barack Obama and Turkish President Recep Tayyip Erdogan, Ankara is not looking favorably upon the idea of participating in the core group. The daily Cumhuriyet reported that Turkey has reservations and that the Obama-Erdogan meeting agreed that support from Turkey "should be behind the scenes."

Turkey’s reservations were listed as:

Reuters quoted a US diplomat saying that because of the existing specific situation, Turkey’s contribution cannot be very visible.

Turkey’s dilemmas in the struggle against IS are not limited to the status of the hostages. The United States has set a red line of not putting boots on the ground. In such a situation, it is inevitable that ground forces to fight IS have to come from local forces. Lasting success requires that the local forces consolidate their hold. The ground forces that recovered strategic targets such as the Mosul Dam and the town of Amerli with US air support were actors Turkey is not very keen on supporting. In Amerli, Shiite militias as the Peace Brigades and Abu Ali Brigades and units of the Iraqi army dominated by Shiites led the way. Operations in the north are conducted by peshmerga, the military arm of the Kurdistan Regional Government, the Kurdistan Workers Party (PKK) and the Kurdish People's Protection Units (YPG) from Syria. Pushing back IS without the local forces that Ankara has expressed reservations about will not be possible. Kerry, by saying, "We have to support the others who are ready to resist IS," underscored the importance of these local forces. Turkey, which interpreted the uprisings in Mosul, Salahuddin and Anbar provinces as Sunni rebellions against Iraq's Shiite government and kept in close contacts with those groups in the hope that there could be a pro-Sunni outcome, doesn’t want the anti-IS coalition to shore up Shiite forces. The following remarks by Turkish Prime Minister Ahmet Davutoglu about IS (which previously called itself ISIS, or the Islamic State in Iraq and al-Sham) have to be seen as an expression of Turkey’s expectation for a new power balance favoring the Sunnis: “Anger, marginalization and insults led to sudden eruption of reaction on a wide front. If the Sunni Arabs had not been marginalized in Iraq, there wouldn’t be such an accumulation of fury. The structure we call ISIS could be seen as a radical terror organization. But among those joining it are Turks, Arabs and Kurds.”

The second important dilemma for Turkey is the PKK and the YPG buttressing their power in the region by fighting IS and gaining legitimacy in the eyes of both the people of the region and of the international community.

Since the dominant Democratic Union Party (PYD) emerged as the catalyst of de facto autonomy in Syria, Turkey has had to revamp its approach. This necessity was felt in defending the borders with Iraq and Syria, and even in ensuring the security of the Tomb of Suleiman Shah on the Euphrates River that is considered Turkish territory. Turkish military movements to resupply the Turkish troops at the tomb and to rotate them have to be done in cooperation with the YPG. Does Turkey cooperate with IS or the YPG or the PKK? Co-chair of the Kurdish People's Democracy Party (HDP) Selahattin Demirtas said, "It could sound marginal, but the PKK is fighting against [IS] barbarism. If there will be peace with Turkey, and the PKK is to give up armed struggle against Turkey, why not help them with weapons now?” He thus brought onto the agenda the question that Turkey had been trying to avoid. Turkey has to decide whether to ensure the security of the peace process by turning enmity to cooperation or to lose the entire game by magnifying the fears that the weapons Kurds might acquire will be one day used against Turkey. Turkey’s fears, of course, limit the room for maneuver for Turkey to become the regional actor that Justice and Development Party (AKP) leaders so much want it to be.

One more dilemma: The possibility that IS, which makes significant money with the diesel fuel it smuggles into Turkey, uses Turkey’s borders as a logistical route to direct attacks against Turkey. IS, which has been able to organize in major Turkish cities, could very well target these cities. Reports and warnings on such a possibility are abundant. Should IS disintegrate, the country it will first withdraw to and reorganize in cells will be Turkey.

This is obviously a longer-term headache, but what is also undeniable is that Turkey is much more worried than it was before IS' attacks before its invasion of Mosul. The government had earlier even said of the Mosul consulate seizure: “Our consulate is Turkish territory. But an attack against it and hostage-taking doesn’t have significance for Turkey. Turkish land is not the target.” Turkey — the only country of the core group that has a border with IS that makes it the most obvious and easiest target for reprisals — carried its concerns to the NATO summit. Other countries that could be IS targets are not in the core coalition. Jordan, which IS wants to add to its caliphate, did not make an appearance with the coalition, although Jordan's King Abdullah was at the NATO summit and his country was tasked with providing intelligence about forces on the ground. Saudi Arabia, which serves as a financial source for such operations, was another country that did not make a showing.

An additional worry of the AKP government is the possibility of the Syrian army regaining power after the cleansing of IS. Erdogan is not ready to be neighbors again with a Syria still governed by Assad. The Obama administration has not yet decided whether it will cooperate with Assad or with Assad’s foes against IS. In Iraq, a loose partnership was worked out with Iran and the Muqtada al-Sadr movement that fought against the US invasion, but it is not that easy to decide when it comes to Syria. Although Obama may continue to keep on the table the option of supporting the moderate Syria opposition, there is no guarantee that it will work against extremist groups such as IS. This is why at the moment the United States wants to concentrate on IS.

There are two candidates strong enough to fill a vacuum to be left by IS: the Islamic Front, which itself includes radical elements, and al-Qaeda’s Syria extension, Jabhat al-Nusra. That is enough to complicate the efforts to formulate a strategy for Syria.