Is Turkey the weakest link in anti-IS coalition?

Held back by political weaknesses and ideological constraints, Ankara is likely to be the weakest and most reluctant member of the planned coalition against the Islamic State. 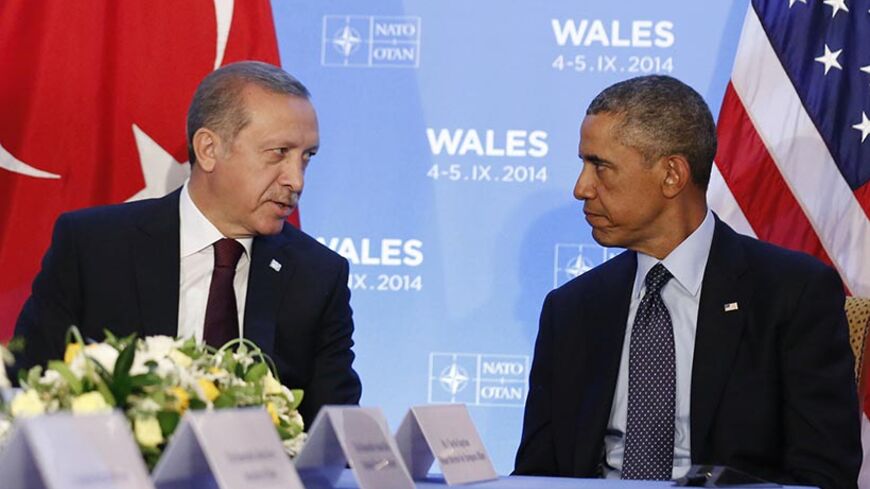 Turkey is likely to be the weakest, most reluctant and most timid member of the coalition Western allies are building to combat the Islamic State (IS), judging by Ankara’s initial reactions, the situation on the ground and the ideological constraints and political weaknesses of the Justice and Development Party (AKP) government.

At the Sept. 4-5 NATO summit in Wales, US Secretary of State John Kerry said the coalition — comprising the United States, Britain, Canada, France, Germany, Australia, Turkey, Italy, Poland and Denmark — should come up with concrete plans and greater support from regional powers by the time the UN General Assembly convenes in New York on Sept. 16.

Turkey is the group’s only Muslim nation and the only country that borders crisis-ridden Syria and Iraq. One may suggest these two peculiar features could legitimately entitle Turkey to certain caveats in the coalition. Yet, initial signals indicate that seeking caveats could lead also to serious rifts between the allies.

Turkish press reports from bilateral talks between the Turkish delegation, led by President Recep Tayyip Erdogan, and US counterparts on the fringes of the NATO summit have already laid bare the challenges to Turkish-American unison in the coalition.

The Cumhuriyet daily reported Sept. 6 that Erdogan, in his meeting with US President Barack Obama, voiced reservations about the planned coalition. It quoted Erdogan as saying, “We are opposed to this would-be coalition supplying weapons to the central government in Baghdad in particular. The weapons left there [the weapons the United States left the new Iraqi army when withdrawing from Iraq] are today in the hands of [IS]. The weapons could undermine our settlement process [with the Kurds]. They could have an adverse impact on the process. … The coalition to be formed against [IS] should not be strengthening [Syrian President Bashar al-] Assad.”

According to Cumhuriyet, Erdogan signaled that Turkey’s contribution to the coalition would be further limited because of the 49 Turks IS took hostage, among them the consul general, when it stormed the Turkish Consulate in Mosul on June 11. “We don’t want our hostages to be killed like your journalists,” he was quoted as saying.

Erdogan’s reported remarks — not denied as of Sept. 7 — point to three weaknesses and a concern about the weakest link, which Turkey is in the 10-member coalition.

Ankara has used virtually all means to topple the Damascus regime, except sending troops. Now it worries the struggle the Western alliance seems resolved to wage on IS could legitimize and strengthen Damascus. It doesn’t want this to happen. Ankara is still struggling to come to terms with the new reality in the region, forcefully refusing to accept the reality of its own defeat in the proxy war it waged on Damascus — a problem with serious psychological aspects.

Second, Ankara has antagonized Baghdad with its support for independent oil exports from Iraqi Kurdistan and its pro-Sunni interference in Iraq. It doesn’t want to see Baghdad strengthened as part of the struggle with IS. Yet, restoring central government authority in IS-occupied areas is an obvious objective for the coalition and thus, beefing up the Iraqi army is a prerequisite.

Ankara’s third weakness is the 49 Turkish hostages IS holds. At first glance, one certainly accepts that the hostage problem ties Ankara’s hands in terms of fighting IS. But if inaction against IS and minimum cooperation with the Western alliance is a choice beyond the issue of hostages, then “the hostage problem” comes in handy as a selective and instrumental excuse.

The AKP government has imposed a media blackout on news and commentaries about the hostages, and appears free from any real public pressure on the issue. “The hostage problem” at present offers Ankara a pressure-reducing comfort zone as it vacillates between the West and IS.

However, Ankara’s inertia does not guarantee the hostages’ safety. The United States has continued to bomb IS targets despite the savage killing of two American journalists. Growing US pressure on the organization may one day result in various perils for the lives of the Turkish hostages, too.

Turkey faces a fourth constraint that Turkish officials refuse to publicly admit: The country is vulnerable to IS terrorist attacks. For IS, Turkey is not only a two-way bridge between Europe-North Africa and Syria-Iraq, but a country where it has become organized, recruiting jihadists. IS and al-Qaeda-linked groups are present and organized in Turkey. Hundreds of Turks are known to have joined IS in Syria and Iraq, and some have been killed.

At a news conference on Sept. 3, Atilla Kart, a lawmaker for the main opposition Republican People’s Party (CHP), revealed the code names and birthplaces of 90 Turks killed over the past two years in the ranks of jihadist groups in Syria. Kart, who referenced “academic research,” said IS recruited militants mostly from Adapazari and its environs in the northwest and the Konya region in central Turkey. In Istanbul, recruitment concentrated in conservative, impoverished suburbs such as Sultanbeyli, Bagcilar and Esenler. Kart said IS recruited militants also through a number of Turkish Islamic foundations, associations and religious learning centers, saying it would be inconceivable for the security forces to be unaware of them.

Indeed, IS-linked activities have expanded and become more visible in Turkey in recent months. On June 17, for instance, the Haberturk daily reported about an association using the IS emblem in Istanbul’s low-income Gungoren neighborhood. On July 29, the media carried images of hundreds of people from an IS-linked group performing an open-air Eid al-Fitr prayer near Istanbul.

With those realities on the ground, one might well argue that the contributions coalition member Turkey could make to regional security in light of its caveat-related position could not be limited to securing its Syrian border and stopping the jihadist traffic. Of course, we are not speaking here of a permission to use the southern Incirlik air base for strikes on IS. This option remains in the scope of caveats and seems highly unlikely.

However, as a country with a peculiar geographical position and Muslim identity, Turkey gets not only the right to caveats but also greater responsibilities. Beyond securing its borders, Turkey has the obligation to enact measures to prevent young Turks from joining IS, including primarily the surveillance and elimination of IS activity and recruitment networks inside Turkey.

No doubt, the AKP government’s policy and hawkish rhetoric vis-a-vis Syria since 2011 has had an indirect effect in encouraging young Turks from the most conservative social segments to join the “jihad.” It is high time for AKP leaders to realize that their sectarian policies and hard-line rhetoric vis-a-vis Syria and Iraq have produced a blowback with direct threats to Turkey’s security.

Finally, we come to the AKP government’s ideological constraint, which is best illustrated in its leaders’ continuous reluctance to label IS as “terrorist.” This attitude has nothing to do with tactical considerations to avoid angering an IS that holds 49 Turks hostage. Had it been so, it could have been considered a “political” weakness. But the AKP government and its media have never referred to IS as a terrorist group, calling it a “radical element.”

In an Aug. 8 television program, then-foreign minister and current Prime Minister Ahmet Davutoglu called the organization a “terrorized” rather than terrorist group. “[IS] can be seen as a radical, terrorized formation. However, there are Turks, Arabs and Kurds in its ranks. The structure there [in Iraq], the earlier displeasure and resentments have led to a widespread reaction on a large front,” he said. Davutoglu’s approach could be seen as an attempt to understand and rationalize IS. Nevertheless, it also shows that IS enjoys a remarkable “caveat” in the mindset of Turkey’s leadership.