Turks dislike Islamic State, but would leave fight to others

A recent survey by Metropoll, a prominent Turkish polling company, indicates that only 1.3% of Turks are sympathetic toward the Islamic State. 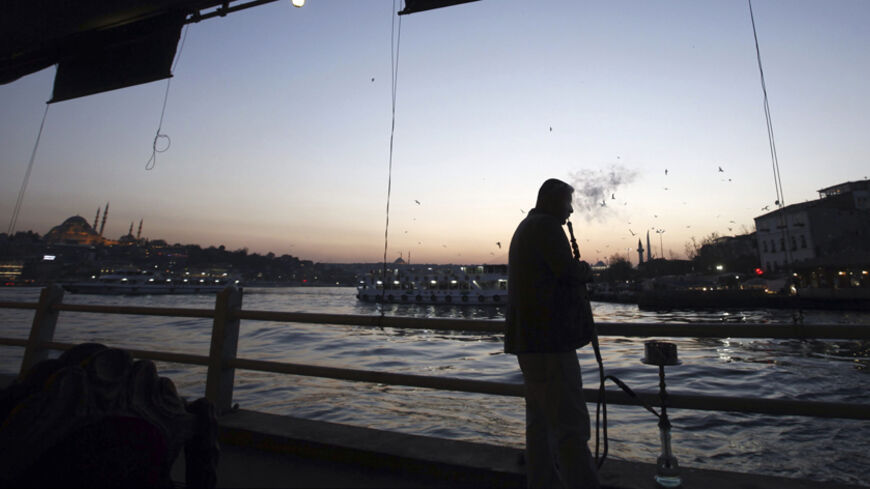 A man smokes his water pipe at the Galata Bridge in Istanbul, April 8, 2014. - REUTERS/Osman Orsal

Turkey's position on the Islamic State (IS) has become a bit clearer with the Sept. 23 declaration by President Recep Tayyip Erdogan that the government will join the fight against the group. Turkey had officially designated the organization a “terrorist” group in October 2013, but Ankara’s fixation on the Bashar al-Assad regime as the fundamental problem in Syria overshadowed concerns about IS. The IS raid on Turkey’s Mosul Consulate in June 2014 helped Ankara wake up to the threat, but it also tied its hands, because IS took 46 Turkish citizens hostage in the operation.

Now that the hostages have been released, Ankara feels a bit more comfortable taking a bolder stance against IS. Moreover, Turkish public opinion does not seem to be an obstacle to such a position. In a recent New York Times op-ed, I wrote, “The Islamic State is an abomination for … Turkish society — which, despite some illiberal tendencies, subscribes to a peaceful and pro-democratic understanding of Islam.” This stance was confirmed by Metropoll, a prominent polling organization that takes monthly surveys of “Turkey’s Pulse.” The survey published Sept. 24 concerns Turkish public opinion on IS. Based on interviews with a statistically representative 1,876 individuals in 28 provinces, the survey revealed an overwhelming distaste for IS in Turkish society. Here are some of the highlights of the polling:

In other words, almost all the survey results point to a nationwide distaste for IS, including voters for the “conservative,” that is, Islamist, AKP. That said, worries about the group’s threat to Turkey were a bit higher among supporters of the secularist CHP.

Meanwhile, backers of the pro-Kurdish Peace and Democracy Party (BDP) proved to be the most anti-IS camp. Among this group, support for Turkey taking part in international military operations against IS stood at 82.3%, in contrast with the 52% national average. This is perhaps understandable, because Turkey's Kurds are alarmed about the IS onslaught against their brethren in Iraq and Syria.

None of this means that there are no IS sympathizers in Turkey. Indeed, the survey found 1.3% of respondents to be sympathetic toward the group, which is not an insignificant number in a nation of 75 million people. There is probably slightly more sympathy for other (relatively more moderate) jihadist factions in Syria, such as Jabhat al-Nusra. Hence, some recruitment for both IS and these other groups is likely taking place in Turkey. Of note, Umit Yasar Toprak, a Turkish citizen who had joined Jabhat al-Nusra, was killed Sept. 23 in Syria in an airstrike by US forces.

Yet, the fact remains that jihadism is a marginal trend in Turkish society, and sympathy for jihadists — especially those such as IS, which has murdered and oppressed large numbers of innocent civilians, violating the classic rules of jihad — is minuscule. The overwhelming majority of Turks seem to agree with Mehmet Gormez, Turkey’s top cleric, who said, “[IS'] actions have no place in Islam.”