Turks rumored to be joining the Islamic State

According to a new poll, an overwhelming majority of Turks are totally opposed to the Islamic State, yet some Turks are likely joining IS ranks. 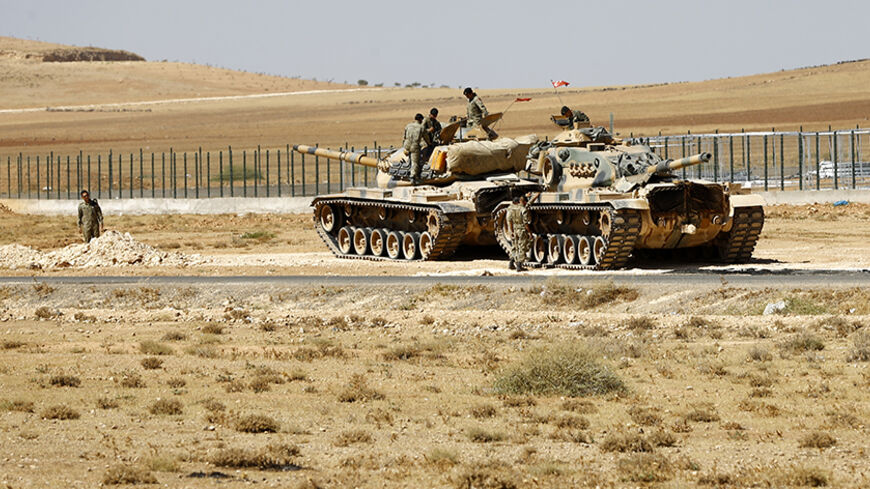 Turkish soldiers stand on tanks at the Syrian-Turkish border fence near the town of Suruc in Sanliurfa province, Sept. 23, 2014. - REUTERS/Murad Sezer

Metropoll's latest public survey about the Turkish people’s perception of the Islamic State (IS) found that an overwhelming majority of the population, 93.6%, don't sympathize with this terror organization. The Ankara polling firm did find, however, that 1.3% do sympathize with IS. Since Turkey has a population of roughly 77 million, that could mean there could be a million potential IS militants in the country.

While Turkish President Recep Tayyip Erdogan and Prime Minister Ahmet Davutoglu deny the possibility of such a potential and blame Western countries for failing to stop foreign jihadists who travel to Syria via Turkey, the facts force a broader reality check and ideally will create enough pressure for the government to take concrete steps to avert this threat. Dogu Ergil of Ankara University, who has years of expertise studying terror organizations and Islamic militancy, told Al-Monitor that the issue should not be the number of Turkish citizens joining the ranks of IS (and it is nearly impossible to come up with a reliable number) but rather whether there is a cultural base in the country to help IS-like terror organizations operate and spread in Turkey and beyond. Ergil said the presence of political Islam is the cardinal challenge in the effort to defeat radicalism in Islamic communities.

“Is there a cultural base in Turkey that encourages people to join IS? There is, and that is what is important,” Ergil said. “While this has nothing to do with the religion itself, if peaceful crowds cannot find a way to avert this radical ideology, there will be no escape from deeming Islam [as equivalent] with radicalism, and this religious ideology will then eventually lead to legitimizing even the most radical actions.”

He added: “What is important is to figure out what kind of chemical reaction the religious teachings produce when applied in our daily lives. How does that impact you and your environment? Sometimes militant Islamists use this religious power to indoctrinate their followers to turn to violence to achieve their political goals.”

An Iraqi refugee, speaking to Al-Monitor on condition of anonymity, said he and others hear that there are many Turks joining the ranks of IS militants. “We especially hear about hundreds of Turks from Konya joining them,” he told Al-Monitor. “There are also others from other places, but you all need to know that there is flow in that direction that is going to keep us on fire for a long time and this is going to burn us all in this region. The Sunni [Iraqi] tribes joined them to express their reaction of being isolated, but this has become something else. This is a monster that is cruel and merciless.” The New York Times reported Sept. 16 that IS recruited hundreds from even the country’s capital, Ankara.

Although Erdogan accused foreign media of maliciously picturing Turkey as supporting the Islamic State, the Turkish media have started to report interviews with families whose members have joined IS. The daily Haberturk had an exclusive interview with a retired imam from Konya who asked to remain anonymous. The imam’s son joined IS, and his father tracked him for 21 days and brought him home. “Hundreds of young men from Konya have joined IS to fight with them,” he said Sept. 30. “Many died. There is a recruitment operation here conducted by a group that pays their debts and pays money to the families.”

The security directorate in Konya denied the allegations and said the numbers were exaggerated. Turkish security officials contend that the overall numbers of Turks joining IS are exaggerated. Burhan Kuzu, a ruling Justice and Development Party (AKP) deputy from Istanbul and a constitutional committee chairman in parliament, also downplayed the problem, tweeting Oct. 1: “20% of IS members are Harvard graduates. Many have Ph.D. and masters degrees. That means even education did not prevent them from becoming terrorists. It’s important to give them the right religious education.”

Yet the rumors remain endless about Turks joining IS, and many in rural areas of Turkey express concern that their sons and daughters will become the victims of these groups. On that point, Ergil urges that the government approach this issue with more seriousness, starting with providing people accurate information, as it is unsubstantiated to claim 20% of IS militants are Harvard graduates.

“Political Islam first makes them take revenge on all those who prevented them [from having] the kind of life they believe they should have,” Ergil told Al-Monitor. “Their next step will be to rebuke the established laws and start advocating that the Quran says this and that, and therefore the law should be as such.”