Are Turkey's young IS recruits now a domestic threat?

Young Turks are increasingly attracted to the Islamic State's radical doctrines, believing their own country's brand of political Islam to be superficial, yet the Turkish government remains unconcerned with the increasing radicalization. 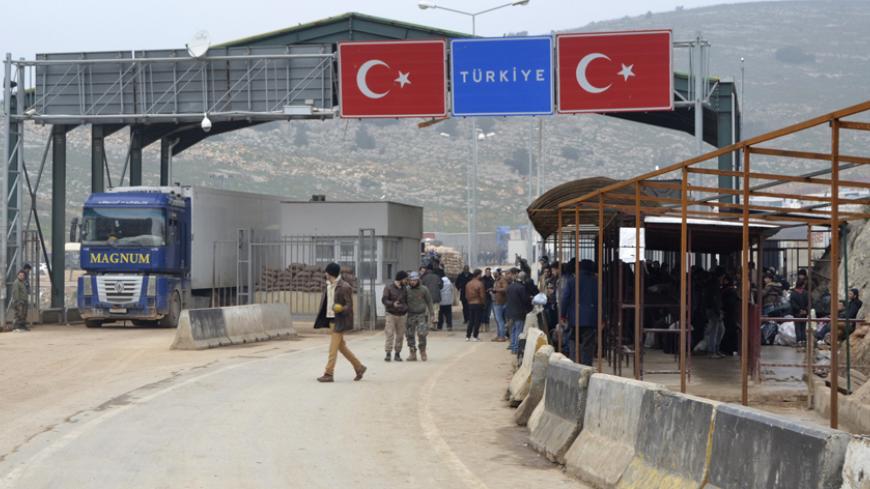 Syrians wait at a checkpoint at the Syrian border crossing of Bab al-Hawa on the Syrian-Turkish border in Idlib governorate, Jan. 21, 2015. - REUTERS/Abed Kontar

Turkish media extensively covered the story of 19-year-old Suleyman Bengi crossing the border to Syria and joining the Islamic State (IS). Suleyman, a freshman dentistry student at a prominent Ankara university and son of an academic, took along with him his 16-year-old twin brothers Dilar and Dilsat. Everyone is asking what could have motivated a young man from a well-to-do, educated family to embark on such an adventure.

Suleyman’s family lives in Diyarbakir in southeast Turkey. His father is a faculty member of Dicle University's mining engineering department. His mother is a civil servant. Their financial situation is comfortable.

Al-Monitor spoke with Suleyman's friends at the student hostel in Ankara’s Cebeci district where he lived. We learned that when Suleyman arrived at the hostel a year ago, he was already devoutly religious and prayed regularly. Suleyman's hostel mates described him as a loner who appeared to not want to be friends with anyone and never participated in common activities. They said they noticed a change in Suleyman after he began to visit a bookshop in the Cebeci district. He then started lifting weights in the hostel gym. One time, he told the others in the gym to play religious hymns, not music, and actually started a fight over it. His clothing style also changed. He tried to take some of his friends to the bookshop but couldn’t persuade them.

A hostel mate said, “This was his first year. If his parents had been with him, they could have noticed the change in him.”

When Al-Monitor asked why they didn’t report the changes they observed in Suleyman to the hostel management or his professors, they replied: “We actually noticed the change in Suleyman. But we didn’t know who to report to. There is no phone number, no expert or an office that could help us.”

Suleyman kept in close contact via social media with his twin brothers, Dilar and Dilsat, who attended different high schools in Diyarbakir. It is likely that Suleyman radicalized his brothers through their social media correspondence and persuaded them to go to Syria. Schoolmates of the twins said they were good students but that they kept to themselves.

Upon hearing that his three sons had gone to Syria to join IS, M. Sefik said, "We taught them how to love people. How they came to this point is a mystery to us."

Hundreds of mothers and fathers in Turkey are speaking those very words. According to official figures, about 2,500 individuals have traveled from Turkey to Iraq and Syria to join IS. About 800 even took their families with them. According to security experts Al-Monitor spoke to in Ankara, the reality on the ground is much more worrisome. One source, who did not want to be identified, said 5,000 Turks have crossed. Another source said, "The real problem is not the ones who go to Syria and Iraq to fight, but those who are radicalized and stay here. They [number] in the thousands.”

What is the dynamic that leads Turkish youth to follow Salafist currents? One explanation is political. A leading ideologue of the political Islamic movement in Turkey spoke with Al-Monitor on the issue, preferring to remain anonymous out of fear of possible pressure. He said that the ruling Justice and Development Party (AKP) polluted political Islam and turned it into a current that cannot be questioned. The new generation of Islamist youth turn to Salafist currents because it gives them the power of protest.

The source pointed out that his choosing to remain anonymous is indicative of how the government has disfigured the country's Islamist movements. He said, "There is no reasonable criticism of Islam within the AKP government. Their relations with the masses are not democratic." He then made an important point: "These youngsters are not going to IS as a reaction to secularists in Turkey. To the contrary, they see how political Islam in Turkey is decayed and not honest. IS promises these kids authentic, honest comradeship. Islamist youth in Turkey have a problem expressing themselves. They have to find a way to join society. It is this reaction that makes IS attractive to these youngsters."

Professor Clark McCauley of Bryn Mawr College in the United States, who studies political radicalization, told Al-Monitor via email that he believes that “the first thing to notice is the blend of motives, in which emotion and personal circumstances are as important as political opinion about IS.”

McCauley highlighted that some personal factors can be categorized as mechanisms of radicalization, including those identified by himself and Sophia Moskalenko:

Professor Hilmi Demir of Hitit University's Faculty of Theology told Al-Monitor during a meeting in Ankara that IS offers many things to youths who can’t find a place for themselves in society: a religious perspective, a sense of belonging, brotherhood, respect and reputation. The group makes them heroes by offering martyrdom. In addition to offering a pure society free of misbehavior, IS provides its fighters housing, a salary and even marriage assistance.

Demir said, "In Turkey, we don’t pay much attention to the radicalization process. Turkey focuses on identifying radicalized individuals or preventing the crossing of borders. We don’t wonder how they were radicalized but rather want to find who is using them. We ignore that there can be no radicalized action without religious and ideological radicalization." Demir concluded by warning, “Today there is a very strong Salafist network that nourishes radicalism against traditional Sunni schools of thought. Any youngster caught in the indoctrination of that network ends up in IS. We must attach priority to develop mechanisms that will combat this religious-ideological doctrine. Unfortunately, I am not very optimistic about it.”

Turkish politicians have been noticeably quiet on the issue of Turks joining IS. As a result, the security apparatus is not concerned with IS recruitment centers and Turks who may be joining IS. Al-Monitor spoke to security officials in Ankara who say that Turkey doesn’t have a strategic vision for combating IS. Joining IS is not considered a crime, and the bookshops and associations that operate as IS recruitment fronts, although known by security forces, are not shut down.

As a result, society is unaware of and the media pay little attention to the hundreds of youths under the influence of Salafist currents who are trying to get to Syria and Iraq to join IS. Politicians don’t have a strategic vision to combat this vital threat. The security bureaucracy is confused and practically immobile. Today, the prevailing notion is “let there first be an incident, then we will take care of it.”