Is the Islamic State planning a cyber-caliphate?

Under pressure on the battlefield, IS has been moving its caliphate to the virtual world and is targeting Turkey in particular. 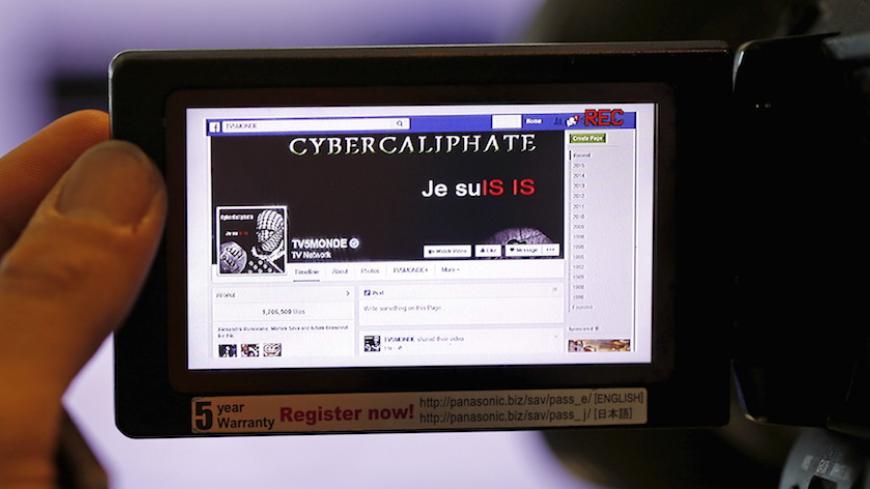 A print screen of the hacked Facebook page of French television network TV5Monde is seen on a camera viewer in Paris, April 9, 2015. - REUTERS/Christian Hartmann

Judging from the Islamic State's (IS) losses of territory and revenue in Iraq and Syria, IS is coming under more pressure by the day. If the losses continue at this pace, many observers think 2016 could well be the final year of IS in these two countries.

It seems IS decision-makers see this reality and are turning to the fertile recruiting grounds in Turkey, as indicated by the surge in IS output on social media. It is obvious from its propaganda strategy that IS first wants to conquer the cyberworld, and then — with the virtual caliphate — it will set up there and capture hearts and minds in Turkey.

An IS propaganda video professionally produced in Turkish and released in November was viewed more than 100,000 times on social media platforms such as YouTube, Facebook and others. Quoting extensively from the Quran, it calls on IS sympathizers to migrate with their families to Islamic countries such as Iraq and Syria. But in recent days there has been a significant change in the themes of Turkish-language, pro-IS social media and commentary sites. The Turkish versions now say, “You can serve the Islamic State where you are.”

For example, under Twitter hashtags such as #IslamDevleti and #HilafetTR, IS has been saying that the religion in Turkey today is not the Islam of Mecca. It is instead “a democratic religion bereft of jihad as decided by its parliament and approved by the USA. This religion cannot be called Islam. We reject it.”

The comments now emphasize that the struggle with the democratic order in Turkey has priority over migration.

Despite all countermeasures of the state, there has been a substantial rise in the number of social media sites, accounts and commentary blogs that demonize Turkey's secular education system, reject democracy and the constitution, harshly criticize the dominant traditional religious communities and their spiritual narratives and thrash compulsory military service.

Reyhan Guner of Bilkent University, who researches cybersecurity, confirmed a visible increase in the Turkish-language content of IS cybermedia. She said this is easily measured. “For example, you can notice two basic elements. The first is the sympathy IS has been accumulating among anti-PKK [Kurdistan Workers Party] religious groups in Turkey because of the battles between IS and PKK/PYD [Democratic Union Party] Kurds. The second is the sympathy generated in religious-nationalist circles for the armed struggle waged against global forces in Syria,” Guner told Al-Monitor.

These two currents of sympathy have made IS a center attraction in daily political debates in Turkey. Guner says IS has been following a clever strategy in its Turkish-language output. “It is interesting to note how IS focuses its Turkish propaganda on new adherents or sympathizers of IS. There are scores of IS people, originating from economically deprived parts of Turkey, posting photographs of luxury villas and fancy cars they claim to own after joining IS because they have gotten their hands on what they call ‘war booty.’ Through such messages, they want to motivate their relatives, friends and others who are unhappy with their current circumstances to join IS,” she said.

IS is thus exploiting not only the ideological but also socio-economic fault lines of Turkey.

Guner notes that IS, in addition to its online propaganda journals such as “Conquest of Konstantiniyye,” is using debate forums in Turkish to enable easy access to comments and decrees from IS. In these publications, profound ideological debates have overtaken the former emphasis on execution visuals. For example, a blog run by Twitter account @Tevhidmedya calls for “Islamic resistance” because all officials of Turkey's democratic political structure are “infidels” and those who follow them will be the same.

Another interesting feature of extremist Salafi social media platforms that call for jihad in Turkey is how content can be confusing when the same page contains accolades about IS along with messages of praise for other jihadi bodies. For example, after IS shot down a Russian Mi-25 assault helicopter July 10 near Palmyra, one Twitter account lauded the action as a military victory. But at the same time, it was also praising the Eid al-Fitr celebrations of Jabhat al-Nusra, which is actually combating IS. Another account presents reports from Amak news agency that offer information about IS in Turkish, along with information about Ahrar al-Sham, a key group among anti-IS moderate organizations in Syria.

Here, Turkey must recognize a critical reality. When the issue is jihadis in Syria and their military accomplishments, Salafi sympathizers in Turkey do not distinguish between IS and other armed Salafists. For Turkey, the line between IS and other Salafi armed groups is becoming more blurred by the day. This could pave the way for armed Salafists in Turkey to adopt IS ways.

The question one must ask here is, does Turkey have an adequate strategy to cope with the increasing number of Turkish-language messages of IS and other extremist Salafists? Does Ankara have a strategic vision of how to battle Salafi currents in cyberspace? Guner believes Turkish politicians and the public are not really aware of the potential dangers of radicalization, terrorism and cyberterrorism prevailing in the virtual world.

“Sadly, in Turkey the concept of cybersecurity is limited to not using "12345" as your email password and not allowing children to view IS execution videos. In our schools we have introduced the use of tablets, but we don’t have a cybersecurity class to teach children the dangers they may encounter on the internet. It is just a matter of time before you find yourself in a debate forum of an illegal organization just by clicking on an advertisement that appears on the same page with your usual traditional news or comment site,” Guner said.

Guner worries that Ankara still doesn’t have a comprehensive cybersecurity mindset, one that says leaders must protect both government and personal internet users. She strongly recommends that Turkey and other Muslim countries in the region launch a diplomacy initiative to collectively fight radicalization in cyberspace.

To sum up, while IS is losing territory, it is trying to compensate by setting up its caliphate in cyberspace. One has to wonder whether the next IS phase will be to join efforts with other ideologically related bodies, courtesy of the capabilities offered online.

At this moment, we can only hope that there are some brains in Ankara searching for ways to deal with IS cyberspace operations.