Following a Turkish-American deal allowing US warplanes to use Incirlik Air Base in the fight against the Islamic State, the terrorist group has lashed out at the ruling AKP government. 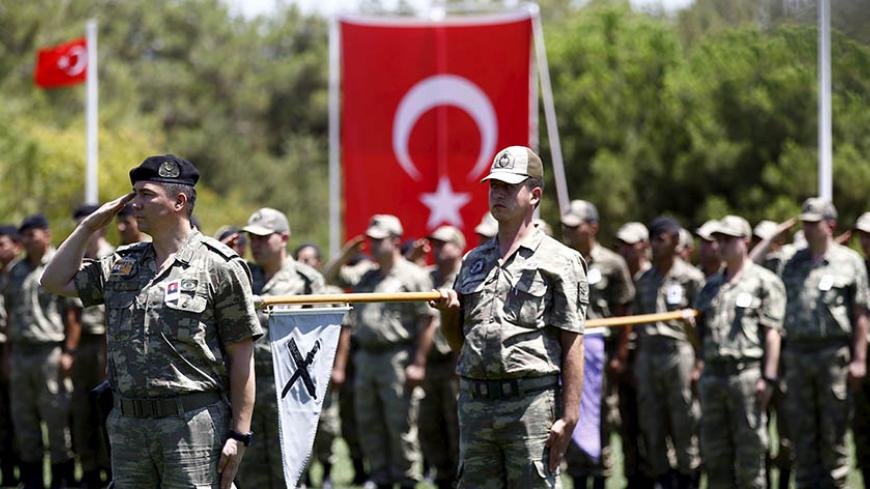 Turkish soldiers stand at attention during a ceremony for their comrade Mehmet Yalcin Nane, who was killed by Islamic State militants, at a military base in Gaziantep, Turkey, July 24, 2015. - REUTERS/Murad Sezer

How exactly Turkey sees the Islamic State (IS) has long been a bone of contention among both Turks and Turkey observers. The Justice and Development Party (AKP) government claims it never supported IS and has condemned it as a terror group from the beginning. Others accuse the government of President Recep Tayyip Erdogan being too lenient on IS, at least until recently, saying the AKP saw IS as a bulwark against Kurdish gains in Syria. More heated voices in the Turkish opposition, including the pro-Kurdish Peoples’ Democratic Party (HDP), even blame the AKP government for creating, arming and using IS for its own ends.

Much less attention is given, however, to how IS sees Turkey and the AKP. But IS wants to be heard on this, and on its Turkish-language website, online magazines and Twitter accounts, repeatedly condemns Turkish leaders as nothing but a flock of “apostates.” It also warns that the Turkish people will be soon punished for the attack on IS by “Erdogan the devil.”

The IS website in question is called Darul Hilafe, which means "Land of the Caliphate." It was hosted on the domain DarulHilafe.com but was blocked by Turkish authorities in July, along with a few other jihadist websites. The site was reopened quickly on the domain DarulHilafe.net, which was still up when this article was written. It is, of course, worth asking why the Turkish system, which can be very quick to block websites when the highest authorities are personally disturbed, is sluggish when it comes to other matters.

An Aug. 8 entry on Darul Hilafe addressed Turkish Prime Minister Ahmet Davutoglu, or “the little devil.” (The term "tagut," which is used in the Quran to refer to the metaphysical devil, is common in Islamist parlance for despised political figures.) The sarcastic article condemned Davutoglu for trying to threaten IS by visiting a Turkish military post near the Syrian border. It also ridiculed Davutoglu for appearing among other world leaders, or taguts, at the Paris march held after the Charlie Hebdo massacre — an act IS, of course, praises.

While Davutoglu is the "little devil" in the eyes of IS, the big one is Erdogan. An entry dated Aug. 7 accuses “Tagut Erdogan” of trying to brainwash Turkish society through his media machine to favor an alliance with the “infidel state America” by allowing the US military base at Incirlik to be used against IS. The article also presents the move as a big boost to the Kurdistan Workers Party (PKK), which is designated as a terrorist group by both the Turkish and US governments. According to the article, Erdogan is making a mistake by allying with the PKK against IS, “which has not yet shot a single bullet at a Turkish soldier.” The subtext is that after the US-Turkish deal on the use of Incirlik, IS could move on to a "no more Mr. Nice Guy" phase toward Turkey.

This threat is made more clearly on Twitter, where IS Turkey has a current account: @DarulHilafe6. An Aug. 5 tweet read, “Oh people of Turkey, don’t allow the devil Erdogan to get you killed. Don’t forget that you will pay the price.” Other tweets explained that “the lions of the caliphate” were ready to hit Turkey with “martyrdom trucks” that were ready to “explode anytime.”

IS condemns Turkey for allying itself with the PKK. One Darul Hilafe article even defines the PKK as an “Erdogan-fed atheist gang.” It is a bit ironic that at the same time, the PKK and HDP condemn Erdogan for supporting IS against them. The Turkish government is caught in the crossfire between IS and the PKK.

In addition to such daily “news” and commentaries, IS also publishes online magazines that offer more theoretical arguments to Turkish readers. One of them is conspicuously titled "Konstantiniye’nin Fethi" ("Conquest of Constantinople"). In its first issue in June, it quoted a famous saying by the Prophet Muhammad on the blessed army that would conquer Constantinople — meaning, of course, IS. A poem in the same issue read, “Oh Istanbul, you have allowed disbelief in your avenues. You have filled your streets with sins, but surely you will be conquered. You will bow down to the 'takbirs' [declarations of God’s unity].”

The same issue includes an article explaining what apostasy is in Islam, and declaring that all Shiites and Alevis are apostates that need to be executed (and discusses, chillingly, whether their children should be spared). Meanwhile, democracy is condemned as an alternative “religion” to Islam, and those who accept a democratic regime are considered polytheists. Then the magazine vows, “Oh democrats, we will fight against you until there is no democrat left on Earth. You will either all return to the religion of Allah, or with Allah’s help we will put all of you to the sword.”

With such an excommunication of democracy, Turkey, which is one (imperfect though it is), is clearly enemy territory for IS. No wonder Konstantiniye’nin Fethi considers meat from animals slaughtered in Turkey unclean. In Islamic law, meat slaughtered by infidels is considered unclean, similarly to the kosher laws in Orthodox Judaism.

The second issue of Konstantiniye’nin Fethi, also released in July, takes the definition of apostasy further to include “those who fight the state of the caliphate.” Erdogan is listed among such apostates. In another article, headlined "Erdogan’s Kurdish State," the magazine again condemns the Turkish government for supporting the “atheist gang,” referring to the PKK. This “gang,” the article adds, “spreads the lie that Erdogan supports the Islamic State, only to ask for more support for itself.”

All in all, it is very clear that IS sees the Turkish government, no matter how “Islamist” it may be in secular eyes, as one of the eternal devils it is destined to fight. Despite this, until recently, a live-and-let-live attitude may have defined the relation between the “caliphate” and Ankara, as each side, occupied with other priorities, did not wish to provoke the other. Yet the July 20 suicide bombing in Suruc that killed 33 Turkish citizens made Ankara more alert against IS, and hence came the decision to open the Incirlik Air Base for strikes against IS. In return, IS now seems to be more on guard against Turkey, adding to the already tense situation in Turkey over to the derailment of the peace process with the PKK.