Is Erdogan afraid of poking the IS bear?

Turkish President Recep Tayyip Erdogan has done little to censor the latest Islamic State video criticizing his government; does this mean that the ruling AKP could stand to benefit from publicizing the threat posed by the group? 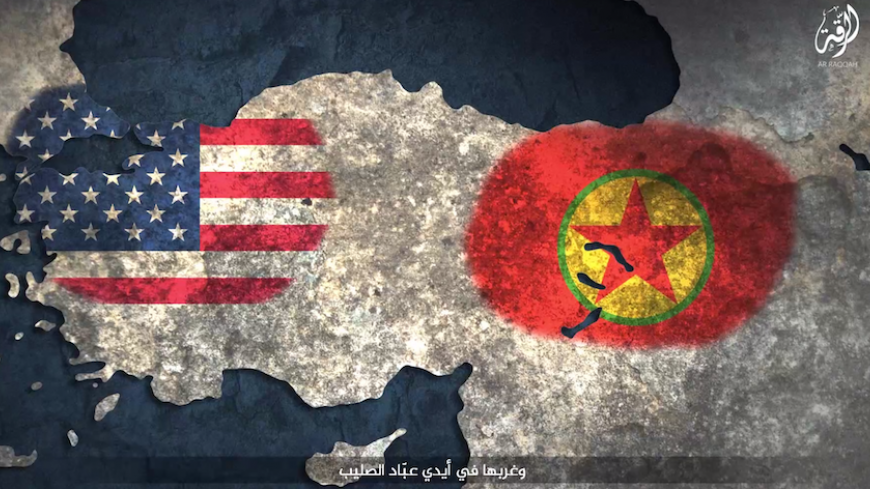 Screenshot of an Islamic State video titled "A Message to Turkey." The subtitling reads "Western [Turkey] is in the hands of the cross worshippers." - YOUTUBE/kamal toufik kamatcho

On Aug. 17, news broke that the Islamic State (IS) released a video threatening Turkish President Recep Tayyip Erdogan. In the seven-minute video, three men with rifles sit cross-legged in rocky terrain. Only the one with the graying beard, known by the alias Abu Ammar, speaks in fluent Turkish, with carefully repeated Arabic sayings spread throughout the message.

Unlike other IS videos, this one has an amateur feel. The video focuses on Erdogan exclusively, with photos of the Turkish parliament “as a sign of going against God’s laws” and Erdogan meeting with US President Barack Obama at the White House. Abu Ammar charges that Erdogan failed to rule with Sharia (Islamic law) and went along with “Americans, Jews, crusaders, the atheist PKK [Kurdistan Workers Party] as well as the Free Syrian Army and Saudis.” Intriguingly, Abu Ammar labels Free Syrian Army members as friends of the founder of modern Turkey, Mustafa Kemal Ataturk. The video continues to explain how the apostate Erdogan sold Turkey to the PKK and crusaders. By cooperating with the PKK, the Free Syrian Army and the Americans, Abu Ammar argues, Erdogan has paved the way for the massacre of Muslims of Damascus and sold out the holy values of all Muslims. He echoes the Turkish opposition stance that Erdogan continued on the road of servitude to the Americans in order to stay in power.

Halfway through the video, as a map of Turkey appears, two flags divide over the country. In the west is the US flag, and the PKK takes over the eastern parts. Asserting that this warning is his religious duty, Abu Ammar asks the people of Turkey to rebel against these forces. First, they are to repent. They are to deny foreign concepts such as democracy, secularism, civil laws, nationalism and any non-Islamic terms until their war becomes the holy jihad and their dead become the martyrs. Making only one reference to Quranic verses, the IS sheikh says, “Fight against the allies of Satan [evil], as the order of evil is weak.” (Quran 4:76) He then calls upon believers in Turkey to help IS anywhere, as much as they can, and rush to join the caliphate fighting the evil.

Following the video's release, daily Vatan reported that Abu Ammar was actually a 47-year-old Turkish citizen, Fatih Acipayam, from the city of Bursa. Acipayam had sold his bakery to allegedly join IS in Syria, along with his wife and four children.

The Turkish IS video, although it uses the name of Caliph Abu Bakr al-Baghdadi, is allegedly recorded without the approval of the caliph; it is not an official release. Even though the video conforms to the basic rules of dress, rifles and unidentified background, it still lacks the meticulous use of language that we are used to hearing in IS videos. It also does not adhere to the fastidious dedication of IS' own Islamic law. Despite the call to conquer Istanbul, the video also lacks the extravagant graphics and Hollywood-style soundtrack most IS videos have.

This is not the first time IS has threatened Turkey via video. But the differences are clear between this video and one from October 2014. In the Arabic video from October, we hear IS threatening Turkey against joining the US-led coalition and promising that Erdogan’s leadership will end in the hands of IS. When the caliphate was declared on the first day of Ramadan in 2014, Baghdadi had promised the conquest of Istanbul, and the IS online Turkish magazine named Istanbul (Konstantiniyye) repeated that warning.

There have been a multitude of allegations that different segments of the Turkish government, from the armed forces to the intelligence services, have relationships with IS. There are several studies focusing on how IS affects the daily lives of Turks, from cancellation of traditional Alevi festivals to understanding why Turkish families join IS. Yet, the Turkish video reveals less-discussed features of the IS reality in Turkey. First, a significant number of Turks do not take the video threats of IS seriously. Second, Erdogan and the Justice and Development Party (AKP) elites view the IS threat more seriously behind closed doors than is reflected in the media.

Al-Monitor asked members of the opposition about the Turkish video. It was interesting to find that both pro-Kurdish and ultranationalist movement elites concurred the video is not to be taken seriously, indicating it most likely was released to aid Erdogan and his AKP. It is particularly peculiar that while the Turkish state has a reputation of promptly shutting down controversial websites, the IS video in Turkish could be accessed freely in Turkey. One seasoned parliamentarian told Al-Monitor, “All mainstream media headlines are sanctioned by the AKP elites. That is why you will not hear Erdogan or other AKP bigwigs crying foul against IS. This is one threat that is real, and the more vocal it can be, the better it is for the AKP. They can keep increasing gag orders on all of us in the name of national security. It is their useful monster.”

When we take a quick look on social media on the days following the release of the video, we see that Turkish viewers were in a sarcastic, "so-what" mood. Here are a few examples:

“So IS has called for the conquest of Istanbul. But IS, do not come during rush hour, all public transportation is packed already!”

“IS stay put where you are! The weather is too hot. Come when it cools off a bit.”

“Here is the purported IS message: When we checked out Istanbul’s housing market, we gave up on the conquest.”

“Oo yes, come on IS guys, also Hezbollah, Boko Haram and al-Qaeda, all should come to Istanbul, we can create a special atmosphere!”

“IS’ first comments after the conquest of Istanbul will be ‘What is up with these gas prices?’”

So what do the AKP’s top echelons think about the IS threat? Al-Monitor interviewed three high-level security bureaucrats. One retired two-star general told Al-Monitor, “The state fears IS much more than the PKK or other left-wing militant groups. The PKK and others are local; they are the devil we know. Yet IS is unpredictable. We can decode the intelligence gathered on the PKK or other local militant groups, but for IS, even if we gather information, making sense of it is a tedious process.”

A senior bureaucrat concurred with the general and added, “We should avoid direct verbal attacks toward IS or its values because it will backfire on us. The jihadi networks have sleeper cells, and military methods alone are not sufficient to eliminate these groups. Every government in the Middle East knows you cannot ignore these nonstate actors, but you cannot form alliances with them either.” When asked about why these concerns are not reflected in the media, a senior bureaucrat told Al-Monitor, “Turkey went through a stormy election campaign, and we are entering into another. So the news will focus on what matters: It is the PKK. However, behind closed doors we have an unwavering policy against IS and all other terror organizations. We have dedicated serious numbers of trained men to gather and analyze information [and] established a universal database. It is not perfect, but we are committed to battle terror despite all rumors.”

Yet, there are no specific answers explaining what Turkey is doing to curtail IS funding. The answers were too general and vague about international regulations and rules to report about the specific measures.

All things considered, the relationship the AKP has with IS is complicated, but it would be ignorant and unfair to claim AKP is aiding IS.