Pro-Islamic State groups ramp up their propaganda in Turkey and issue their first online periodical. 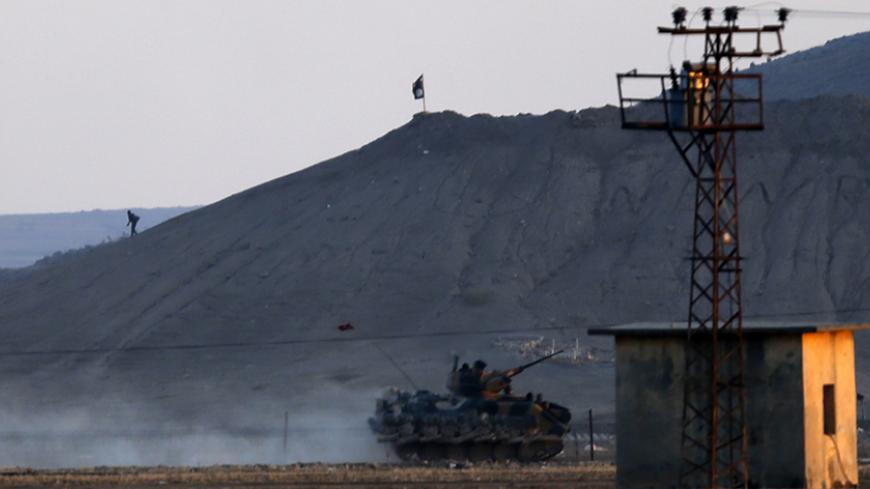 An Islamic State fighter walks near a black flag belonging to the Islamic State as a Turkish army vehicle takes position near the Syrian town of Kobani, as pictured from the Turkish-Syrian border near the southeastern town of Suruc, Sanliurfa province, Oct. 7, 2014. - REUTERS/Umit Bektas

Pro-Islamic State (IS) groups have issued their first online periodical in Turkish. Believed to be designed by veteran IS digital experts at Al-Hayat Media Center, which is known for its highly professional work, the periodical launched its first edition last week, titled "Konstantiniyye" — referring to Constantinople, Istanbul’s name before its conquest by the Ottoman army.

The main theme of the first issue is the conquest of Konstantiniyye, as it coincides with the anniversary of the conquest of Istanbul on May 29, 1453. The unsigned lead editorial explains that the periodical is published because of a “lack of access for Turkish people, especially Muslims, to news, articles and videos that are published in the Islamic State.”

The first article is about the city's conquest. The article states that although the city was conquered by Ottoman Sultan Mehmet II on May 29, 1453, Konstantiniyye was not really conquered; it has to be conquered again, this time by the "armies of Islam." The article begins with the Prophet Muhammad extolling the importance of Istanbul. The strategic vision of IS for Istanbul is inspired by the hadiths (the prophet’s sayings), especially the one that predicts that the Islamic armies will first engage the Romans in a major war at Aleppo, close to the Day of Judgment; following that war they will go to Konstantiniyye to conquer it "without arms."

The article ends by stating, “As you will understand from these hadiths, this city now called Istanbul will be conquered without weapons and without bloodshed — only with chants of 'God is great.' The new army of the caliphate, rebuilt as ordained by the prophet, with God’s blessing, will thus capture the city.”

The articles in this first issue, in general, do not advocate violence against Turkey. This may be interpreted as IS refraining from declaring Turkey as an enemy, at least for the time being. It is not clear whether this attitude reflects their opinion of the ruling Justice and Development Party (AKP).

Why such a careful attitude toward Turkey? The answer to this question can be found in another article, titled "Immigration." The message in that article implies that IS does not see Turkey as a battlefield but as a rich source of human resources. All Muslims of Turkey, in particular those in the fields of engineering, health care, education and the military, are invited to emigrate to the Islamic State. Hence, it becomes clear that capturing and holding on to territory is important in the strategic narrative of IS.

A poem that promises the conquest of Istanbul with chants of God’s greatness is seen as a way of praising the glory of the Ottomans, making one wonder whether there is some strategic reason behind it and whether IS is trying to assume the label of "protector of the Sunni world," against Iranian expansionism. If so, then it would mean a radical shift in the strategic vision of IS. The ambition to take over the role of the Ottoman Empire by challenging the nearby enemy of Iran and Shiite expansionism, and the distant enemy of the West and its values, suggest that IS has global aspirations.

It is possible to interpret the article titled "Who is an Apostate?” as a discreet threat to political decision-makers in Turkey, particularly the AKP elites. The basic message to the AKP in this article is that "if you don’t mess with us, we will not mess with you as long as you don’t become apostates." IS here openly warns the AKP that if it takes action against IS, those involved will be declared apostates and their legitimacy will be questioned in front of the Sunni world.

The article "Democracy on Fire," accompanied by a photo of coffins of US soldiers wrapped in US flags, without a doubt reflects IS' perception of democracy as the worst enemy. The article explains, "Democracy can never be compatible with Islam. These are two different religions. No other religion and ideology is compatible with Islam. You cannot add a qualifier to a Muslim. There cannot be a democratic Muslim, communist Muslim, socialist Muslim, Jewish Muslim or Buddhist Muslim. This calls for the Islamic world and Turkey to fight against democracy.” The article is perceived as a reaction to the Kurdish radical Islamist Huda-Par (Free Cause Party). Pro-IS thinkers in Turkey are thus saying the recent elections are not legitimate in their eyes while trying to attract the Huda-Par voters to its ranks.

However, the IS periodical does not include any distinctly anti-Kurdish articles and visual material, apart from challenging Huda-Par. This indicates that radical Islamist Kurds in Turkey constitute for IS a major source of manpower, and that IS is focused on attracting Islamist Kurdish youths.

The article "After Blowing Up the White House, We Want Paris” is a collection of stiff messages to Europe and the United States. After stating that the Kobani resistance of the Kurds succeeded with the efforts of the coalition forces under US leadership, the article resorts to sarcasm: "Congratulations, Pentagon. May the Crusaders enjoy the rubble at Kobani … If you are dreaming of Mosul, Tikrit, Shengal and a piece of a forest in Nigeria we will make your life miserable and blow up your White House, Big Ben and Eiffel Tower.”

From this first online periodical in Turkish, one can conclude — at least for the time being — that IS does not see Turkey as a battlefield, and that Turkey will not be conquered with weapons. Hence, IS is expected to continue to appeal primarily to the hearts and minds of Kurdish youths. The publication also makes it clear — with its message, “We are the soldiers of the mission declared by the prophet" — that there is strong emphasis on Aleppo and the prophet’s visions.

For the first time, we see how closely IS is monitoring the changes in political Islam in Turkey, and how it is looking for a place for itself in that transformation. There is no doubt that Turkish Islamism represented by the AKP has been tarnished with corruption allegations. IS appears to be fusing its ideology with Islamism and Ottomanism in Turkey to create a new radical Islamist school of thought there that could motivate the Islamist masses already disengaged from socio-economic life and democracy closer to IS.

That IS has a long-term strategic vision for Turkey is the most important message the periodical is sending. It emphasizes the popular-centric approach aimed at winning the hearts and minds of Turks, instead of armed violence and terror; hence the call to conquer Istanbul not with weapons but with Islamist spiritual action.