The Syrian opposition wants to know what kind of support it can expect from the AKP government after the AKP won solid support in the recent election. 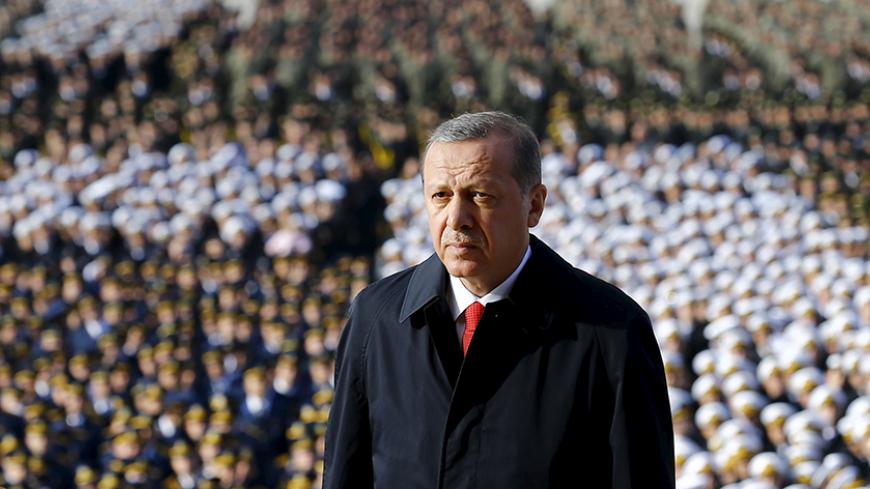 Turkey's Justice and Development Party (AKP) elite weren't the only ones ecstatic with the party’s 49% victory in the Nov. 1 elections. Some foreign elements also were captivated by the result: AKP's revival as a strong, single-party ruler that could also lead Turkey to a presidential ruling system.

Among the most pleased are the "moderate jihadis" of Syria who are fighting the regime of President Bashar al-Assad and the Islamic State (IS). As I stressed in an Al-Monitor article Oct. 26, these groups, which are receiving support and protection from Turkey, have been going through rough times of late with Russia's intervention and high-paced joint operations with the Syrian army. The AKP's electoral success has improved the groups' morale.

But first, an explanation is in order. From the reactions to my previous article, I understand there is a growing trend to put "moderate jihadis” in the same terror category as IS. Actually, most of the moderate jihadi groups see IS as a foreign element imposed on the Sunni world. Perhaps we should define the moderate jihadi, who has some basic differences from an IS jihadi.

While the Free Syrian Army congratulated Turkish President Recep Tayyip Erdogan on his party's success in the elections, the multifaction Army of Conquest issued a declaration noting Erdogan and the AKP government have never abandoned their support of the Syrian revolution, despite domestic and foreign pressure and have constantly followed an ethical policy.

“We are ardently awaiting the day of Assad's collapse and the building of brotherhood bridges between the people of Turkey and Syrians,” the declaration said.

Khaled Khoja, chairman of the National Coalition for Syrian Revolutionary and Opposition Forces, also congratulated AKP chairman and Prime Minister Ahmet Davutoglu for the victory. “We hope it will bring stability and welfare to Turkey and to the Islamic world,” Khoja said in a written statement.

The Syrian branch of the Muslim Brotherhood, in a statement released over social media, congratulated the AKP and Turkish people for their democratic struggle and thanked Turkey for standing by the Syrian people.

Congratulation messages from some 15 opposition groups had two joint themes: They did not forget to emphasize Erdogan's role and they believe the AKP success bodes well for stability in the region.

According to journalist Levent Tok, who closely monitors Syria, these opposition groups believe the stagnation that prevailed between the June 7 and Nov. 1 elections has ended.

“Really, Turkey had become nonexistent in Syria for the past six months. In that period we saw the Russian military intervention. Today, Syria is effectively divided into spheres of American and Russian influence. This is why the opposition groups see Turkey as a stabilizing third-party element precisely at this time,” Tok told Al-Monitor.

Tok, who noted that Syrians appreciate the AKP for taking in refugees, thinks opposition groups now feel confident that the AKP's benevolence will continue. He also said that direct references to Erdogan and personal salutations to him indicate the Syrian opposition considers Erdogan the true winner of the elections.

But are the moderate jihadis part of the problem or the solution? Tok has an interesting response to this question: “We only speak of the combat capacity of the opposition groups. Nobody looks at their political capacity. To prevent them from moving closer to IS, it would be useful to allow them roles in the political negotiations. Today, [many] of these groups are trying to sign nonhostility pacts with IS. For example, many groups such as Jund al-Aqsa say that for them to fight IS, first IS must attack them. Their anger and resentment of IS and Russia are not different.”

But at the end of the day, their anger toward Assad and Russia can outweigh their resentment of IS, even if they don’t subscribe to the IS mindset.

Can "moderates" represent Turkey in the Syrian proxy war?

It is clear that the AKP government attaches a high priority to combating the Kurdistan Workers Party (PKK) and the Democratic Union Party (PYD), as Turkey considers the latter to be the Syrian extension of the PKK. Officials made their position clear in a communique issued after a post-election security summit Nov. 4 in Ankara, convened by Erdogan and Davutoglu.

It wasn't hard to surmise Turkish Foreign Minister Feridun Sinirlioglu's top concern when he visited Erbil in Iraqi Kurdistan recently. It was his first foreign trip after the election, and he wanted to address the joint struggle of Turkey and the Kurdistan Regional Government against the PKK.

Turkey will probably want to use the moderate jihadis to prevent PYD forces from crossing into Turkey west of the Euphrates River. There have been claims that these jihadis might even initiate action against the PYD on their own to gain Turkey's favor.

In a recent interview with Turkey’s official Anatolian News Agency, Muhammed Bazarbashi, leader of the Army of Damascus, alluded several times to his group's willingness to work with Turkey against the PKK/PYD. The Army of Damascus has 3,000 fighters north of Aleppo, he said.

In short, Turkey supports a collection of moderate jihadi groups that have substantial power in Syria and whose real target is the Assad regime. The regime and Russia are hitting these groups instead of fighting IS. These groups believe that although Turkey may become more active in the struggle now that the elections are over, the United States is still confused and wavering.

Will the United States subscribe to the Russian theory that there can be no moderate jihadis, or will they continue to support these groups discreetly via Turkey? Washington is undecided.

These groups have stepped up their expectations for more support from Turkey. Ankara can guide these groups to a more dedicated war against the Assad regime despite the risk of confrontation with Russia, encourage them to fight the PYD or, by focusing on a negotiation process, encourage these groups to integrate politically with other groups.

The AKP government's choice from among these options will show us whether Ankara still wants the civil war in Syria to continue or if it has decided it is time for a political transition.

Finally, the field reality in Syria poses one key question: Should Turkey distinguish between IS violence and moderate jihadi violence? My answer is yes. I believe this has to be done. To put both groups in the same category would be like locking up a zombie and a normal person in the same prison cell — we would end up with two zombies.