Would you like your terror straight up or as a cocktail? 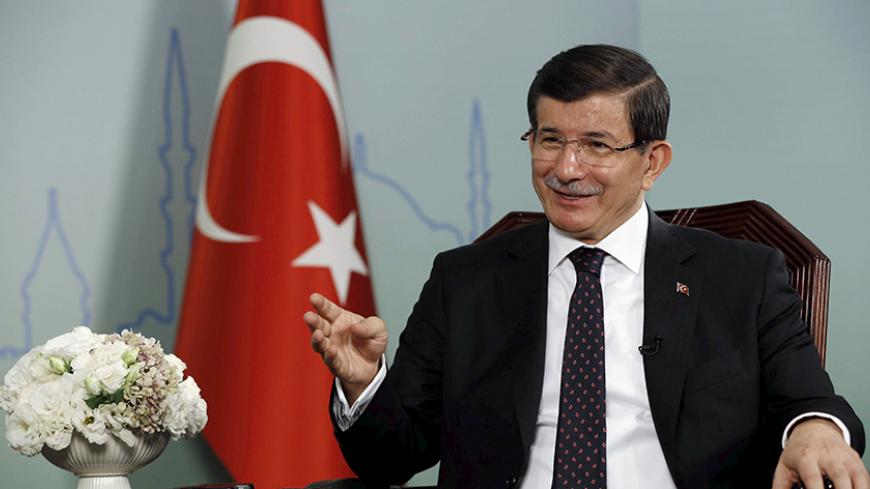 Turkish Prime Minister Ahmet Davutoglu talks during an interview with Reuters in Istanbul, Turkey, Oct. 14, 2015. Davutoglu told Reuters that some of the suspects in a suicide bombing that killed 97 people in Ankara had spent months in Syria and could be linked to the Islamic State or to Kurdish militants. - REUTERS/Murad Sezer

Turkey was introduced to the phrase “terror cocktail” in the first television appearance of Prime Minister Ahmet Davutoglu after the Oct. 10 bomb attack in Ankara.

“[The attack was] an attempt to prevent the AKP [Justice and Development Party] from becoming the single ruling party, to influence the outcome of the election,” Davutoglu said. “It is clear that someone is blending all terror organizations in what I call the terror cocktail, to carry out operations.”

Davutoglu continued to refer to the terror cocktail concept in his subsequent television appearances. In one case, he said, “Terror organizations all drink from the same glass." He said the Kurdistan Workers Party (PKK), the Islamic State and the Revolutionary People’s Liberation Party-Front (DHKP-C) "all want chaos in Turkey."

"We know the perpetrators and connections of the latest attack [Ankara bombing]," he said, adding there are "elements" of Syrian President Bashar al-Assad inside IS. "There are intelligence elements of other countries in the PKK" and the US-supported, Kurdish nationalist Democratic Union Party​ (PYD). "This is what I mean by terror cocktail.”

Pro-AKP media fell in love with the concept and immediately began using it in their reports and comments about the Ankara bombing.

Burhanettin Duran of the Ankara-based, pro-AKP think tank Foundation for Political, Economic and Social Research (SETA), said the phrase particularly refers to the Assad regime's cooperation with terrorist groups and with countries that don't want a stable Turkey. According to this line of thought, these terror outfits and their backers are not only watching the fault lines of Turkey’s domestic politics and elections, they actually plan new disturbances, knowing each other's strategies and thinking.

Duran said the cocktail phrase and the strategy are going to be around for a long time — certainly until the civil war ends in Syria.

“The Ankara attack was but an example,” he said.

Abdulkadir Selvi of Yeni Safak daily newspaper sees the primary cause of the terror in Turkey as the PKK-PYD collaboration. “The PYD on one hand works with the US, and makes deals with the Assad regime and IS on the other. Now Russia is engaged in military deployment in the Kurdish region of Qamishli and Hasakah with assistance of the PYD. Why do some think it is unnecessary to try to find PYD-PKK involvement alongside of [IS] in the Ankara bombing? Aren’t PYD-PKK involved in such affairs? They have deals with Assad, work with Iran. They are in accord with Russia. Now they are getting guns from the US.”

Figen Yuksekdag, co-chair of the Peoples’ Democratic Party (HDP), said the terror cocktail is a political concept that pushes the limits of logic and insults people’s intelligence. For her, this is a concept developed to sustain the AKP's political rule.

Academic Vahap Coskun said, "The government, by inventing this concept, is actually shooting itself in the foot.”

Coskun thinks that the AKP government was seriously disturbed by the HDP declaring itself the real target of the Ankara bombing, and the AKP decided to develop the idea to accuse the Kurdish groups of being behind the bombings alongside IS. The tactic, he said, will backfire.

“Those responsible for governance cannot shoot their mouths off. They cannot and must not utter the first thing that comes to their minds. As a government, when you are accusing a person or an organization as a perpetrator you have to base your words on solid evidence. You cannot simply accuse anyone purely for domestic political considerations,” he said.

In reality, the cocktail concept was instantly popularized by the AKP elites and their friendly media as yet another attempt to put the PKK in the same basket as IS. With this new concept, they are able to lump together the Gulenists, leftist radicals, the Assad regime, some European countries, Iran, Russia, the United States and, more importantly, the leftist labor unions of Turkey and civil society. Thus, the propagation of the cocktail idea becomes a means of protecting AKP votes from being siphoned off to other parties.

This versatile recipe allows the AKP, especially President Recep Tayyip Erdogan, to combat political opposition by hiding behind the state security bureaucracy, and to deflect personal criticisms against party members as criticism of the state and thus as a security threat.

Also, the metaphor provides an easy-to-understand and strong narrative for those who prefer to believe what they hear instead of asking questions. By using the buzz phrase, the AKP is able to appeal to nationalist segments and hopes to shift some votes from the Nationalist Action Party (MHP) electorate in the Nov. 1 elections.

It is also a way for the AKP to secure its political legitimacy in front of the nation as a way of covering up foreign policy fiascos such as its Syria policy, illegal immigrants in Turkey and Turkey’s connections with IS.

The cocktail label vilifies PKK-PYD relations with the United States, Russia, Iran, the Assad regime and other international actors, painting what is happening as dirty, sinister deals and terror connections.

The cocktail concept also allows the AKP to mark IS as a willing proxy available for others to use. Playing up IS' role as a collaborator in the Ankara attack — emphasizing its work with other terror groups — lessens the credibility of media and opposition accusations of an AKP-IS relationship.

That potent cocktail is designed to make the public begin to think that all those opposed to Turkey’s emergence as a power are united against the AKP. The idea is that people will see the AKP as the only force in the country fighting against that sinister coalition.

Such an obscure, blurred threat from an endless list and combination of foes creates certain confusion for the security bureaucracy. That, in turn, only means further deterioration of the effectiveness of Turkey's security bureaucracy. The bureaucracy is already experiencing serious capability and prioritization problems trying to cope with domestic issues, the PKK, IS, armed leftist groups, Gulenists in the state structure and regional issues such as the Syrian civil war, in addition to political crises in Iraq and the eastern Mediterranean.

But it was Erdogan who reached the pinnacle of cocktail mixing. On Oct. 22, as he addressed a labor union assembly, probably because of his pious upbringing, Erdogan didn’t use the term "terror cocktail" but coined a new label, “collective terror," which may well replace Davutoglu’s label.

“This is a fully collective terror action. There is [IS], there is the PKK, there is the Mukhabarat [Syrian intelligence] and there is the PYD, the terror organization in northern Syria. They planned this attack jointly, all together,” Erdogan said.