If Turks had any delusion of seeing IS somehow less dangerous than the PKK, then they must have been woken by the ferocious attack on the Ataturk airport. 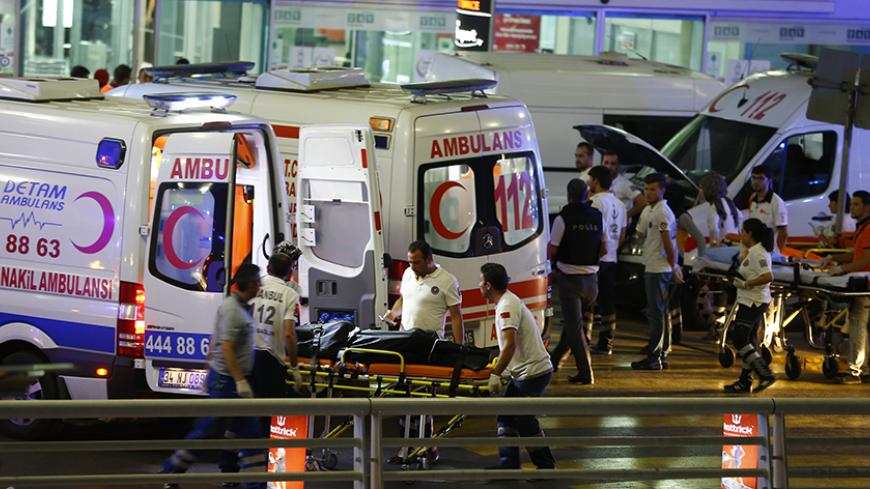 Istanbul Ataturk Airport was hit by a major terrorist attack June 28. The airport, which carries more than a million passengers a week and ranks as Europe’s third largest, was attacked by three terrorists around 10 p.m. when they arrived in a taxi whose driver was probably unaware of the motives of his customers. The attackers apparently had AK-47 rifles, which they fired randomly, and suicide bomb vests, which they activated both in outside and inside the arrival level of the international terminal.

At least 41 people lost their lives, and more than 239 were injured. Most victims were Turks; others were foreigners from Iraq, China, Saudi Arabia, Iran, Tunisia, Jordan, Uzbekistan, Switzerland and Ukraine. The overwhelming majority of the victims were Muslims who were ruthlessly killed in the middle of the Muslim holy month of Ramadan.

Who carried out this attack? During the initial hours it was not clear. The usual suspects included both the Islamic State (IS) and the Kurdistan Workers Party (PKK), the militant pro-Kurdish group that has been at war with the Turkish government for decades. My first guess was IS, because the PKK’s attacks often target the police or military without minding the “collateral damage.” But this attack was a totally random slaughter of innocents like in Paris and Brussels. No wonder Turkish Prime Minister Binali Yildirim pointed to IS as “the prime suspect.”

We will probably learn more about the identity of the three terrorists in the coming days or weeks. So far, Turkish authorities have only announced that their bodies are torn apart and they are suspected to be foreigners, not Turkish citizens.

The burning question remains as to why IS hit Turkey so ferociously. In fact, there have been several other IS attacks in Turkey in the past year — in Diyarbakir, Suruc, Ankara and twice in Istanbul. These seemed to have specific ideological targets: The first three were against secular, left-wing, pro-Kurdish groups; the Istanbul attacks were against foreign tourists. But this time ordinary people were targeted, as was Turkey’s largest airport, which means Turkey’s already troubled tourism industry and international image have again been dealt severe blows.

One simple reason for this latest IS attack might be that Turkey and IS have in fact been at war since July 2015, when the Turkish government allowed the United States to use its Incirlik Air Base in southeastern Turkey to hit IS. As a result, as I wrote in Al-Monitor last August, IS had upped the rhetoric against Ankara, condemning Turkey as an “apostate state” and vowing to “conquer” Istanbul. Since then, as the US-Turkish cooperation against IS continued — despite a serious disagreement on Syrian Kurds — IS’ perception of Turkey as an enemy only deepened.

Moreover, the IS-Turkish confrontation had escalated since the beginning of this year, as IS began shelling the Turkish town of Kilis and Turkish armed forces began retaliating with long-range rockets. More recently, Turkey supported — albeit not very willingly due to its worries about Kurds — the US-assisted takeover of Manbij, which used to be one of IS' strongholds in northern Syria, by the Syrian Democratic Forces.

As a result, apparently, IS began sharpening its blade against Turkey. In fact, as reported by Turkish journalist Hande Firat, the Turkish intelligence agency had warned various state bodies in early June, 20 days before the attack, that IS could hit targets inside Turkey to avenge “Turkish hostility” in Syria, which included sealing off the border to IS recruits. Notably, one of the targets mentioned in the report was the Ataturk airport where security was heightened — but apparently not enough.

Finally, there is the question of what Turkish policymakers will do about the IS threat, which took them quite a while to fully realize. We will probably see more security measures in Turkey’s airports, malls and other centers of attraction. There will also likely be more meticulous searches and arrests of IS cells inside Turkey, which Al-Monitor had warned about, and prevention of IS leakages from the Syrian border.

But there is also a strategic issue that the Turkish government has to face: Do we really want to keep fighting two separate wars on terror against two separate enemies: IS and the PKK? Does this not complicate the scene, especially given that on the other side of the Syrian border, these two powers — IS and the PKK’s Syrian affiliate, the Democratic Union Party — are at war with each other? Is there a chance that the “peace process” with the PKK can be restored and therefore Turkey can focus on the IS threat by also fully aligning with its Western allies in Syria?

If I were advising the Turkish government, I would urge them to consider the idea. I would also remind them that while you can negotiate with the PKK, as we have seen, you possibly cannot negotiate with IS. And if we Turks had any delusion of seeing IS as somehow less dangerous than the PKK, then we must have been woken by the ferocious attack on the Ataturk airport.