Twitter said the suspensions were part of a broader operation in which it had removed and suspended accounts linked to state-run propaganda and disinformation centers in China, Russia and Turkey. 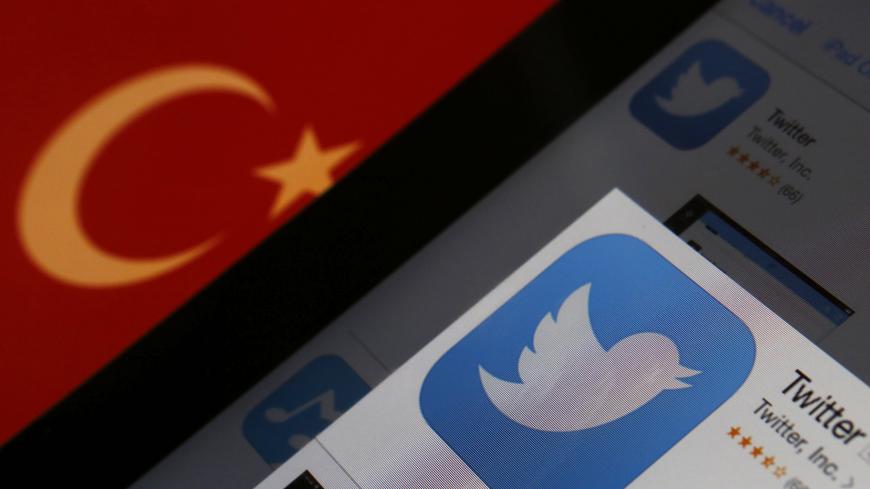 A Twitter logo on an iPad display is pictured next to a Turkish flag in this photo illustration taken in Istanbul, March 21, 2014. - REUTERS/Murad Sezer

Turkey reacted angrily to Twitter’s announcement yesterday that it had suspended over 7,000 “fake and compromised” accounts linked the youth wing of President Recep Tayyip Erdogan’s Justice and Development Party (AKP) that the social media giant said were used “to amplify political narratives favorable to” him and his ruling party.

Twitter said the suspensions were part of a broader operation in which it had removed and suspended 32,242 accounts after investigations established their links to state-run propaganda and disinformation centers in China, Russia and Turkey.

In a blistering statement, Erdogan’s communications director contested the company’s assertion that the accounts were fake and run by a state-linked troll network.

Fahrettin Altun called Twitter’s move “an arbitrary act, hidden behind the smokescreen of transparency and freedom of expression” that “demonstrated yet again that Twitter is no mere social media company but a propaganda machine.”

Altun went on to accuse Twitter of seeking to “support and promote black propaganda by anti-Turkish entities.” In a thinly veiled threat, Altun added, “We would like to remind this company of the eventual fate of a number of organizations, which attempted to take similar steps in the past.”

Altun’s remarks prompted a flurry of derision — and sympathy. Some tweeps likened him to Hitler’s minister of propaganda, Joseph Goebbels. The hashtag #TrollerPatladi, which roughly translated means “Trolls blown up,” was trending on Turkish Twitter today as government critics celebrated the news.

Thank you @Twitter for closing down the bot accounts managed by Turkey's presidency.

Thank you for standing for the free democracy! We appreciate it very much.! #TrollerPatladı

Steven Cook, a senior fellow at the Council on Foreign Relations, called Altun’s statement “typical government claptrap.” Cook added in emailed comments to Al-Monitor, “Altun is seeking to undermine what Twitter has done to clean up its platform by insinuating that there is an ideological, anti-Turkish agenda at play. It will convince no one except the most ideologically committed to the AKP.”

Government sympathizers exhorted Altun to ban Twitter, something the government did for two weeks in 2014 after Erdogan vowed to “wipe out Twitter.”

The move followed damaging allegations of graft within Erdogan's inner circle that began to circulate widely on social media.

Altun's words today prompted speculation that the government may be gearing up for another ban. "This affair could result in a ban. I believe it's a good idea to get your VPNs ready," tweeted Ozgur Unluhisarcikli, Turkey director of the German Marshall Fund of the United States.

Turkey, alongside Russia, is the top petitioner for Twitter to remove content according to Twitter’s most recent transparency report.

Twitter has become a veritable minefield in Turkey, where thousands of users have been investigated, prosecuted and in many cases detained on a panoply of thinly evidenced charges ranging from inciting terrorism to insulting Islam and Erdogan in their tweets.

At the same time, it’s an effective tool to promote the AKP’s own narrative through its alleged army of trolls who harass critics and besmirch them with wild accusations of violence and espionage, while at the same time attempting to hack their accounts.

Their victims include Canaan Kaftancioglu, the gutsy provincial boss of the main opposition Republican People’s Party Istanbul branch. Her account was temporarily suspended in May after being hacked by the so-called the “Ebabil” movement.

The aggressively pro-Erdogan group surfaced online on May 10 vowing to combat tweeps who “engage in enmity to the state.” The number of accounts bearing its logo — a bird in a yellow circle — grew to 20,000 within weeks, according to the opposition newspaper Birgun.

The Turkish accounts targeted by Twitter were created between June 9, 2008, and Jan. 18, 2020, according to Stanford University’s Cyber Policy Center, which analyzed Twitter’s data in a report that was also released yesterday. They sought to drum up support for Turkey's military intervention against the Pentagon's Kurdish allies in northeast Syria and for a 2017 referendum to boost Erdogan's presidential powers among others, the center observed.

Max Hoffman, associate director for national security and international policy at the Center for American Progress (CAP), said the DC-based think tank’s recent research shows that government censorship and propaganda “is feeding deep distrust of the mainstream media and driving many Turks — particularly young voters — to social media and online outlets that are seen as more independent.” Hoffman told Al-Monitor in emailed comments that CAP’s data showed that Turks who got their news on social media were “more likely to oppose the government even after controlling for a range of other factors. So, it is a growing vulnerability for the AKP.”

“This AKP bot network tells us that the party knows they have a problem on social media and with young voters, who were the main targets of the manipulation campaign.”

The pro-government camp is pushing back. Prominent pro-Erdogan columnist Hilal Kaplan, for example, called on her 528,000-plus Twitter flock to follow a new account set up in January to replace one that was removed in an earlier purge.

The account, @FetoGercekleri, purported to counter disinformation spread by sympathizers of Fethullah Gulen, the Pennsylvania-based Sunni preacher who is accused of masterminding the July 2016 coup attempt against Erdogan.

A prominent Turkish commentator who used to be a strong supporter of Erdogan insisted, however, that the Twitter cull had done little to dent the AKP’s alleged cyber force. “For example, the Pelican network, which everyone in Turkey is familiar with, hasn’t been touched,” he said.

The so-called Pelican network of assorted pro-Erdogan figures is widely alleged to have laid the ground for the dismissal of Turkey’s former Prime Minister Ahmet Davutoglu in May 2016 through a series of essays called the Pelican Dossier. They catalogued his alleged efforts to undermine Erdogan. The group is said to be led by Erdogan’s son-in-law, Finance Minister Berat Albayrak, and his businessman brother Serhat.

“The Pelican network is a black propaganda and fake news network that poisons democratic discourse and fabricates and spreads doctored videos and baseless news that is supported by the [Turkish] state,” the commentator, who spoke on condition that he not be identified, told Al-Monitor via WhatsApp. He pointed to several accounts that he said operated on their behalf.

Davutoglu, who set up his own “Gelecek” or “Future” party this year, hinted in an interview with oppositional Halk TV on May 26 that Erdogan was linked to the Pelican network.

Davutoglu claimed — without elaborating — that Erdogan had visited the villa where the alleged group operates a think tank called Bosphorus Global.