Syrian refugee children in Turkey are being educated in a variety of government, private and religious schools. 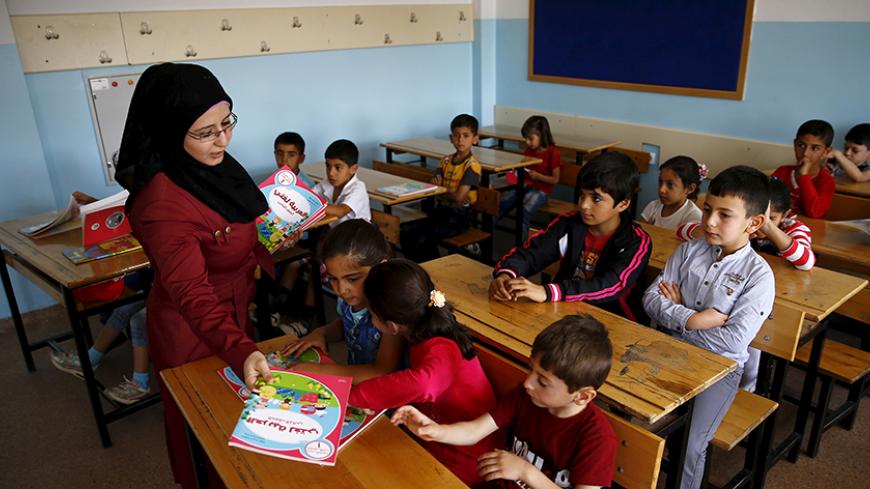 A Syrian refugee teacher distributes books to her refugee students in their classroom at Fatih Sultan Mehmet School in the Karapurcek district of Ankara, Turkey, Sept. 28, 2015. - REUTERS/Umit Bektas

ISTANBUL — According to UN statistics, more than 4 million Syrians are in need of education inside and outside their country. The United Nations High Commission for Refugees reports that some 3 million Syrians have fled their homes to seek safety in Turkey. With that, Turkey has become the neighboring country with the most Syrians fleeing the 5-year-old civil war. Children and youths under the age of 18 constitute half of the Syrian refugees in Turkey. As a result, the education issue has become a key priority there.

Several schools have been established in Istanbul and Gaziantep to help refugee children address the language barrier impeding integration into Turkish society. Some of these schools are funded by the Turkish government, while others were established through personal initiatives and funding.

Al-Monitor spoke by phone with Najdat Waez, a university teacher and founding member of the Syrian Education Commission, a Turkish nongovernmental organization based in Istanbul and with offices in several other cities that focuses on supporting schools for Syrians in Turkey. Waez, who resides in Turkey, said, “I do not have accurate statistics on the number of Syrian schools in Turkey, but there are definitely more than 1,000. The commission has edited and published millions of books and so have the interim government [formed by the Syrian National Coalition] and some relevant organizations in the field. The Syrian curricula are good and capable of graduating a successful Syrian generation if properly edited to remove lessons about the Baath Party.”

Waez further said, “The Qatar Charity, the Abdulkader Sankari Foundation and the interim government have offered their support. School staff mostly consist of volunteer university students, and there are also many professional teachers and administrators who work in the education sector. The Turkish government has been offering broad support and cooperation to this sector.”

Observers have noted that some of the Syrian schools in Turkey have been structured to serve the interests of those supporting them financially, like the Muslim Brotherhood and Salafists, in their particular case to propagate ideas among children to mobilize them politically or religiously in the future and to benefit from their capacities and numbers. The writer Leila al-Rifai asserted Aug. 22 in an Al Jazeera blog, “The Sharia schools/institutes deal with their followers based on the master and disciple approach. The disciple surrenders his mind, soul and personality to his master.” Here Rifai is referring to the disciples being the students, who blindly absorb what they are taught, and the masters being sheikhs playing the role of teacher. She further criticized the schools in Istanbul by describing them as chicken coops.

Samara al-Inabi, a Syrian mother of two in Istanbul, told Al-Monitor about her experience with Syrian Sharia schools, which are separate from the schools affiliated with the Syrian interim government. “I had to take my children out of the free Syrian school [in Turkey] and put them in a private Turkish school after realizing that the curricula only included religious material and jihad and fiqh lessons and dismissed physics, chemistry and technology. The aim is to entrench the idea that the sciences oppose religion and to obtain the complete loyalty of children to the sheikhs, who take the place of teachers.”

Inabi suggested a solution to the problem — “putting Syrian schools under the direct oversight of the UN and banning any educational projects that take place without coordination with the official Turkish government to ensure proper education standards.”

Not all Syrian children refugees are able to enroll in Turkish government schools, because they lack the requisite official documents, such as passports and their old school records, which many left behind in Syria when they fled for their lives. Some lack even identification papers, which also hinders their obtaining residency permits.

Rony Elias, a Syrian currently residing in Istanbul, related to Al-Monitor what happened with his 9-year-old son along these lines. “I illegally entered into Turkey to flee the conflict, bombings and deteriorating living conditions back in my town of Qamishli,” he said. “I arrived in Istanbul with my wife and son and had to enroll him in a Syrian school [there], as he did not have a passport to be able to go to a Turkish school. We knew about the program and the Islamic books this [Syrian] school taught, and we were aware that it does not suit a Christian child. Yet he remained at this school for two months, before he got a passport from the Syrian consulate in Istanbul. This is when we enrolled him in a Turkish school.”

For the current school year, the Turkish government took measures in August to standardize the education process in both Syrian and Turkish schools for refugees and expedite the integration of Syrian students into Turkish society. Students receive intensive Turkish-language sessions and are being taught the Turkish curriculum. Turkey's government also trained around 290 Syrian teachers under the supervision of UNICEF, the United Nations Children's Fund, and distributed them across Syrian schools as staff and to build capacities.