The Lebanese Ministry of Education is working with international donors to increase the country’s capacity to secure education for the large number of displaced Syrian children. 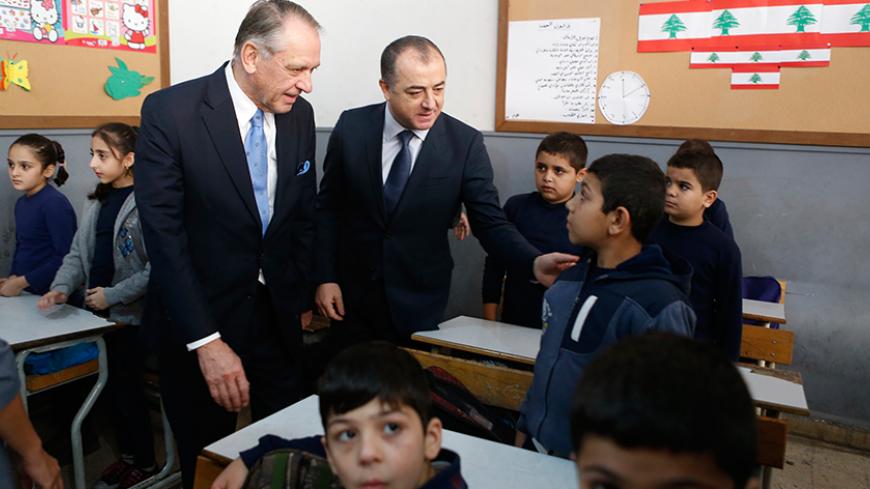 BEIRUT — Syrians escaping the civil war that has been raging in their country since March 2011 now account for almost one-third of Lebanon’s population. They represent a huge burden for Lebanon and are affecting various sectors, including the public education system.

In June 2011, the number of Syrian refugees in Lebanon stood at 2,000, but today, according to Lebanon's Ministry of Education and Higher Education, the number of Syrians registered with the UN High Commissioner for Refugees (UNHCR) has reached 1.181 million. Media reports cite an unofficial figure of 1.8 million. According to numbers Al-Monitor obtained from the ministry, 400,000 of the refugees are of school age, 3-15 years old, but only 150,000 of them, 37.5%, are studying in Lebanese public schools.

Syrian children not attending school are being deprived of an education because their parents have not sought to enroll them or due to their inability to keep pace with the educational program after extended absences. The Ministry of Education has therefore developed an extracurricular, four-month Accelerated Learning Program to enable students to catch up and stay in the educational system. The largest number of school-aged refugee children are in Baalbek-Hermel, the Bekaa Valley, Mount Lebanon and the north.

Under normal circumstances, the Lebanese state covers students’ public education fees and the cost of books. This, however, changed with the Syrian war and the ensuing influx of refugee because of the state’s limited capacity to cope. All children are entitled to free education in Lebanon, prohibiting discrimination between a Lebanese and a Syrian student. Lebanon, therefore, called for international assistance to deal with the increased number of students.

The Lebanese Ministry of Education is now working with United Nations organizations, namely, UNHCR and UNICEF, which are funded by agencies like UKaid (Department for International Development) as well as the European Union and individual countries, including Germany, the Netherlands, Norway and the United States. The donor agencies and organizations are fully covering the education fees for non-Lebanese students.

Although exact figures are unavailable, Lebanon has been receiving enough international aid to provide Syrian children access to morning school sessions already available to Lebanese children, without additional burden to the state. To provide education to the largest possible number of students, the Ministry of Education developed afternoon sessions specifically for displaced students to ease overcrowding. Some schools now accommodate at least 500-700 refugee children in the afternoon. There are now 259 such schools, compared to 144 last year, with some 85,000 children enrolled.

International donors are paying $363 for each refugee attending morning classes and $600 for students enrolled in afternoon classes. The cost difference arises from the extra expenditures incurred in setting up and running the afternoon sessions. The donors also pay $60 per student to cover parents’ contribution to the school fund. This assistance covers administrative expenses, education fees and school operating costs, but excludes improvements to infrastructure and equipment.

Education Minister Elias Bou Saab told Al-Monitor, “International aid meets 80% to 90% of Lebanon’s needs, which is an achievement and great progress.” He pointed to the importance of the confidence that the international community must have in Lebanon in dealing with the education issue with transparency and through partnership, as the donor organizations are monitoring their expenditures. He added, “The Ministry of Education has succeeded in confining education to public schools, knowing that schools lacking [official] status had previously been receiving displaced students.”

Bou Saab added, “The biggest challenge lies in the continuation of the annual international education support through UNICEF, the UNHCR and the World Bank,” further warning that the interruption of such assistance would lead Syrian students to the streets.

While the biggest challenge for the Ministry of Education is to provide education to the largest possible number of Syrian children, another challenge it faces is not letting the current situation negatively affect Lebanese students. In this regard, Bou Saab said, “The afternoon shift aims at providing education to Syrian students who failed to follow the Lebanese curriculum due to their different level of education.”

In several areas, the number of Syrian students is close to or greater than that of Lebanese students, especially in Mount Lebanon. The Ministry of Education had initially managed to limit the number of Syrian students admitted to each class, but the system became overloaded amid the worsening of the refugee crisis. There was concern that delays in educating the displaced might negatively affect the Lebanese students, especially in language learning, because of the difference between Syrian students' narrower exposure to languages compared to the broader focus in the Lebanese curriculum.

The ministry official overseeing the Syrian student situation told Al-Monitor that the morning shift teachers are exhausting themselves dealing with the educational differences between Lebanese and Syrian students. The Ministry of Education is taking steps in this regard, and through the British Consulate and French Embassy, has organized training courses for teachers to help them cope with the educational needs of all children as well as maintain harmony between different groups of students, minimize potentially destabilizing impacts and handle psycho-social and language issues among students and their parents. The training is organized around Reaching All Children with Education, a three-year plan launched in early 2014 to last three years. The plan also involves several other themes, chief among them securing education and the necessary equipment to educate children.

The displaced students are following the Lebanese curriculum, and school principals, according to the Ministry of Education, say that they are eager to learn. Until a political solution ends the suffering of the Syrian people, Lebanon will need all the support it can get to cope with the burden of the war and prevent a Syrian generation from growing up without an education.