Syrian refugees in Jordan, estimated at as many as 240,000 with more coming every day, are straining Jordan’s infrastructure and education system, Ben Gittleson reports from Irbid. 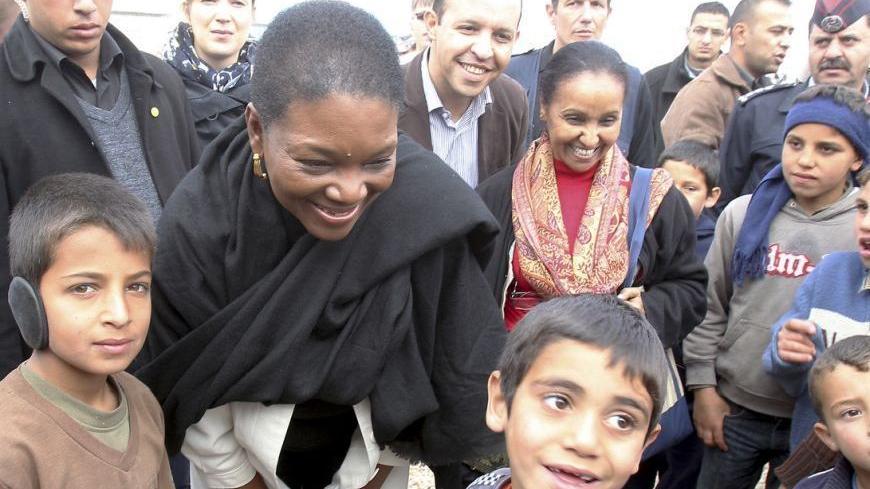 Valerie Amos, the United Nations' undersecretary-general for humanitarian affairs, meets Syrian refugee children during her visit to the Al Zaatri refugee camp in the Jordanian city of Mafraq, near the border with Syria, Nov. 27, 2012. - REUTERS/Ali Jarekji
December 2, 2012

IRBID, Jordan — A mother and young girl from Syria shuffled into the principal’s office at the towering Qadasiya school on Wednesday, hoping to find a way for the child to attend class with other kids who speak, look and study like her. Let her stay, a Ministry of Education official said, and you can fill out the paperwork afterward.

The Jordanian government last week relieved pressure on already packed public schools by moving hundreds of Syrian children into special afternoon shifts at three schools in this northern Jordanian city, as the government buckles under the weight of Syrian refugees.

A major influx of refugees in recent weeks — about 500 cross into Jordan each night — has severely strained already overstretched Jordanian infrastructure and has put pressure on the kingdom’s finances as it faces some of the most significant protests in its history, which were sparked by simmering discontent over the worsening economic situation here. As it did when Iraqis fled violence in their country, the government has pledged to provide free education, health care and other services to the Syrians.

Five hundred Syrians have enrolled so far at Qadasiya, and many more pour in each day, said Rania al-Reyahna, the principal. The ministry’s plan has opened up space in schools in the north where class sizes had reached upwards of 50 or 60 students.

“Thirty kids in a class is better than 70,” Reyahna said. “We had three students at a desk — now there are two.”

The government heavily subsidizes energy, health, water and food, as unemployment and poverty remain high. Already facing an energy crisis, a ballooning budget deficit and foreign debts, the country has watched its fiscal outlook sour as Syrians place more demands on infrastructure and services; most refugees live outside Jordan’s one camp for Syrians.

“They are scattered all over the kingdom,” said Feda Gharaibeh, the director of the humanitarian relief coordination unit at Jordan’s Ministry of Planning and International Cooperation. “They use our water resources, they use our infrastructure, they compete with Jordanians in our labor market.”

Across Jordan, over 138,000 Syrian refugees are registered or have registration appointments with the United Nations’ refugee agency, and the government says over 100,000 more live there undocumented.

In Irbid and other northern cities like Mafraq and Ramtha, as well as the eastern part of the capital Amman, Jordanian teachers struggle to teach large classes with Syrians accustomed to a somewhat different curriculum. Over 20,400 Syrians have registered for schooling in Jordan — 2,000 more sit on a waiting list.

For those who cannot afford transportation to Irbid’s three double-shifted schools, they rely on the whim of principals who sometimes say they have no space.

But others have thrown open their doors. At a school for girls in Boshra, on the outskirts of Irbid, teachers have adjusted their lessons and administered special catch-up tests, and officials in the area collected old uniforms and book bags for the couple dozen Syrian children who said they love learning Arabic and math with their Jordanian friends.

“The classrooms are small, but our hearts are big,” the principal, Olla Husienat, said.

The financial crush from the refugees comes as political unrest spreads across Jordan. Cuts to fuel and gas subsidies three weeks ago resulted in immediate protests, marches and strikes across the normally quiet country.

In October, Jordan appealed for $700 million from the international community to help Syrian refugees, Gharaibeh said. Only 10% of that has been fulfilled, she added.

“It’s a big burden for the government in a situation of financial constraint,” Michele Servadei, the deputy representative for the United Nations Children’s Fund (UNICEF) in Jordan, said. UNICEF covers much of the extra educational expenses, from salaries and running costs to school supplies and psychosocial services.

But despite the efforts of teachers and aid organizations, many children are still falling through the cracks.

The school, which like the others follows the Jordanian public-school curriculum and is staffed by Jordanian teachers, has the capacity for 4,200 children taught in double shifts — girls in the morning, boys in the afternoon.

Children pop in and out of rooms throughout the day at the Zaatari school, as Syrian principals-turned-teaching assistants shoo them inside.

Recent memories of trauma leave children psychologically vulnerable, and outside the camp they can be sensitive to teasing from Jordanian classmates. Some choose to stay home rather than braving a new learning environment. Many had already dropped out in Syria, where fighting has stopped day-to-day life in much of the country.

Several students at the Zaatari school were shocked when they saw a photograph of Syria’s President Bashar al-Assad in their Jordanian textbooks; they ripped up the pages and stormed out; UNICEF recommended teachers skip that chapter.

“This is a public school system, and public school systems are not designed to carry all of these externalities that affect the lives of children,” said Curt Rhodes, the international director of Questscope, a non-profit organization partnering with UNICEF to design alternatives to formal education for Syrians in Jordan.

No one knows how many of the registered students actually attend class each day.

Refugees at Zaatari said they had more pressing concerns than education, like obtaining enough food for their families and keeping warm as the winter approaches. Some hold on to the continuously disappointing hope they might be able to drop everything tomorrow and head back to their towns and villages across the border.

A mother of six sat in her tent a short walk from the Zaatari school on Sunday, her 13 year-old-son absent after spending just a couple days attending classes after his family arrived in Jordan two weeks ago.

“I don’t want him to enter school and then have to leave,” said the woman, who asked that her name be withheld.