The new school year opened with sit-ins at both government and UNRWA-affiliated schools in Gaza in protest of the schools' efforts to combine boys and girls in the same classes. 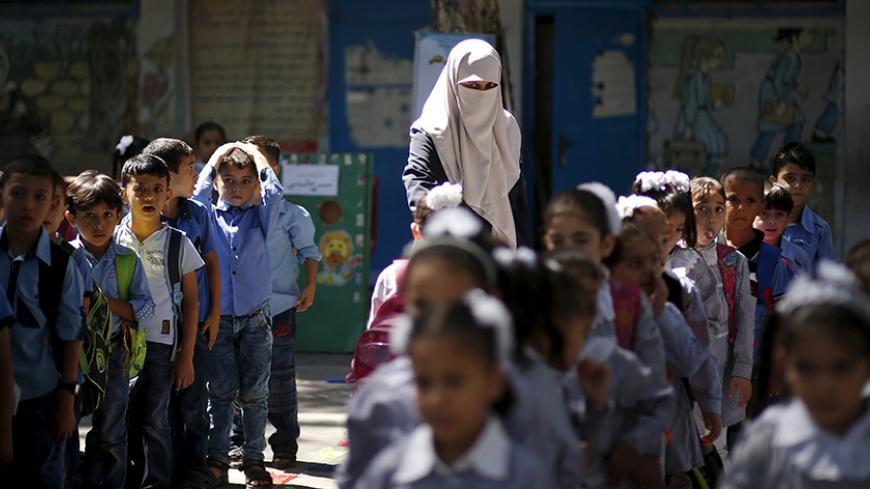 A veiled Palestinian teacher stands with boys and girls as they get in line at a United Nations Relief and Work Agency school in Gaza, Sept. 22, 2015. - REUTERS/Mohammed Salem

GAZA CITY, Gaza Strip — The parents of many students of Al-Razi Primary School for Girls in Rafah province were surprised on the first day of school on Aug. 28 to see that their daughters' names were missing from the school’s enrollment lists. The director of the school, which is affiliated with the United Nations Relief and Works Agency for Palestine Refugees in the Near East, suggested they go to the UNRWA-affiliated Rafah Elementary “C” Boys School to see if they had been transferred there. They found the students registered at the boys' school, where each class had grown to include around 30 boys and between five and 10 girls.

Later that day, the parents staged a sit-in at the school to protest the decision to move the girls without their knowledge and to the mixing of the genders.

Adding insult to injury, the school's administration could not give clear reasons why some female students were transferred to an all-boys school, saying only that it's trying to end the double-shift system currently operating in 94% of UNRWA schools for refugees. The same building in Rafah accommodates two schools — al-Razi primary school and Rafah elementary school — operating on double shifts: one full school day in the morning and another for different students in the evening.

The father of one of the 250 students who were transferred, Abdel Menhem Zaareb, told Al-Monitor, “I registered my daughter in first grade in 2015 at Al-Razi Primary School for Girls, and I did not see this coming. Students are normally promoted to the next class in the same school.”

He added, “On the first day of school, I went with my daughter and was surprised that she had been transferred to a mixed school. I rejected this, and I staged a sit-in in Al-Razi's playground.”

Zaareb was soon joined by the parents of 120 other transferred students. They voiced their objection and threatened to shut down the school if their daughters were not restored to its records.

Although the girls who were transferred were in the first and second grades, parents reject mixing students at any grade level. Zaareb said, “Nobody has the right to transfer a student without informing their parents and getting their approval. Even if the UNRWA has the authority to move students, it has to contact the parents first and respect their decision not to mix girls and boys in the same classroom. Parents must be given the choice to transfer their children or not enroll them at school.”

Zaareb explained the transfer, saying, “The UNRWA announced that it was seeking to eliminate the double-shift system for schools in Rafah province [and in doing so], all primary schools would become mixed.”

He was surprised that the idea could not be implemented without mixing girls and boys, and he added that he prefers that his daughter study at an all-girls school with the double-shift system rather than at a mixed school with one schedule. Only 6% of UNRWA schools in Gaza operate in a single shift, as two shifts are needed to serve the overpopulated districts.

Zaareb told Al-Monitor that a week later, on Sept. 4, the UNRWA gave in to the pressure from the parents’ sit-in and submitted a proposal under which any parent objecting to the transfer should petition the UNRWA education directorate in Rafah and give reasons for the objection. The requests would be examined and responded to as soon as possible, yet there would be no guarantees that the students would be transferred back.

Zaareb added, “The UNRWA approved my request on Sept. 13 and I returned my daughter’s file to her school. The same worked for 30 other students.”

Nidal Abu Nuqeira, the father of another transferred student, told Al-Monitor, “They chose the students whose parents do not have any connections at school.” He denied the director’s claim that the transfer affected the girls who were late to register, saying that he had registered his daughter on the second day of registration.

Abu Nuqeira’s daughter is still at home, as her father refuses to enroll her in a mixed school and awaits the directorate’s approval of his request. He said, “My daughter is devastated, and every day she asks me to allow her to go to school. They took away her happiness about enrolling in school for the first time.”

More than 70% of government schools in Gaza also operate on the double-shift system because of the lack of schools.

Also on Aug. 28, the parents of the students at the government-run Jarar al-Qudwa school in al-Mawassi in Khan Yunis protested that school’s decision to mix boys and girls in the same classroom and eliminate the double-shift system. Previously, female students and staff had attended the morning courses, while the male students and staff attended in the evening. Like elsewhere, the double-shift system was a way to get double service out of the sparse schools in the area.

The parents, who staged a protest in front of the school, asked the government to build another school. Young female students held banners reading, “We want gender segregation at school.” Parents also expressed their concern that their children would interact between the two shifts.

The protest angered many citizens who accused the parents of backward thinking and complained that girls of this age should not be fed such ideas. Activists spoke out, saying that gender separation should not reach the point where people are concerned about boys and girls sharing a bench or using the same entrance at school.

The general director of international and public relations at the Ministry of Education in Gaza, Motasem al-Minawi, denied that the ministry had received complaints about mixed-gender schools and asserted that any complaint would be addressed immediately.

Journalist Khouloud Nassar posted on Facebook Aug. 28, “How can a little girl who does not know anything about life hold a banner demanding the separation of boys and girls?” She accused the campaign organizers of exploiting and isolating the children.

Walid Chbeir, a lecturer in the Social Service Department at the Islamic University, asserted that there is no problem with mixing students at this age. He asserted that emotions and sexual urges awaken at a later stage. Chbeir told Al-Monitor he was surprised with the campaign and asserted that workshops and forums must be held to raise awareness among parents about the advantages of mixing genders at an early age.

Back in 2013, the Ministry of Education in Gaza issued new rules forbidding men from teaching at girls’ schools and assigning girls and boys to separate classes at the age of 9. Palestinian society in the Gaza Strip is somewhat isolated from the outside world under 10 years of Hamas’ influence, values and principles, which limit mixing genders and segregate them wherever possible.