Israel shelled dozens of schools during the recent Gaza war, destroying and damaging classrooms and leaving many students to study in impossible conditions. 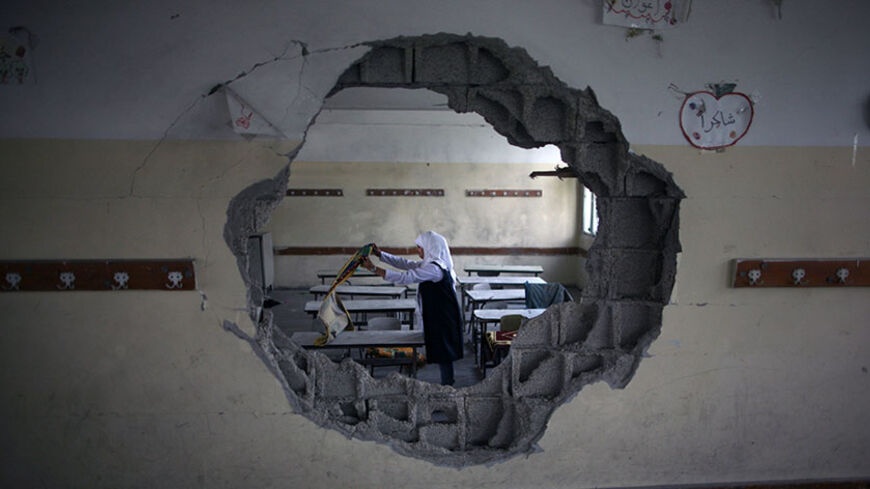 GAZA CITY, Gaza Strip — The marks of the last war with Israel are everywhere at the Subhi Abu Karsh School for Girls in Gaza's Shajaiya neighborhood. Large holes from Israeli shelling riddle the classrooms, and students have tried to fill them with nylon bags to stop the cold winter wind from coming in.

But the cold is difficult to keep out, as Fidaa Marzouk, a ninth grade student, would testify, freezing in her chair as she tries to focus. “We are studying in these freezing cold classrooms that lack the most basic prevention, protection and safety equipment,” Marzouk told Al-Monitor.

She pointed to the large hole near the blackboard. “Every day, we fear that we might fall in,” she added.

Hiba Mortaja echoed her classmate and said with a wry smile, “Three days ago, the teacher had to interrupt the class and ask the students to leave the classroom, as it was filled with rainwater.”

Mortaja told Al-Monitor that the school’s headmistress, Nivine al-Tatar, decided to gather the students into the less damaged classrooms, overcrowding the rooms designed for only 45 students with 75.

Israeli tanks destroyed 19 classrooms in this school, according to Tatar, who said that the district has managed to repair only seven classrooms so far.

“Our school suffers from great damages, which is adversely affecting the education of students. We decided to keep teaching in moderately damaged classrooms. We moved the students of the totally damaged classrooms into other, less damaged ones, jamming the classes with too many students,” Tatar told Al-Monitor.

Israeli forces targeted not only the classrooms, but also the canopy in the school’s yard, under which students used to shelter from the summer heat and the cold and rain in the winter.

During the latest Israeli war on Gaza, 26 schools were completely destroyed and are no longer possible to reopen. Meanwhile, 148 schools were partially destroyed, according to Mutassim al-Minawi, the director of international and public affairs at the Ministry of Education.

Minawi told Al-Monitor, “Not only were primary schools destroyed, but also institutions of higher education. In fact, 11 governmental and nongovernmental higher education institutions were destroyed, and damages are estimated at $11 million. This doesn't include 49 private schools, with $2.5 million worth of damages, and 199 kindergartens with damages amounting to more than $1 million.” He added that the total cost of destruction in the education sector in Gaza amounts to $33.5 million.

He said that the devastation in the education sector has caused major problems in the quality of education in Gaza, as classes have become packed with children, affecting their ability to concentrate.

Minawi noted that the students’ right to education in good conditions has been greatly undermined, stressing that the educational institutions in Gaza lack the most basic of standards.

Mustafa Ibrahim, a legal researcher in the Independent Commission for Human Rights, told Al-Monitor, "Israel did not respect the principles of international humanitarian law, according to which educational institutions ought not be targeted in times of war. However, Israel targeted them without any consideration of the Palestinians' right to education." He also said that in its previous wars on Gaza, Israel had also hit educational institutions.

"Although the investigation committees, which were formed to investigate the targeting of civilian institutions during previous wars, condemned Israeli officials, accusing them of committing war crimes, the international community has failed to hold them accountable and to bring them to justice. This allowed further crimes and persistence in targeting educational institutions," he added.

Ibrahim hopes that this time, the international community will not allow Israeli leaders to commit their crimes with impunity. He also calls upon the PLO to sign the Rome Statute to join the International Criminal Court and hold Israel accountable for its crimes.

For his part, Minawi said, "Until now, no reconstruction works have been initiated to rebuild destroyed schools." He pointed out that according to the plan of UN Special Coordinator for the Middle East Peace Process Robert Serry, the reconstruction process will drag on for a long time.

"Should the current situation persist, with delays in the reconstruction of educational institutions, the education sector will hit rock bottom," he said.