Gazans at risk as winter looms

Much of Gaza's water, power and sanitation infrastructure was damaged in the recent conflict, and repairs are taking time, which has left Gazans looking for alternatives to get through what could be a long, cold winter. 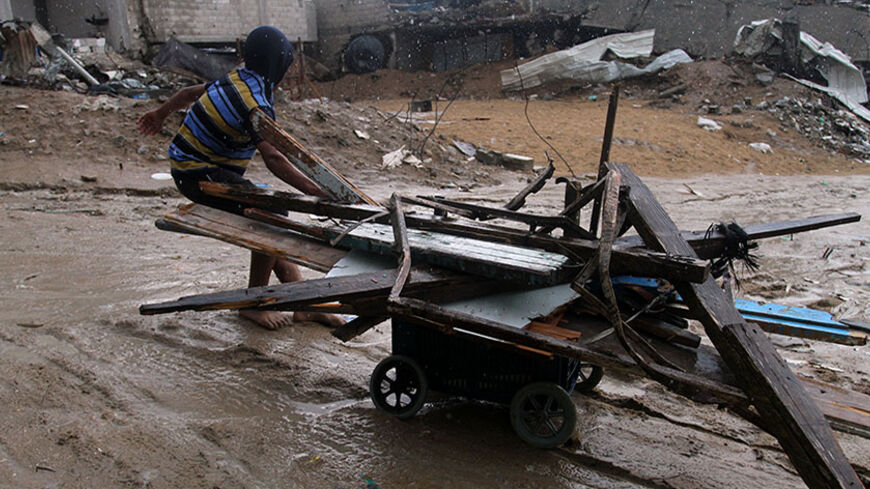 GAZA CITY, Gaza Strip — Every day, Mohammed Maqadima, 14, must carry water in gallon bottles from a water tank 500 meters (546 yards) from his home in the Sha'af neighborhood east of Gaza City. This is so his mother can do the housework. He also spends hours collecting firewood for heating, with the weather getting colder as winter approaches.

Mohammed told Al-Monitor, “I must cross this distance three times a day to carry water to the house. Since the water well in the area was destroyed, we do not receive water service at all.” He said once the tank is empty, residents have to wait for the arrival of water trucks to fill it again.

Large parts of the Gaza Strip, particularly those intensively bombed by the Israeli occupation during the July 27-Aug. 26 conflict, are experiencing complex crises. The first is that the water system is destroyed, which requires thousands of people to carry water long distances. The second is that power lines and poles were also destroyed. This has forced people to look for alternatives for heating and lighting, and for ways to protect themselves from the cold and rain inside damaged houses as winter approaches.

The director general of the Department of Sanitation in Gaza municipality, Saad Eddine Alatbash, said his municipality has not finished repairing the infrastructure, particularly the water and sanitation systems. He noted that large areas are not yet receiving water services, including the neighborhoods of Shajaiya, Sha'af and Toufah, as well as large parts of the Sheikh Radwan district.

In an interview with Al-Monitor, he said that as winter approaches the crises would exacerbate, as rainwater seeps into the ground and, coupled with the leaks in the water system, will flood the streets and houses.

A man pours water into a barrel in Gaza. (photo by Yasser Qudiah)

“A significant shortage in equipment and failures in machinery were caused by the war. We also lack manpower, at a time when it is been four months that employees have not received their paychecks,” he said.

Gaza failed to weather last year's winter storm Alexa and this has increased fears of a major disaster should another storm threaten Gaza this winter.

The general director of the Coastal Municipalities Water Utility, Munther Shiblak, said that the Israeli war has exacerbated the water crisis. “The losses amounted to $34 million in the water and sanitation sector because of the war. Moreover, Israel targeted one water tank, 26 wells, three desalination plants and dozens of sanitary sewer lines during its war on Gaza.”

A report published Sept. 29 by the Office for the Coordination of Humanitarian Affairs (OCHA), which is part of the United Nations, says, “After being hit several times, the Gaza Power Plant (GPP) was shut down on July 29.” The report also says, “Even in areas where service has resumed, outages exceed 18 hours per day, severely disrupting the provision of basic services including health and water throughout Gaza.”

Maqadima said outages have pushed his family to collect firewood for heating and lighting and noted that electric service was disrupted in his neighborhood during the Israeli war on Gaza.

Jamal al-Dardasawi, director of public relations for the Gaza Electricity Distribution Co., said, “A new humanitarian catastrophe awaits Gaza if winter begins and the power distribution network has not been fixed.” In a radio interview on Sept. 22, he said, “In winter, the load on the electricity distribution network increases in general, which [today] would lead to a network collapse in areas where the service is resumed.”

There are few alternatives for heating and lighting for citizens. Fayez al-Banna is helping his sons prepare asphalt in front of their house, to fill in cracks caused by the war and prevent cold and rainwater from getting into the house.

Banna told Al-Monitor, “Although the house was not destroyed during the war, cracks were caused in the walls and ceilings. I am using this old way to fill the cracks. I do not know if it will work, but it does not hurt to try.”

Housewife Fatima al-Kayed has filled the gaps in the walls with fabric and used tape to prevent the flow of cold air from the cracked walls.

She told Al-Monitor, “In previous years, we used an electric stove for heating. But today, there is no electricity at all, which is why we are looking for alternatives to cope with the cold, and if we fail we will inevitably catch a cold throughout winter.”

Candles are a key substitute for some families in Gaza. They are used for lighting during power outages. However, Gaza residents still remember when two girls, Malak and Gana Sheikhel Eid, were killed and other family members seriously burned in March when a candle used to light their house during a power cut caused a fire that burned down their home in Rafah, in the southern Gaza Strip.

In December, Fayza Muammar suffocated trying to get warm from a coal fire in her home in the Khan Yunis camp in southern Gaza.

The Gaza international donor conference, which was held in Cairo on Oct. 12, succeeded in collecting $5.4 billion from donor countries to help the Palestinians. Half of the sum was allocated for the reconstruction of the Gaza Strip. The reconstruction has not yet begun.