High schools students in Gaza are struggling to study for their finals exams due to continued electricity outages and sweltering heat. 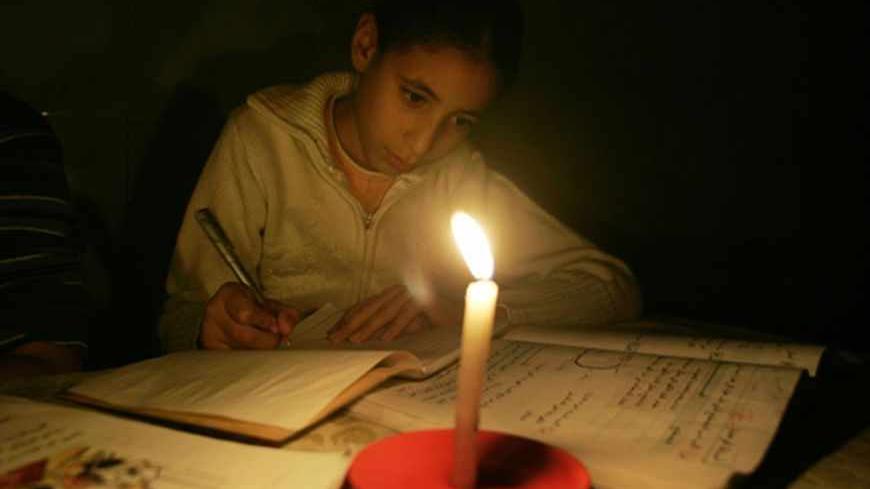 A Palestinian girl studies by candlelight during a power outage in Gaza, Nov. 13, 2008. - REUTERS/Ismail Zaydah

Amid all the political uncertainty and under extremely abnormal circumstances, Palestinian high school students both in the Gaza Strip and West Bank are taking their final high school tests known as Tawjihi.

I remember attending my Tawjihi tests back in 2007. The time couldn’t have been worse as the political turmoil in Gaza and the internal political fighting between the two largest political parties — Hamas and Fatah — was just starting to spill over onto the streets. Hamas had been in power less than a year, and the grave impact of Israel’s hermetic blockade of Gaza was ubiquitous as it affected almost every aspect of Palestinian life including that of high school students.

Seven years on, things have not changed — except perhaps for the worse. High school students still have to deal with  a great many challenges due to the abnormal situation they are caught up in, in addition to the issue of electricity outages.

Yousef Aql, 17, is a Palestinian high school student who lives in the Jabaliya refugee camp, in the northern Gaza Strip. His family of 12, he says, is doing everything it can to provide a calm and conducive environment to help him pass his tests successfully.

The biggest challenge Aql has to deal with as a high school student in Gaza is electricity cuts. Students are extremely restricted by the availability of electricity when they want to study, and therefore are not free to study when they would like to.

“Although we have been living under these conditions for years now, I'm still unable to get used to this. When there is a blackout at night, I have to use a candle or oil lamp as an alternative, and if the electricity goes off during the day it is impossible for me to stay at home, let alone study due to the unbearable summer heat,” Aql explained grimly.

He added, “I have to wake up in the middle of the night when the electricity is back on to resume my studies. I am forced to do this although it disrupts my sleep and makes me distracted most of the time.”

Due to severe oil shortages, locals in Gaza have been subjected to daily electricity cuts of up to 10 hours. Candles, kerosene stoves and power generators have become essential commodities in every house in the Gaza Strip.

Similarly, another high school student from Gaza, Mona al-Najjar, 17, said that high school students live under extreme pressure and endless tension as they are unable to schedule their studies properly. According to her, electricity cuts have become a nightmare that haunts the mind of every Tawjihi student in Gaza.

Najjar added that while some claim that generators have solved the problem of electricity cuts for Tawjihi students, not all families can afford a generator. This, she added, is in addition to power generators exacerbating the problem rather than solving it.

“We don’t have a power generator at home; therefore, I have to study by candlelight. Sometimes, I fall asleep while studying, and then I wake up in a panic thinking that the candle could have burned down the house. Moreover, our neighbors run their generators, which cause an irritating noise and distract me. I feel that my head is going to explode and I just want to leave everything and run away. It is painful.”

High school students have placed several calls to the government and responsible authorities in order to put an end to the persistent problem of electricity outages.

“We cannot solve this problem by ourselves. In fact, the electricity company also calls for an immediate solution to this crisis by increasing the amount of oil that is allowed to enter Gaza, particularly at this time of the year as high school students are taking their tests,” he stated.

Instead of directly addressing who should take responsibility for the ongoing electricity crisis in Gaza, Dardasawi put the main responsibility at this time on the local consumer in the Gaza Strip, calling on the local population to “show a level of national and moral commitment through the rationalization of electric energy consumption.”

In addition, Gaza’s Deputy Minister of Education Mahmoud Mattar told Al-Monitor that the ministry has taken into consideration the suffering of Tawjihi students and the challenging conditions they have to go through, when it has designed the tests in coordination with the Palestinian Authority’s Ministry of Education in Ramallah.

In the same vein, Ayyoub Abu Shaar, Gaza police spokesman, said that the police had finished all preparations and taken the necessary measures regarding high school tests. These, he said, included a temporary halt to licensing street and public parties as well as weddings to provide students with a calm environment fit for studying.

Mohammed Suliman is a Gaza-based writer and human rights worker. Mohammed obtained a masters degree in human rights from the London School of Economics. His writings appeared on different online publications including Al-Jazeera English, openDemocracy, the Electronic Intifada and Mondoweiss. On Twitter: @imPalestine