Palestinian students accepted into international universities may miss out on the academic year due to the blockade on Gaza. 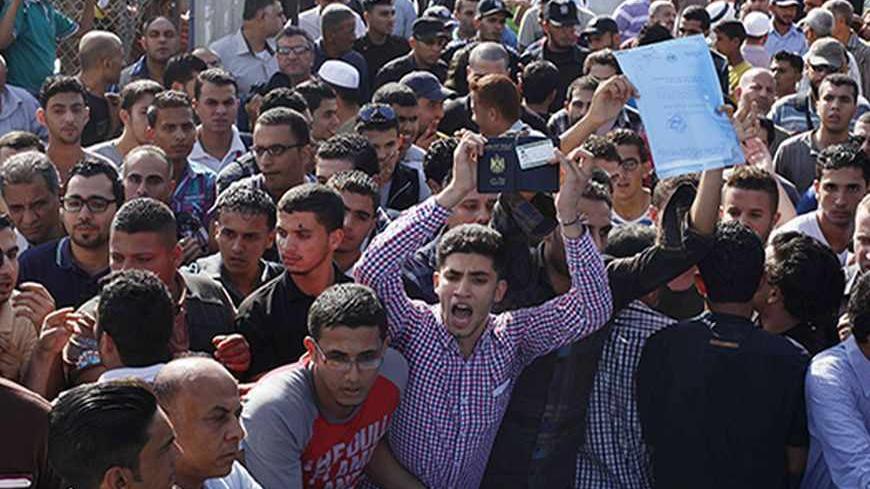 Passengers gather around the gate of Rafah crossing with Egypt as they protest against the conditions on the crossing, with hopes of crossing into Egypt, Sept. 18, 2013. - REUTERS/Ibraheem Abu Mustafa

GAZA CITY, Gaza Strip — Following the developments in neighboring Egypt and the dramatic fallout between the army-backed Egyptian leadership and the Hamas government in Gaza, the Rafah border crossing has been closed in the face of Palestinians seeking to travel outside of the Gaza Strip.

Yousef al-Jamal, a 23-year-old Gaza-based blogger and translator, won a scholarship for a master’s degree program in political science at the University of Malaya in Malaysia. Jamal has been trapped in Malaysia before, after he attended a conference there in July and wasn’t allowed to enter Egypt on his way back to Gaza. Now in Gaza, he has attempted to travel through the Rafah crossing twice, but has been turned back on both occasions.

Jamal is worried about losing his scholarship if he does not arrive in Malaysia next week, since his university has made an exception for him and extended the deadline of his scholarship for two weeks.

“I tried to travel twice last week when the Rafah crossing was open, to no avail. I waited long hours at the border and only a handful of students managed to travel. I had to change my flights and I am waiting to hear news about the border. The deadline of the scholarship was Sept. 22, 2013. The university promised to help, by extending the deadline one or two more weeks and I am worried that I might lose the scholarship,” Jamal said.

Similarly, Shad Abu Salama, 22, is an English-literature graduate who obtained a scholarship to pursue her postgraduate studies in Istanbul. She is nonetheless at a risk of losing her scholarship if she does not travel out of Gaza in time to join her program.

Describing the situation at the Rafah crossing, Abu Salama, who is also a blogger and an artist, said, “What I saw at Rafah border crossing was a gate of humiliation around which people are crowded on top of each other, roaming around the Rafah waiting hall randomly, waiting impatiently to hear some news that can revive some hope inside them and running after policemen asking for help and explaining their urgent need to travel.”

However, and against all odds, Rana Baker, a 22-year Palestinian student from Gaza, managed to overcome all the obstacles and travel to the UK to undertake her master’s degree at the School of Oriental and African Studies (SOAS).

Baker said that while her path to SOAS was by no means an easy one and filled with obstacles, for her, the experience of traveling through the Rafah crossing was “the most horrible part of it.”

The lives of Palestinian students, according to Baker, have been turned into an “endless cycle of waiting, following news about the border, and traveling and getting turned back.”

Before they decided to close the border following deadly attacks against Egyptian soldiers in the Sinai desert, Egyptian authorities had decreased the number of working hours to only four, allowing only 300 Palestinians to travel per day instead of 1,200 under Mohammed Morsi’s rule. However, the crossing has been closed three times since then.

Baker vividly described her situation while being trapped in Gaza.  “Every single day I glued myself to my computer, refreshing news websites every few minutes only to find that the border would still be closed for another day. It was very tormenting and I could not bear missing my MA program for no reason. I went to Rafah three times; I was returned on the first and second times but was finally able to travel the third time. I think I am very lucky. Lots of students are still trapped in Gaza, and, needless to say, it is unfair.”

While Baker’s efforts eventually came to fruition, thousands of others have failed to cross the Rafah crossing to access their universities abroad.

Palestinian students may, as a result, miss the new academic year while some face the prospect of losing scholarships which they worked tenaciously to secure.

Jamal contended that the closing of Gaza’s border crossings and the denial of the Palestinians of their rights, particularly the right to freedom of movement and education, constitute a form of collective punishment of the Palestinian people in Gaza.

“All people have the right to get in and out of their country with no obstacles, but this is not applicable to us here. Collective punishment is not acceptable. The Israeli occupation is responsible for this in the first place, because it's the responsibility of Israel as an occupying power to organize this process, then Egypt, then the PA, both in Gaza and the West Bank,” he said.

On Sept. 19, Egypt partially opened the Rafah crossing for two days, agreeing to a request by Palestinian Authority President Mahmoud Abbas to address humanitarian needs of the Palestinians in Gaza, particularly students and patients. Only 100 Palestinians, however, were allowed to travel.

Moreover, in a news release, the Palestinian human rights organizations council stated, “While it welcomes the Egyptian authorities’ decision to open the Rafah crossing for two days, it still believes that this is not sufficient particularly in light of the large number of Palestinian travelers stranded in the Gaza Strip. It also stresses, now more than ever before, the international community is under a moral and legal obligation to pressure Israel to lift its blockade and ensure a free flow of individuals and goods in and out of the Gaza Strip.”