A first-hand account reveals the extraordinary difficulties facing Palestinians at the Rafah crossing on the Egypt-Gaza border. 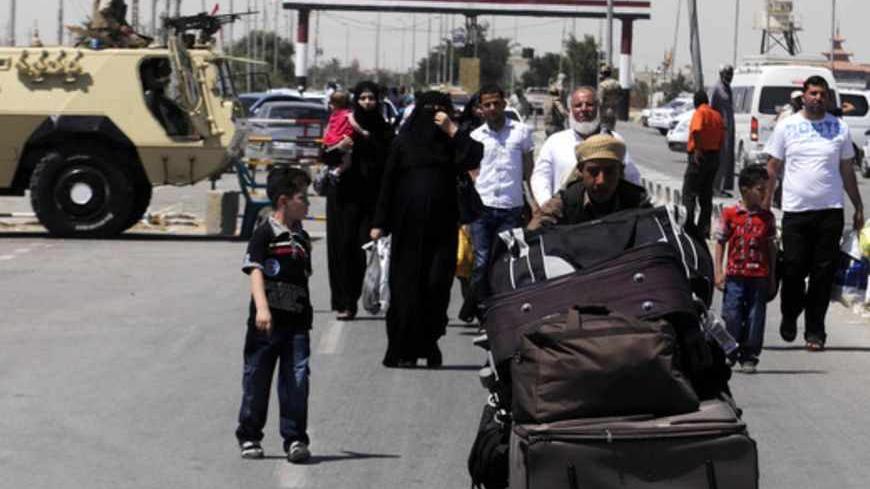 Palestinian travelers pass an Egyptian soldier standing guard on the Egyptian side of the Rafah border, to cross over to Gaza at Rafah city, some 350 km (217 miles) northeast of Cairo, May 22, 2013. - REUTERS

For Palestinians living inside the Gaza Strip, getting past the Rafah border crossing is almost an unattainable goal. I have experienced the humiliating conditions at the Rafah crossing several times recently.

My most recent journey through the Rafah crossing both ways further instilled in me the belief that the Gaza Strip is no ordinary place, regardless of how stable and quiet the surface appears to external observers.

On my way out of the Gaza Strip, I was turned back twice on May 17 and 18 as Egyptian police sealed off the crossing in reaction to the abduction of seven Egyptian security personnel.

While passengers were scattered in and around the Palestinian terminal, some lying on the grass puffing at cigarettes, some praying while others took a nap, the fate of many medical patients, children, students and businessmen was squarely placed at the mercy of the Egyptian police.

We anxiously anticipated any piece of news floating from the other side of the gate leading into the Egyptian terminal that we would finally get back onto the six queued Palestinian buses, from which we had escaped due to the excruciatingly sweltering heat. Time went by, and we were finally told to get onto the buses, only to have them drive us back where we had come from, back to the blockaded Gaza Strip.

The same scenario recurred on the second day. Many passengers had already missed exams, some their medical appointments and still others their flights.

I, for one, persuaded myself that my case was by no means urgent, and compared to several of those I met over the past couple of days, I needed not babble about myself being a victim of the Egyptian system or of the larger status quo.

Indeed, how could I complain about having my human rights violated and of being deprived of my right to freedom of movement, when on the other side lay thousands of Palestinian passengers who were stuck at the Egyptian Rafah terminal, unable to cross into Gaza, while I was able to return to the comfort of my home back in Gaza to wait?

In any case, three days on, the news was unexpectedly relayed to me that the border crossing was reopened. Without a second thought, I hastily packed my luggage and made my way to the Rafah crossing. Once there, I handed in my bus ticket and embarked on a bus which indeed drove us through the Egyptian gate into the Egyptian terminal.

I walked into the Egyptian terminal dragging my luggage behind me after having extricated myself and my luggage from the jostles of the mob of people stuck at the gate of the terminal with their luggage trying to get in. The hall was chaotic and overcrowded with extremely agitated passengers who seemed to be walking aimlessly all over the place.

Inside this crammed hall, one could witness the most outrageous and multi-layered degrading treatment of the Palestinians at the hands of the Egyptian police.

To start with, as we rushed to fill in the arrival form and hand it to the Egyptian clerks behind the glass, we were all condescended to, snapped at, driven away from the desk and ordered to wait until our names were called out.

Every once in a while, we would flock in close toward the desk as the Egyptian police called out the names of passengers whose passports had been stamped and approved for entering the Egyptian territories.

I spoke to Samir Zakout from Al Mezan Center for Human Rights, who recently returned to Gaza through the Rafah border crossing. Zakout was trapped for over six hours at the Egyptian terminal on his way back to Gaza, along with hundreds of other Palestinian passengers. The reason, they were told, was that the electronic registration system had broken down.

Zakout called the extreme conditions at the Egyptian Rafah terminal not suitable for human beings.

“Besides the degrading treatment and the process by which we are left continuously anxious and worried, the hall itself is extremely ill-equipped and has no proper facilities or services whatsoever. Tthe place is a complete mess. There is no clear drinkable water; the toilets are filthy. There are no microphones used when calling our names, so we have to chaotically gather around the police to hear our names, yet they would snub us for being disorganized,” he said.

In several cases, passengers who where unable to provide sufficient documents proving that they have a strong reason to enter Egyptian territory were denied entry. There are also many with their names on the "blacklist" and therefore indefinitely banned from traveling through the Rafah crossing.

As I wandered about the hall, near the corner on the other side, where the names of those denied entry are called out, I stood silently observing one young Palestinian lady who had just been denied entry. She grabbed her passport, bit her lip and fought back tears before she erupted, crying hysterically, hitting the wall with her fists while a man who looked to be her husband tried to calm her down.

The young woman would soon return to Gaza, the only place she is allowed to be. She was trapped in this tiny, overcrowded place, and this sense of physical imprisonment is most definitely what forced the emotion out of her.

My heart skipped a beat upon hearing my name called out. It was from the right corner, though. I was approved. I heaved a sigh before grabbing my passport and unthinkingly raced toward the gate, where I happily paid my arrival fees and walked out into Egypt. I exited the hall and took a deep breath.

I was now to go through what is, in my view, the smoothest part of the journey: a five- to six-hour night drive through the Sinai desert toward Cairo.