Twelve years have passed since Israel destroyed Gaza's international airport, and there's no hope it will be rehabilitated anytime soon. 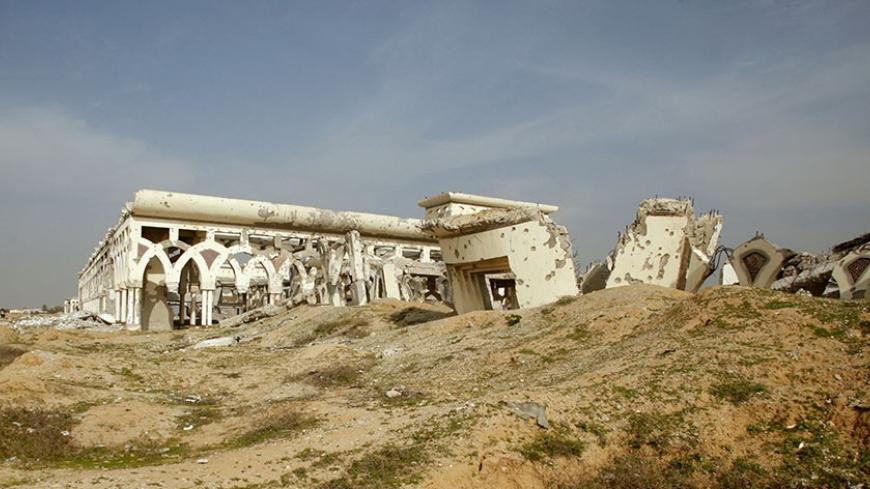 RAFAH, Gaza Strip — Not far from the border gate in Rafah, where thousands of travelers are held up after the Egyptian authorities closed the crossing, lies the Gaza International Airport. The airport is made up of three huge buildings adorned with Moroccan mosaics. The first is for VIP travelers and topped with a golden dome, the second is the departures/arrivals lounge and the third houses the Palestinian Airlines administration. Behind these structures stretches a long runway. The airport has a large main gate and another secondary one.

From afar, these buildings look operational, but as you get closer the destruction becomes apparent. There are no passengers or planes, and the buildings have been bombed out and emptied of everything but their outer structure. Even the stones that made up the tarmac have been stolen, and the runway has become a winter pasture for the sheep of nearby nomads. A horse’s cadaver lies nearby. 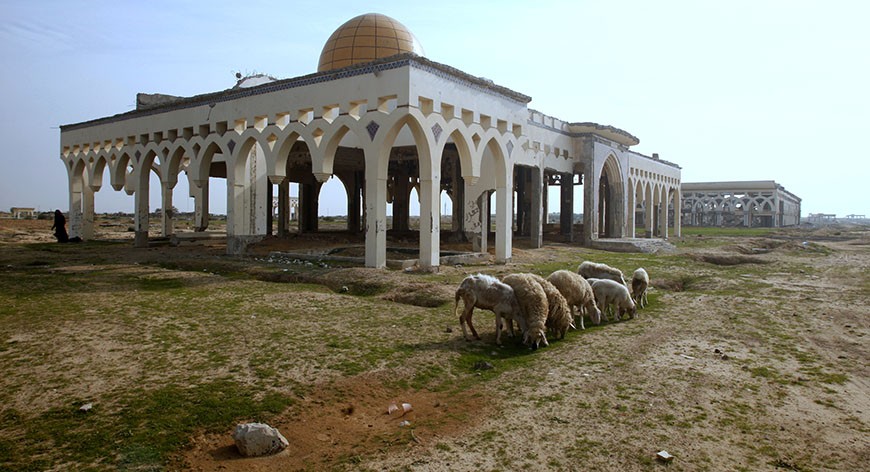 This is what the airport has become ever since Israel bulldozed many of its structures on Dec. 4, 2001. Eight days later, Israeli aircraft bombed the radar tower, and on Dec. 15 another strike completely destroyed the runway. On June 26, 2006, the Israeli military occupied the airport facilities and began using them as a military base.

The airport was opened by former President Authority Yasser Arafat in 1998 with funding from Spain, Germany and other countries. Moroccan architects took charge of its decoration and design. The ruins of the VIP hall, with its golden dome and mosaic walls, are the only testament to the airport’s distinguished architecture. A part of the airport premises was made into a landfill.

Nasma Sawarka, a 15-year-old shepherd, pointed to her house. She said, “I grew up seeing the airport next to our house, but the only thing I remember are the horrific sounds of shelling. Sometimes I look at the photos of my father, who used to work there.”

Her sister Israa, 18, came outside as we approached the house. Israa told Al-Monitor, “I remember the airport and the aircraft taking off and landing. These were beautiful days. My father and uncles worked there until the shelling. Then, our neighboring airport turned into a curse rather than a blessing.” She added, “After the bombing, we saw people looting the airport to collect building materials.”

Their grandfather Salam Sawarka,70, has clearer memories of the airport. He said, “If only these days would come back! They were the best. This small entrance near our house was reserved for use by President Arafat. I saw him several times and I also saw his plane.”

Gaza International Airport was the first of several hoped-for airports in the Palestinian territories, but now only Israeli airports and land border crossings lead out. Palestinians travel back and forth through the airports of Jordan and Egypt.

According to Khalil Shehin, a legal expert who heads the Economic and Social Rights Unit at the Palestinian Center for Human Rights, destroying the airport prevented millions of Palestinians from traveling and being reunited with their loved ones. Now they face high costs, exhaustion and humiliation at the airports and crossings in other countries. 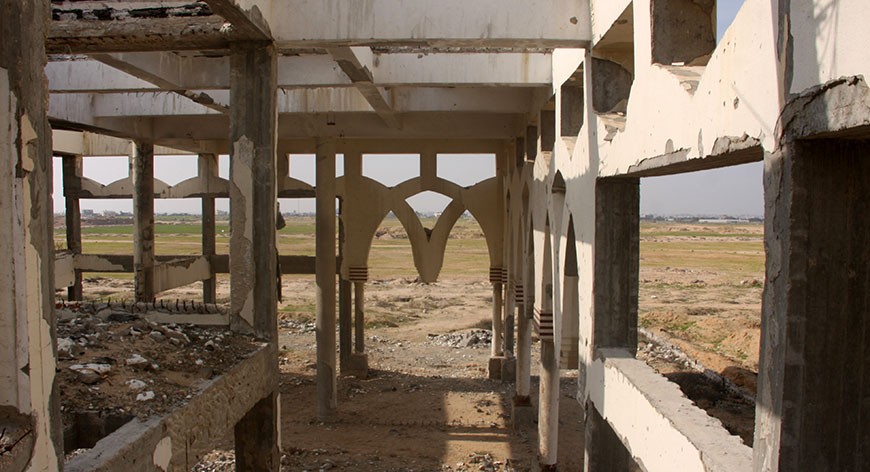 "Now we have no airport, even though we have a recognized passport," Shehin told Al-Monitor. "When there was an airport in Gaza, traveling was relatively easy. Now, any citizen who wants to travel [by plane] must leave Gaza a few days before his flight, to ensure that he arrives at the airport in time. This means spending the night in airport lounges," he added.

Gaza government spokesman Ihab Ghussein told Al-Monitor that it is the Palestinian people's right to have an airport on their territory, but the Israeli occupation has deprived them of one by destroying the airport, taking control of Palestinian airspace and placing an air, land and sea blockade on the  Gaza Strip. He added, "The siege that is currently in place obstructs the possibility of restoring the airport."

“The airport was of high importance for the Palestinians. It spared them the struggle of traveling through crossings and having to use the airports of other countries. It was a symbol of the sovereignty of the Palestinian state after the signing of the Oslo Accord,” said Shahaibir, noting that around 1,000 employees once worked for Palestinian Airlines as flight attendants, administrative employees, pilots, flight engineers and other workers. They all served more than 250 passengers departing from the airport daily.

“The airline had three planes: two Fokker 50s and a Boeing 727 donated by Saudi businessman Walid Bin Talal. However, these planes quickly stopped working,” said Shahaibir. He noted that the first flight to take off from the airport was to Amman, followed by Jiddah, Dubai, Cairo, Doha, Larnaca, Cyprus and Istanbul. The Boeing 727 was reserved for long flights.

Shahaibir said that there was a plan to develop the airport, yet the Israeli occupation did not grant the airline much time to implement it. He explained, “The losses inflicted by the destruction of the airport are in the tens of millions of dollars. There were only two planes remaining, which was based in al-Arish [in Egypt]. Both were used for short flights with a crew not exceeding six members. However, they have ceased operating since last July.”

Shahaibir showed Al-Monitor a copy of a Palestinian Airlines in-flight magazine, of which only three issues were published. In the May 2000 issue, Fayez Zeidan, the director-general of civil aviation, had announced intentions to begin service to Athens, Rome and Frankfurt.

Al-Monitor secured a copy of the magazine, which reported the launching of the first service route between Palestine and Russia. A Russian plane with 125 passengers had been the first to land at Gaza International Airport. There was another article talking about the signing of an agreement with the European Commission to fund the construction of a department for air cargo at the airport. This, too, was never implemented. 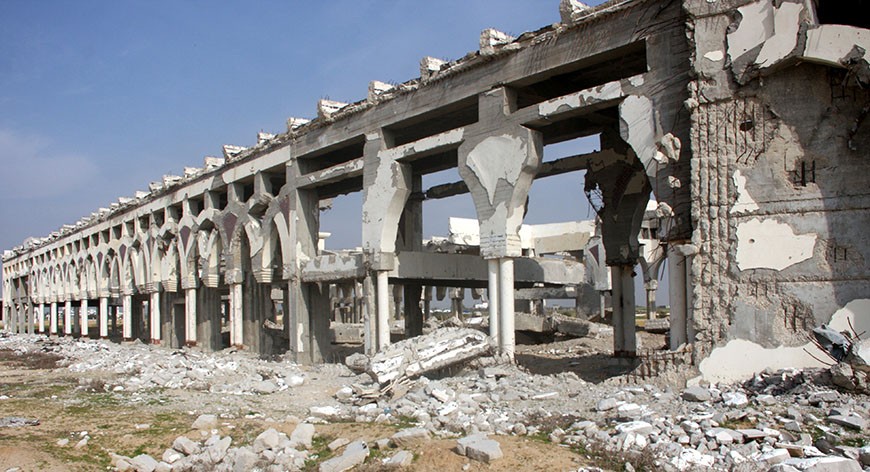 Had these plans and flights come to fruition, Palestinians would have been spared long years of suffering at the gates of the Rafah crossing.

Shehin noted that the destruction of the airport caused the cancelation of thousands of flights. Those affected included Gazans studying abroad who were returning to visit as well as travelers coming for tourism or conferences. Thus, entering and leaving the Gaza Strip became a task that was not guaranteed.

"This violates one's right to freedom of movement and travel," Shehin said. He added that the former was "guaranteed by international conventions such as the Universal Declaration of Human Rights and the International Covenant on Civil and Political Rights."

Not far from the remains of Gaza’s airport, the sense of entrapment is palpable in bus pilgrims gathered at the Rafah crossing, waiting hours to cross the border and begin the eight-hour journey by road to Cairo, hoping to make their flights to Saudi Arabia. There’s no guarantee they’ll make it through their first step, the gates of Rafah.