Though a UN envoy dismissed Defense Minister Avigdor Liberman's recent claim that Israel would be the "first to invest" in a Gaza airport as a "distraction," coverage of the minister’s remarks has drawn attention to a proposed UN-administered facility approved by both Hamas and the Palestinian president. 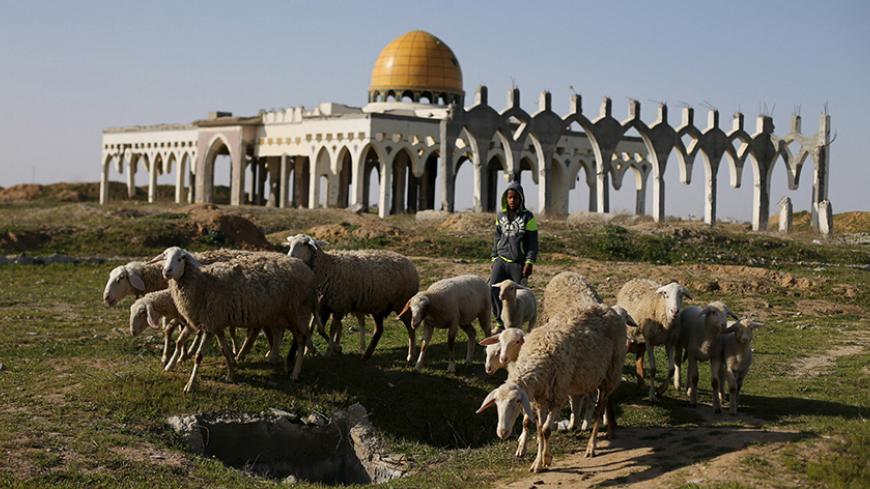 Few Israelis understood why their hard-line defense minister would even talk about a seaport and an airport in Gaza.

In an Oct. 24 interview with the widely circulated Palestinian daily Al-Quds, Avigdor Liberman offered the formula for a possible Gazan port and airport. “If they make the decision to stop digging tunnels, smuggling arms and firing rockets at us, we will be the first to invest in a port, an airport and industrial areas.”

The strange thing about this statement was that it didn’t include the usual Israeli call for completely disarming Gaza, and that Liberman volunteered to talk about the port and airport without being asked about them.

Ahmed Alkhatib, a Palestinian-American aviation visionary who has been advocating for a UN-administered airport for some time, was quick to note the opening provided by Liberman in the interview.

However, Alkhatib, the founder and director of Project Unified Assistance (PUA), a registered US nonprofit organization, was frustrated when UN special envoy Nickolay Mladenov dismissed Liberman’s statement Nov. 5 as a “distraction” that avoided addressing the real issues, such as large-scale unemployment in Gaza, which is almost at 50%.

Speaking to Al-Monitor by phone from San Francisco, Alkhatib said that an airport is a fundamental need for rebuilding Gaza, adding, “It will help stabilize the Strip and will contribute to implementing tangible improvements to the lives of Gazans.”

PUA’s response to Mladenov has attracted attention to its initiative to establish a UN airport in Gaza. The charity defines itself on its website as a "US-based humanitarian nonprofit organization advocating for the establishment of a United Nations operated and regulated airport in the Gaza Strip under a humanitarian, politically neutral framework.”

The airport would prioritize humanitarian supplies and transporting individuals with medical needs and would also offer its services to other passengers and products, depending on the arrangements made with Israel to meet its security needs, according to PUA.

Alkhatib told Al-Monitor that the concept is not new for either the UN or for Gaza, saying, “In the 1950s and 1960s, the UN operated an airport in Gaza, and that history is well-documented by the UN and others.”

Alkhatib’s idea is that the UN, working with third parties, would be fully responsible for managing the airport, avoiding the current political and security complications of travel. “The third party running the airport for the UN could be any country or organization that Israel would approve. It could come from NATO if that would put the Israelis at ease,” he said.

The idea is not about a Palestinian sovereign airport, the US-based Gaza native activist insisted, adding, “We need to overcome the current gridlock by finding a formula that can bypass Israeli and Egyptian restrictions in a way that addresses the needs of both parties.” Alkhatib does nevertheless believe that the airport could become Palestinian-run after 5-10 years of its successful operation, provided the right set of circumstances.

“The airport will be managed and administered by the UN and will be run independently, while at the same time, it will not interfere with Israeli airspace.” Alkhatib noted, adding that despite Israel's complete withdrawal from Gaza in September 2005, in reality, Palestinians are not free to travel. “So this will be a test of whether Israel will allow a UN humanitarian airport to be implemented or whether what it has been saying since 2005 about leaving Gaza is nothing but public relations talking points,” he said.

Alkhatib argued that the Israelis seem to be flexible so long as the project doesn’t affect their security. What is needed from Israel, he said, is “to allow UN planes to use a relatively narrow aerial corridor over the Mediterranean waters to allow for flight operations that will land and take off right on the southwestern coast of Gaza.”

He added that Israeli officials at the highest levels are aware of his project.

Alkhatib and his supporters in Gaza secured Hamas’ approval in October. “Hamas has not only supported the idea, but has scrapped a housing plan on the strip of land in the Mawasi area that is being suggested as the site for the proposed UN airport,” he said, adding that Palestinian President Mahmoud Abbas has also given the green light to the project and employees of relevant UN agencies working in Gaza are very supportive, albeit in a discrete manner due to the sensitivity of the airport issue and their roles.

The UN airport would require about $200 million for the initial phase, which could be completed in 12-18 months, said Alkhatib.

US President Bill Clinton and first lady Hillary Clinton joined Yasser Arafat for the ceremonial opening of an airport near the southern Gaza town of Rafah in November 1998. At the time, Palestinian Airlines was a godsend to the people of Gaza. From the Rafah airport, Palestinians in the Strip where able to fly to Amman, Cairo or Baghdad. In 1999, a Palestinian could travel from Amman or Cairo and reach his Gaza home within an hour or two, including the time it took for an Israeli security check.

After the destruction of the Rafah airport, Palestinian Airlines continued to operate for a few years out of al-Arish airport in Sinai, but that didn’t last long because of the Israeli siege and the security situation in northern Sinai. Today, one of Palestinian Airlines' Fokker airplanes is on lease in Africa while the other is being repaired.

Those were the golden days, Palestinian Airlines CEO Khaled Mubarak told Al-Monitor from his base in Amman, Jordan. "When the second intifada broke out in October 2000 and the Israeli airport liaison officer was killed, we were not able to fly. Israel dug up the runway in 2002 and prevented us from flying either way."

Freedom of movement is one of the dearest desires of people under siege. An airport in Gaza run by the UN or any other agency would do more to sooth the anger and pain of Gaza’s nearly 2 million Palestinians than any political speech or international resolution.

Palestinians dream of an independent state and the ability to travel freely, away from a departed occupier that is still very much present in the lives of every Gazan. While a UN-administered airport might seem like a compromise, it is far better than the current stalemate and continuous siege on the Gaza enclave.