Flights are being operated to the Qamishli Airport after the Damascus International Airport went out of service due to Israeli air strikes. 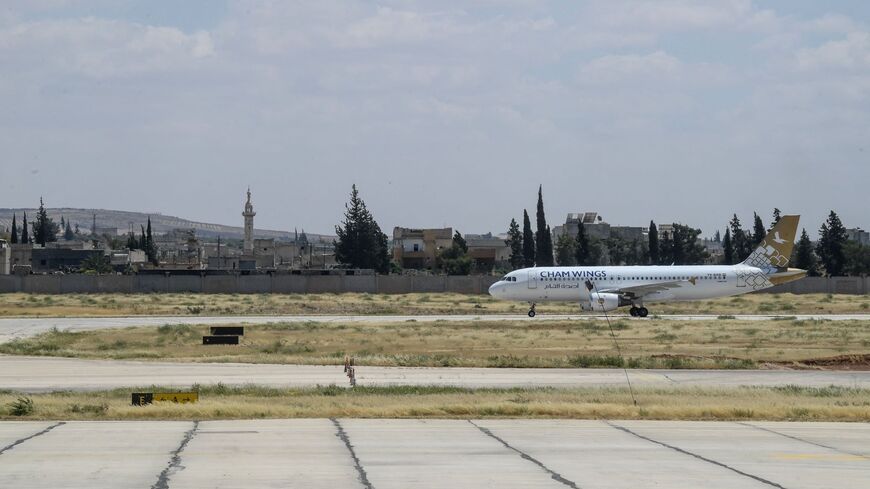 A Cham Wings Airlines Airbus A320-211 is pictured at the Syria's Aleppo airport after flights were diverted from Damascus airport following an Israeli strike last week, on June 15, 2022. Flights were halted at Damascus International Airport after an Israeli strike last week caused "sizeable damage" to its only operational runway, authorities said. - Photo by AFP via Getty Images

Cham Wings, a private airline close to the Syrian government, announced June 13 that it will start operating flights from Beirut to the Qamishli Airport in northeastern Syria, and from there to the Aleppo International Airport in northwestern Syria.

The announcement came days after the Damascus International Airport went out of service due to Israeli air strikes.

Abdul Ahad Daoud, the company’s agent in Hasakah province, said in a press statement that the company will fly from Beirut to Qamishli and back every Sunday, as well as flights between Qamishli and Aleppo every Sunday "until the Damascus International Airport is back to normal operations.”

The company had announced June 11 that it would transport passengers between Aleppo and Damascus via private buses.

Osama Sateh, director of business development and public relations at Cham Wings, said in a press statement that “the company diverted the flight route to the Aleppo airport after the Damascus airport went out of service,” and explained that “transporting passengers from Damascus, Homs and the rest of the provinces to Aleppo International Airport will be free of charge.”

On June 15, the Syrian Ministry of Transport announced on its official Facebook page that it is working round the clock to rehabilitate the Damascus International Airport. The reopening date has yet to be set.

For a direct bus trip, he said, "passengers would have to spend more than 20 hours on the road, and cross dozens of military checkpoints spread along the road between Qamishli and Damascus along a distance estimated at about 700 km,” he added.

Cham Wings was established in 2007 and accredited by the Syrian Civil Aviation Authority. It is headquartered at the Damascus International Airport.

In December 2021, the European Council imposed restrictive measures on 17 individuals and 11 entities, including Cham Wings airlines, for transporting migrants to Belarus amid what the council described as violations of human rights.

In December 2016, the US Treasury’s Office of Foreign Assets Control placed Cham Wings on the US sanctions list on the grounds of providing support to both the Syrian government and Syria’s flag carrier, Syrian Airlines.

On June 10, Syria’s state news agency SANA reported that Israel had attacked the airport, which “wounded a civilian and caused some material losses.” The Syrian Observatory for Human Rights reported that the Israeli airstrikes targeted warehouses belonging to the Lebanese Hezbollah and Iranian fighters stationed in the vicinity of the Damascus International Airport.

The airstrikes destroyed the control tower and navigation radar, in addition to the northern and southern runways, which were hit with three missiles each, according to the observatory.

The airport suspend operations, as the damaged runway was the only one in service after similar Israeli strikes in 2021 hit the second runway.

Shortly after the attack, Mikhail Bogdanov, Russia’s Deputy Minister of Foreign Affairs and Special Presidential Representative for the Middle East and Africa, summoned the Israeli ambassador to Moscow, Alexander Ben-Zvi. Bogdanov pointed out that the delivery of humanitarian supplies by the United Nations aviation services to millions of Syrians has been disrupted.

Bashir Nasrollah, a researcher at the Jusoor Center for Studies, told Al-Monitor, “Russia is seeking to completely control air traffic in Syria." The Qamishli Airport is completely under its control, he said.

On June 21, Cham Wings began operating flights to the Basel al-Assad International Airport in Latakia, which is also under the control of Russia, after flights were limited during the past few days to Qamishli Airport. A Cham Wings plane landed on Tuesday at the airport in Latakia, coming from the city of Sharjah in the United Arab Emirates, in the first flight to land at this airport since September 2015.

Samer al-Ahmad, a Turkey-based journalist who hails from Qamishli, told Al-Monitor, “The Qamishli Airport was equipped and expanded to turn it into an international airport before the outbreak of the revolution in Syria. Putting it into use again now comes within the Iranian-Russian competition to control the airports in Syria, as the Aleppo International Airport is completely under Iranian control; and since Russia owns the Hmeimim air base and the Airport in Latakia, it will have completely controlled air traffic.”