Iraq begins direct flights from Baghdad to Damascus after improvements in Syria's security, much to the delight of religious tourists. 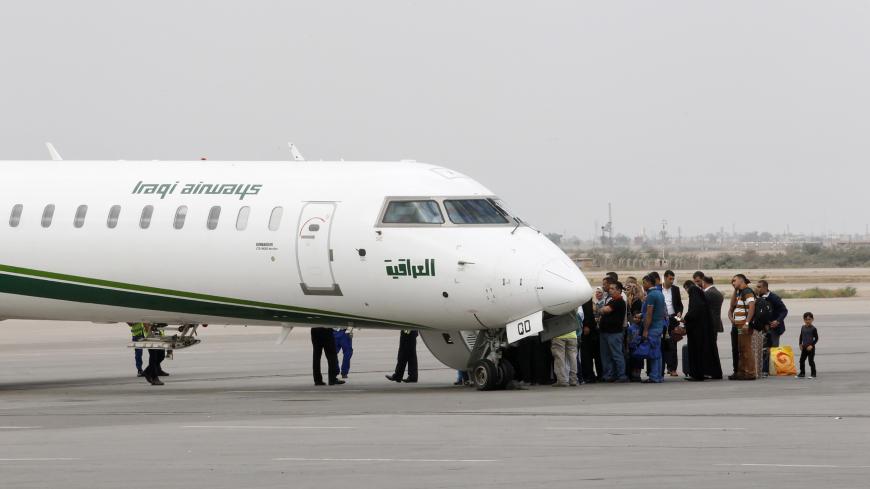 Following a seven-year hiatus caused by the economic embargo imposed on Syria and the unstable security situation, an Iraqi civilian airplane landed Aug. 20 for the first time at Damascus International Airport. Syria used this step politically and deemed it a victory for the Syrian army against terrorism, as was announced by the Syrian Minister of Transport Aug. 20.

In conjunction with growing air traffic, the director of Damascus International Airport, Nidhal Mohammed, revealed Sept. 12 that the number of arrivals to the airport increased by 20% over the same period last year, and the proportion of air freight also increased 15% from last year.

Prior to the return of the Iraqi airplane to Damascus, Iraqi Airways refrained from operating direct flights to Damascus, except for transit flights. Meanwhile, Syrian companies were transporting Iraqis to Damascus and vice versa — especially visitors to religious sites in Syria.

Such companies include Cham Wings Airlines, which began operating flights to and from Syria Dec. 1, 2017, as the Syrian Ministry of Tourism announced an increase in the revenues generated from religious tourism. FlyDamas Airline received a license from the Syrian Civil Aviation Authority to become a Syrian air operator with Iraq in 2015, but the license was suspended last January.

Laith Abdel Karim al-Rabii, director of media relations for Iraqi Airways, told Al-Monitor, “With the first Iraqi flight to Damascus after years of suspension, the Iraqi Airways office in Syria is getting ready to expand its operations and receive passengers wishing to visit Iraq.”

Rabii added, "Iraqi Airways, which made more than $1 million in profit from air cargo in June and July, will have its revenues increase with the resumption of flights to Syria — a country that has extensive commercial and economic relations with Iraq. Add to this the huge numbers of Iraqis wishing to visit religious sites in Syria.”

He stated, "Enhancing air transport between the two countries coincides with the security stability that is rolling out between the two countries. This step will have a positive economic impact on both countries, especially since many Iraqi markets still need Syrian goods. Moreover, religious tourism in Syria mainly depends on Iraqi visitors. Should Iraqi flights resume to Syria, then this will spare Iraqis a lot of time and money.”

Ghazwan Ramadan, the director of Fly Baghdad ground operations, revealed to Al-Monitor that the company "decided to operate regular flights between Damascus and each of the Baghdad and Najaf airports at a rate of four flights per week."

While this development is of interest to Iraqis and provides them with a quick and safe means of transport to Syria, Syrian officials consider this a political victory because it breaks the embargo that has been imposed on the Damascus International Airport since the start of the war in Syria. Add to this the sanctions imposed by Washington and European countries on Syria's flag carrier, Syrian Arab Airlines, and Syrian airports.

Iraqis have been keen to regularly travel to Syria by land — sometimes illegally. But the land route was completely cut off after the Islamic State (IS) seized the land between Iraq and Syria, causing the murders of dozens of citizens and the robbery of many buses transporting displaced people.

Iraqi Ambassador to Syria Saad Mohammad Reza announced July 9 that “Baghdad and Damascus are in the process of opening up the crossings between the two countries, especially al-Qaim-Abu Kamal crossing, in a bid to revive the economic and trade movement.”

After IS invaded Mosul and other Iraqi cities in June 2014, the number of flights over Iraqi airspace decreased due to security concerns. But the liberation of Iraqi territories from IS in 2017 resulted in the reopening of Iraq's airspace. Now, some 150 flights are landing in Iraq on a daily basis compared to between 20 and 25 airplanes that were operated by a limited number of regional airlines in the past.

Spokesman for the Iraqi Ministry of Transport Salem Mousa told Al-Monitor, “The security that has been established in the country since IS has prompted the ministry to enhance air transport. About 750 flights have used Iraqi airspace, and this increases Iraq's financial revenues through transit charges.”

Because of the huge influx of religious visitors to Syria, head of Imam Husayn Shrine's religious tourism sector Zaid al-Bir told Al-Monitor that “operating Iraqi flights would be very beneficial to the Iraqis wishing to visit Shiite sites in Syria such as the Sayyidah Zeinab Mosque, the Sayyidah Ruqayya Mosque and the holy shrines in Syria.”

He noted, “The Imam Husayn Shrine in Karbala has been organizing tourist trips to Syria for years at the price of $450 per traveler, but via Syrian aircraft.”

He added, “Syrian airlines schedule three flights a week to the airports of Baghdad, Basra and Najaf [to fly] a large number of Iraqis who like to visit religious shrines and tourism attraction centers [back to] Syria.”

Hammoud noted, “Iraq's desire to open the airspace between the two countries will support plans to expand air transport operations.”

Al-Monitor contacted the Syrian Arab Airlines office in Iraq, which responded by saying that “it does not give any press statements about the civil air transportation between Iraq and Syria.”

The airlines’ Facebook page, however, indicates that they operate flights between the Damascus airport and Iraq's Baghdad and Najaf airports at a rate of three flights a week each.

The Iraqi Ministry of Transport is seemingly pressing ahead with its plans announced in 2015 to increase flights between the two countries to 40 flights per week. This is in addition to the ministry’s plan to establish a railway linking the Syrian territory to Iran through Iraq. Such a railway would be of great importance to the two countries, which are seeking to overcome war and the security chaos while compensating for their deteriorating economic and trade relations.