The Palestinian Authority decides to shut down the Palestinian Airlines, which is seen as a symbol of sovereignty, citing financial burdens and maintenance costs of its only two aircrafts. 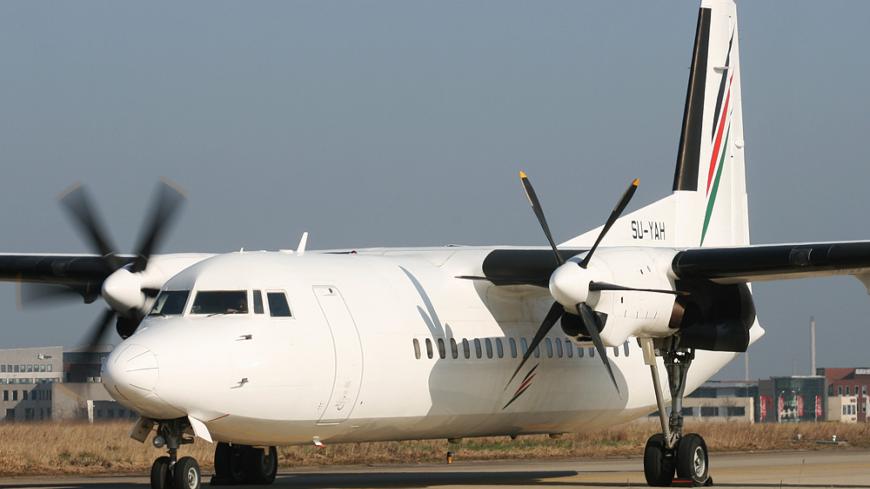 GAZA CITY, Gaza Strip — The Palestinian Ministry of Transport and Communications recently announced its decision to close and end operations of the Palestinian Airlines and sell its two airliners. The decision sparked an outcry among Palestinians who considered it to be a relinquishment of a symbol of the sovereignty of the State of Palestine.

The ministry said Dec. 29 that its decision was based on the high maintenance costs for the airline's two Fokker 50 aircraft, both of which are over 30 years old. One plane has been parked in Amman and the other in Cairo, as no airline company is leasing them in light of the coronavirus pandemic. This is not to mention the costs involved at Egypt’s and Jordan’s airports.

When the flights were operating, they would fly from el-Arish International Airport in Egypt for the United Arab Emirates and Jordan. Some 100 flights were flown per year on average, and most carried pilgrims heading for umrah and hajj in Saudi Arabia.

The Palestinians were forced to travel through Egypt and Jordan as Israel had destroyed their only airport in the south of the Gaza Strip in the wake of the outbreak of the 2000 Al-Aqsa intifada. Gaza’s airport operated for only two years after its inauguration in 1998.

Mouss al-Rahal, a spokesman for the Transport Ministry, told Al-Monitor, “Niger was the last country to lease one of the two Palestinian aircraft for six years until June, when it ended the contract due to the COVID-19 crisis.”

“Niger used to pay $96,000 a month for the aircraft rental, which contributed to maintenance expenses. As the contract was not renewed, the planes were put up for sale [in September]. But we still haven’t gotten any offer given the airliners are over 30 years old,” he added.

Rahal said the majority of the airlines’ pilots are retired due to their age, or lack modern flight training as there are no airports in Palestine. “This prompted us to take the decision to close the company and suspend its license,” he said.

Palestinian Airlines was founded in 1995 and started operating in the Gaza Strip in June 1997. The airline's base relocated to Egypt in 2000 after Israel destroyed Gaza International Airport. The company owned three airliners, including one Boeing 727, a donation from Saudi Prince Al-Waleed Bin Talal, and two Fokker 50 planes donated by the Dutch government to the Palestinian people in 2000.

An official at the company, who asked not to be named, told Al-Monitor that the decision to close Palestinian Airlines means giving up on the air operator's certificate, which allowed the company and the State of Palestine to be a member of the International Civil Aviation Organization and a member of the International Air Transport Association. This also means freezing Palestine’s membership in these organizations.

Before Palestinian Airlines moved to Egypt in 2000, it had some 1,000 employees, including pilots, engineers, technicians and administrative staff. This number then dwindled gradually, with the majority of employees laid off due to the financial crisis plaguing the Palestinian Authority and the airlines.

Samir Abu Mdallala, the dean of the Faculty of Economics at Al-Azhar University in Gaza, told Al-Monitor that he thought the airline should not have been closed. “This decision is tantamount to relinquishing a symbol of Palestinian sovereignty,” he said.

Abu Mdallala also said, “The PA’s external and internal debts amount to $4.5 billion. Shutting down the airlines will not help mitigate its financial crisis and burdens.”

He called on the PA to reverse its decision and to work on developing the airline company in a bid to generate profits for Palestinians, stressing that Palestinian Airlines' closure is a gift to Israel and a further excuse for it to refuse to allow the establishment of an airport in the Palestinian territories.

Fadi Abdel Hadi, a Palestinian heritage and folklore researcher, described in a Facebook post the decision to shut down the Palestinian Airlines as “painful,” posting several photos of the Gaza Airport with Palestinian airliners landing on its runway.

Fahd Abd, an engineer at Palestinian Airlines, said via his Facebook page, “This is a new naksa [defeat], sad news and a hasty decision by the Transport Ministry, which is ignoring all the sacrifices and efforts by late President Yasser Arafat and the builders of the Palestinian dream who endeavored so [Palestine] could have its own airlines.”

“We will stand up against this self-destruction with all available means even if we have to resort to the judiciary, since the reasons [behind this decision] are flimsy,” he added.