The longest wait: My journey out of Gaza

Al-Monitor's correspondent documented her own journey from Gaza into Egypt during the Rafah crossing's brief opening in early June. 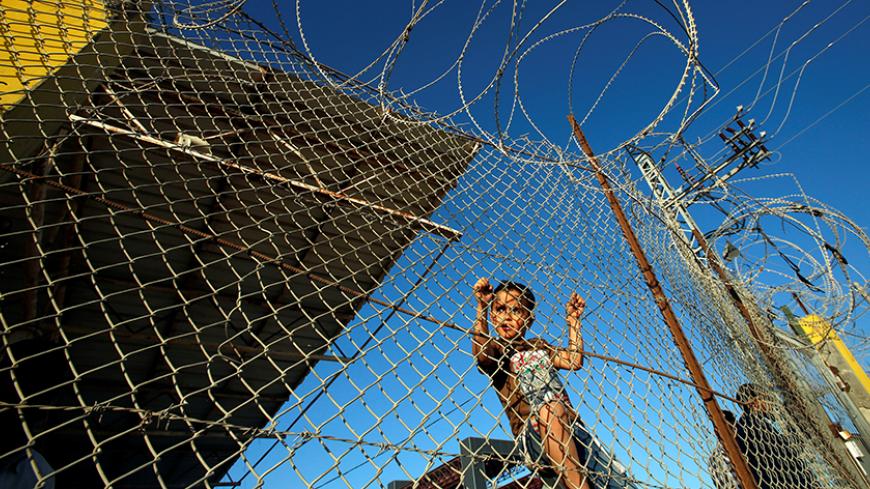 A Palestinian boy stands behind a fence as he waits for his relatives to return to Gaza from Egypt through the Rafah border crossing, after it was opened by the Egyptian authorities for two days for the first time in three months, in the southern Gaza Strip, May 12, 2016. - REUTERS/Suhaib Salem

CAIRO, Egypt — In July 2015, I applied for permission to travel at the Abu Khadra government complex — the official application center for all those who want to travel from the Gaza Strip through Rafah — in Gaza City, and found myself as number 10,962 in line.

Exiting Gaza now is dependent on luck and the convergence of many factors. Not all the buses scheduled on the first and second days of the crossing’s opening were permitted to leave due to obstacles set by Egyptian authorities, which pushed back my slated departure time, and only luck would determine whether I would be able to leave on the fourth day.

June 5 arrived. At 5:30 in the morning, I started my journey south. It was clear that the Hamas-led security forces were trying to maintain order in facilitating the passage of tens of thousands of travelers attempting to pass through the bottleneck.

My number assigned me to the first bus, which I boarded at 7. Meanwhile, talk spread among the waiting crowd that another class of buses carrying people who paid Palestinian middlemen up to $3,000 each had been permitted to bypass the line and leave.

Felesteen reported June 7 that since the beginning of 2016, the independent operators of those buses had amassed $5.4 million during the nine days the crossing was open this year.

Through the years, I have seen many people bidding farewell to loved ones at the Rafah crossing, but this time, the goodbyes seemed different to me, more final. Since Egypt's former Muslim Brotherhood-affiliated President Mohammed Morsi was deposed in July 2013, the Egyptian authorities have kept the crossing almost completely closed — to punish Hamas, which controls the Gaza Strip and is considered an arm of the Muslim Brotherhood — and allow it to reopen every few months for only a couple of days.

In October 2014, 34 Egyptian soldiers and officers were killed and dozens were wounded after armed men attacked a military checkpoint. President Abdel Fattah al-Sisi declared a state of emergency in some regions in North Sinai to last three months, and has been extending this period ever since.

Gaza is currently going through some of the hardest days of the siege ongoing since 2007, with strict travel conditions imposed on travelers who want to cross the Erez/Beit Hanoun crossing between the Gaza Strip and Israel. The Rafah crossing is nearly always closed while the delayed reconstruction process faces delays, poverty rates increase and prices skyrocket.

The mother of 19-year-old Mosleh al-Darbi stood beside us, bidding farewell to her son with tears streaming down her cheeks. He was not going far — only Egypt's Minia University to attend medical school. The bus had barely advanced a few meters when a voice cried out “Mosleh, Mosleh.” It was his mother, who ran after the bus and jumped on to give him one last hug, knowing full well that it will be virtually impossible for him to return or for her to leave Gaza to visit him anytime soon.

Mosleh’s mother was not alone, and tearful goodbyes were the norm around us.

There were smiles all around as we returned to the bus. We moved forward a few meters, but the bus stopped again under some cinchona trees. We disembarked and waited another hour, toddlers wilting in the heat as their mothers doused their faces with water.

It was now 11 a.m., 10 a.m. Egyptian time. Passengers began to get acquainted, among them journalists taking pictures. We all got back onto the bus, where the engine noise had become the sound of hope. We moved forward another few meters before stopping once again, this time opposite an Egyptian tank that guarded the main gate. We remained in the heat for another two hours as other buses piled behind us under the cinchona trees.

Despair filled our hearts as the hour neared 1 p.m. Finally, an Egyptian officer in civilian clothing approached, stood in front of the tank and motioned the bus forward amid screams of joy from the passengers. We lurched forward and entered the Egyptian border terminal. The Palestinian mobile network signal was lost and everyone breathed a sigh at leaving Gaza — but our relief was short-lived.

Inside the Egyptian terminal, there was no semblance of organization or cleanliness. Piles of dirt lay everywhere and garbage containers overflowed. Hundreds of passports, including mine, had been surrendered the previous day and were stacked in empty chairs as we waited for our names to be called.

Surrounded by her three daughters, Umm Yara told me, “We slept here last night because they lost our passports, which they now promised to look for. Until then, we wait.”

The terminal was overcrowded and the noise unbearable. An Egyptian officer yelled at one of the mothers and another threatened to bar a young man from traveling. Insulting the travelers seemed intentional, though no one was brave enough to complain.

I waited to be called. Most of those ahead of me were barred entry into Egypt and transported directly to the airport as they held foreign visas and residency permits allowing them to travel to other countries; others were permitted entry into Egypt proper. All was the sole discretion of the officer in charge and his acceptance of the travelers' paperwork and pleas for understanding.

Most families and youths who have foreign visas, residencies and passports are taken directly to the airport for transit to these countries. They are then put in small rooms like jail cells with guards until it is time for their flights. Those non-Egyptians who are not in transit to somewhere outside Egypt need someone to specially coordinate their entry into Egypt. Without such coordination, they are taken back to Gaza.

After another few hours’ wait, my name was called. I finally exited the Egyptian terminal at around 5 p.m. and endeavored to find a car that would take me out of North Sinai before the 7 p.m. curfew came into effect.

I thought that my ordeal was over, but the usually seven-hour trip to Cairo took 12 hours due to the many roadblocks manned by the Egyptian army and other security forces. My luggage was searched many times, and my passport inspected so often I lost count. At the Maydan roadblock, west of el-Arish, soldiers fired into the air, scaring us to death. The driver, who lives in el-Arish, explained, “They fear attacks by armed factions, especially at night.”

My tired feet aching in my shoes, I waited for the ferry to arrive and transport the cars to the opposite bank of the Suez Canal to Ismailia, where, according to my driver, there were no more roadblocks and the danger would be over.

Aboard the ferry, even the breeze seemed different. Most of those who took that first bus out of Gaza were there, and we greeted each other, congratulating our fellow travelers for successfully maneuvering through the maze.

Standing on the deck, young Mosleh gazed into the shimmering waters, perhaps reminded of his mother’s tearful eyes as she wept over his escape.